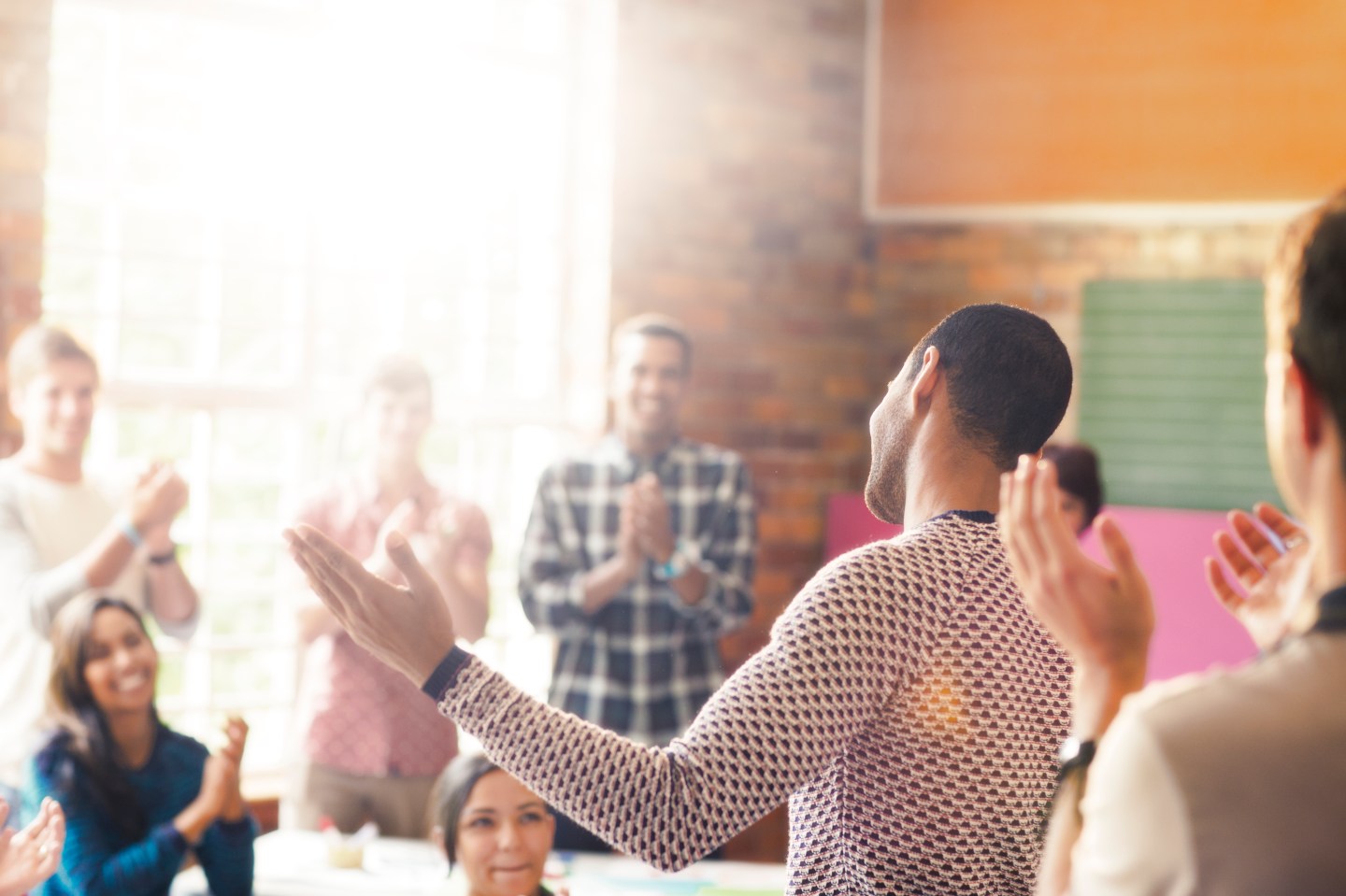 The next time you have to speak in front of a group, give some thought ahead of time to “what success would look like,” says Bill McGowan.

Most people are so anxious to get a formal presentation over with, he explains, that they hurtle through it. “This flattens out your tone of voice,” he says, “so that your listeners doesn’t know how to interpret what you’re saying” and the point you’re trying to make gets lost. Instead, he says, “I ask our clients, ‘How would you tell this to a friend over lunch?’ You want the pitch of your voice to reflect your message, whether it’s inspirational, exciting, or discouraging.”

A former network TV news producer, McGowan has witnessed more than his share of ho-hum speaking styles. He’s spent the past 15 years as CEO of Clarity Media Group, coaching the likes of Sheryl Sandberg, Jack Welch, Eli Manning, and NFL commissioner Roger Goodell on how to keep an audience riveted. McGowan also wrote a book, Pitch Perfect: How to Say It Right the First Time.

Since many people make New Year’s resolutions to become more effective speakers, McGowan has a few suggestions he describes as “pretty simple fixes.” Try these:

Slow down and embrace pauses. “Most of us are deathly afraid of silence,” says McGowan. “We kid ourselves that, to sound intelligent, we must have a steady stream of audio spilling out of our mouths.” The trouble is, letting our tongues get ahead of our brains produces what he calls “dreaded filler words” like “uh” or “um.” Speak in shorter sentences instead. End each with a period, and take a breath before the next one.

Don’t use jargon-y, overcomplicated phrasing. Speakers often make the mistake of thinking jargon makes them sound smarter, McGowan observes. It doesn’t. “For instance, why would you ever substitute ‘We need to make a decision on this soon’ with ‘We’re rapidly approaching a choice point on this’?,” he says, adding, “Go ahead, laugh. I heard that one recently in the boardroom of a Fortune 100 company and almost fell out of my chair.”

Avoid the words “perspective” and “standpoint.” “This is one of the most mind-numbing verbal habits in corporate America right now,” McGowan says. “Instead of saying, ‘How are we doing against our competitors?,’ we somehow feel the need to say, ‘Looking at this from a competitive landscape perspective…’ I’ll take the former over the latter any day.”

Try not to begin sentences with “so.” “Like most trends, I’m pretty sure this one started in California, where people in tech companies would begin every spoken thought this way,” says McGowan. When the “so” is drawn out into more than one syllable, “it makes your contribution sound ponderous.”

Banish “kind of” and “sort of” from your vocabulary. The habit of modifying statements this way may have come into vogue to prevent us from sounding too opinionated, McGowan notes. “But there’s something terribly wrong when you hear a company’s leader describe a key hire by saying, ‘She was sort of the best person out there,’” he adds.

Have the courage of your convictions, McGowan says: “What the CEO, or anyone else, should be saying is simply, ‘She is the best person for the position.’” Too many presentations, he adds, start by combining “so” and “sort of,” as in, “So I thought I would sort of quickly walk you through what’s been happening.” Trying to sound humble can just make you sound unsure of what you’re saying, or as if it’s not important, or both.

Mind your body language. It might seem weird, but McGowan maintains that how high your chair is, in relation to a conference table, makes a big difference in your credibility. “This is why TV news anchor desks have been getting lower and lower since the 1980s,” says McGowan. “Studies show that, the lower the table in front of you appears, the more authoritative you seem.”

Before you sit down in a meeting where you’ll be speaking, McGowan recommends discreetly “reaching for that lever under the chair seat and raising your chair a couple of inches.” Then, keep your hands visible in front of you, not in your lap, and lean forward. “If your shoulder blades are touching the back of the chair, you’re not sitting forward enough,” McGowan says. You can “send a subliminal message that what you’re saying is both substantive and has conviction behind it” by perching on the edge of your seat, he explains. Just don’t fall off.