Ford: We’re the First to Test Self-Driving Cars in Snow 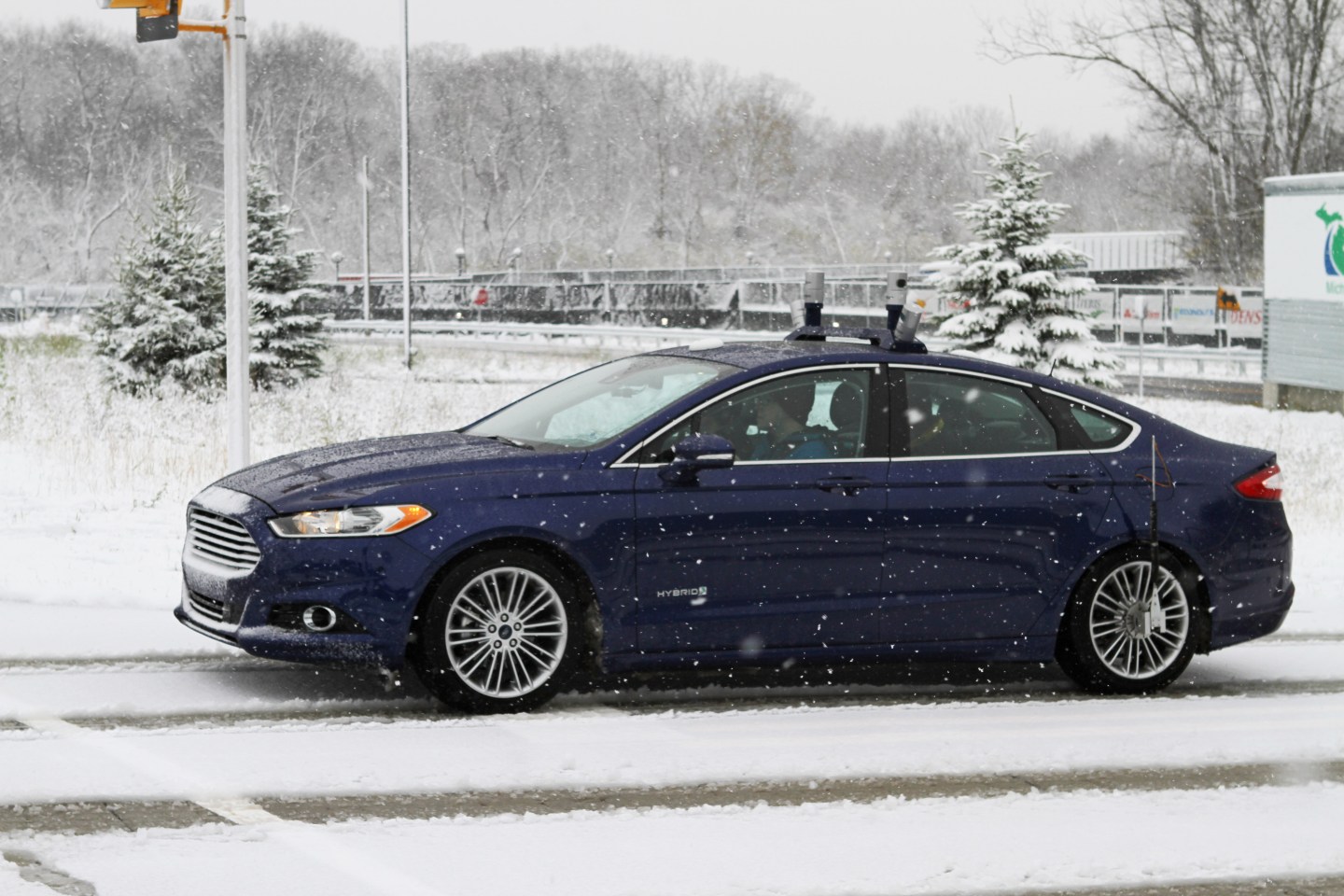 Snow is one of the biggest technical hurdles preventing widespread deployment of self-driving cars. Slush, snow, and freezing rain can obscure roads and lane markings as well as muck up sensors, which act as a car’s eyes.

Ford (F) says it’s testing its autonomous vehicles in snow-covered environments as part of its plan to eventually provide self-driving cars to the public. The Dearborn, Mich.-based automaker has dubbed this project “snowtonomy.”

Ford’s winter weather testing takes place in Michigan, including at Mcity—a 32-acre simulated real-world urban environment at the University of Michigan. Ford will show a snowtonomy demo at the North American International Auto Show, which starts Monday in Detroit.

The demo will help people understand how its car differs from other vehicles with semi-autonomous or autonomous technology, says Jim McBride, Ford’s technical leader for autonomous vehicles. “A lot of the other vehicles, particularly all of the semi-autonomous vehicles, rely on seeing a four-inch wide strip of white paint on the road—they’re looking for a lane marking,” McBride says. “We’re not reliant on a single camera to locate four inches of white paint.”

Ford uses LiDAR, light-sensitive radar, which emits short pulses of laser light to allow the vehicle to create a real-time, high-definition 3D image of what’s around it. LiDAR senses nearby objects and uses cues to determine the best driving path.

Ford’s self-driving cars are also equipped with high-resolution 3D maps, which include information about road markings, signs, geography, landmarks, and topography. When a vehicle can’t see the ground, it detects above-ground landmarks to pinpoint itself on the map, and then uses that map to drive successfully in inclement conditions, the company says.

“When we talk about cars that are fully autonomous, we’re going [to] tackle driving scenarios that you would expect a human to handle,” McBride says. “And humans handle deteriorating conditions and weather, particularly if you live in place like Michigan that can happen rapidly.”

“You can’t have a final end product that throws up its hands and says I surrender every time it rains or snows or there’s some adverse condition.”

WATCH IT: A week before Detroit, it was all about cars at CES

Ford says it’s the first in the industry to conduct such tests. And at least among other traditional automakers that may be true. No other automaker has publicly shared information about self-driving cars in snow.

However, just a few days ago Google issued its monthly self-driving car report that described how its vehicles handled recent rains in Mountain View, Calif., where the company is headquartered and conducts its tests.

Google also said it’s beginning to collect data taken during rainy and snowy conditions to ensure self-driving cars can drive in any weather. This doesn’t necessarily mean Google has actually driven any of its 53 self-driving vehicles in the snow—yet. The company could be running its software through tests that mimic snowy conditions.

Ford recently announced it was tripling the size of its self-driving car fleet. Meanwhile, in December, Ford enrolled in the California Autonomous Vehicle Testing Program, which already includes companies like Nissan, Volkswagen, and Google.