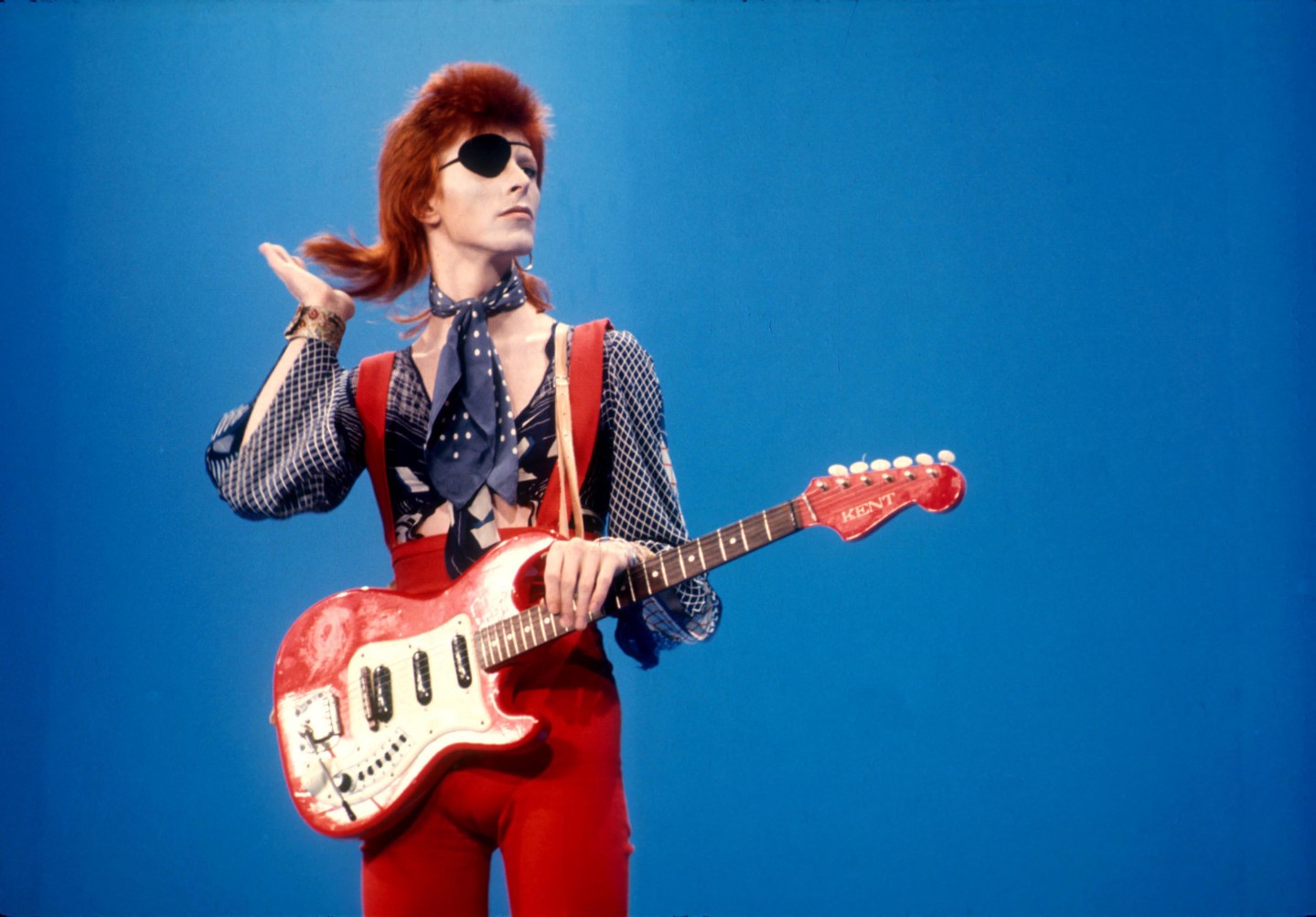 Editor’s note: Music legend David Bowie passed away early Monday after battling cancer for 18 months. Bowie’s career spanned more than five decades, filled with music that blended different genres and new personas. In addition to his musical prowess and innovation, though, Bowie also often proved himself a visionary when it came to the business aspects of his music. The Thin White Duke recognized early on that the Internet would likely upend the music industry’s traditional business model and he also helped pioneer a method for artists to capitalize on their catalogs by selling interest in his future licensing revenue in the late 1990s.

In this 2003 article from our magazine archives, former Fortune editor Andy Serwer looked back at the prescience of Bowie’s move, which came just as the industry’s so-called “Golden Years” were nearing an end.

Ziggy played guitar. Turns out he wasn’t too bad at playing Wall Street either. As you have probably heard, Bowie bonds, Wall Street’s own space-oddity securities, have been in the news again. And the news hasn’t been good: Moody’s has placed the bonds under review because of questions about “how much revenues [the songs] have been generating,” says Moody’s analyst Jay Eisbruck. That means simply that there is concern that the music catalog is earning less than it used to and at some point may no longer provide enough cash to pay bondholders. Behind the music, though, are some other interesting moving parts.

First, a refresher. Ziggy, a.k.a. rock icon David Bowie, sold his music rights for $55 million six years ago to a group of bankers who issued bonds backed by Bowie’s residuals. Prudential and other insurance companies bought the bonds, which are rated A3 and yield about 8%. Everybody predicted that would usher in a wave of deals by rock & rollers and songwriters. And though a few followed Bowie’s lead—such as James Brown (“Good God!”) and the Isley Brothers (“Fight the Power!”)—it never became the next big thing for the music biz or Wall Street.

Over the years a few firms have dabbled in the business—which totals only about $200 million—but this small, high-profile niche has mostly been the domain of David Pullman, a rather idiosyncratic banker with his own boutique firm. Pullman, who early on worked at the infamous broker Gruntal, has been a party to headline-grabbing lawsuits involving his former securitization partners—that one for billions—and the co-op board in his Manhattan apartment building.

Bowie and his deal were considered cutting-edge at the time (isn’t he always?), but in retrospect the Diamond Dog is looking positively clairvoyant! (Bowie declined to speak to Street Life for this article, which is too bad because I had some fantastic ideas for costumes and such….) Think about it. Bowie sells the rights to his catalog in January 1997, before most of humankind had ever heard the little phrase “file sharing.” (I call it file stealing.) How smart or lucky was that?

I recently spoke to Pullman about the situation, and he insisted that the review by Moody’s was a non-issue. (“Rebel, Rebel” played in my ear while I was on hold for him. Cute.) “I think it’s great,” he said with a chuckle. “It’s created a resurgence in interest in these securities. Look, the bonds would still be investment-grade anyway. They still pay out close to 8%, and you wouldn’t have lost 85% or more of your investment like you did if you bought [stock in] EMI or AOL.” Okay, fair enough. But, bottom line, would Bowie be able to get the same $55 million if he had tried to sell his rights today? “That’s tough to say,” responds Pullman. “There were many unique aspects to that deal.” Uh-huh.

Other music-securitization deals are not under review. That speaks to some special qualities of the Bowie bonds. “Most of the other transactions have revenues that are generated in larger portion by music publishing rather than record-master royalties, and music publishing has tended to hold up better than record-master royalties,” says Moody’s Eisbruck. Music publishing rights are when the song is licensed to be played by another musician or is played on the radio. Record-master royalties are the dough that rolls in from sales of CDs. So Ziggy’s sales these days aren’t so “Hunky Dory.” Another point: Bowie bonds are guaranteed by wheezing record giant EMI—whose debt ratings were cut to junk in March—which has been getting skewered by music pirates.

Again, Pullman is unfazed by the facts. “Most songs being pirated are by younger artists. And anyway, file sharing creates greater interest,” he says. “Even if there was a 5% or less drop in revenues from publishing, there are so many other new venues for music. For instance, there are 500 channels on your TV with music being played.”

Okay. Shifting gears, I ask him about the situation in his co-op (detailed in a New York Times article), where fellow shareholders voted to throw him out after years of acrimony between him and the board and other residents involving accusations by Pullman of everything from assault to Nazism. What’s the latest with that? “I still live there,” he says. As for Pullman’s lawsuit against his former securitization partners, a judge recently dismissed the case. Pullman’s appealing.

So let’s put all this together: File sharing is beating up the music biz and is potentially nicking Bowie bonds. David Pullman continues to make waves. And then there’s David Bowie, who took his money off the table years ago. Nothing’s going to touch you in these golden years? Easy for you to say, Mr. Bowie.

This article was originally published in the August 2003 issue of Fortune.