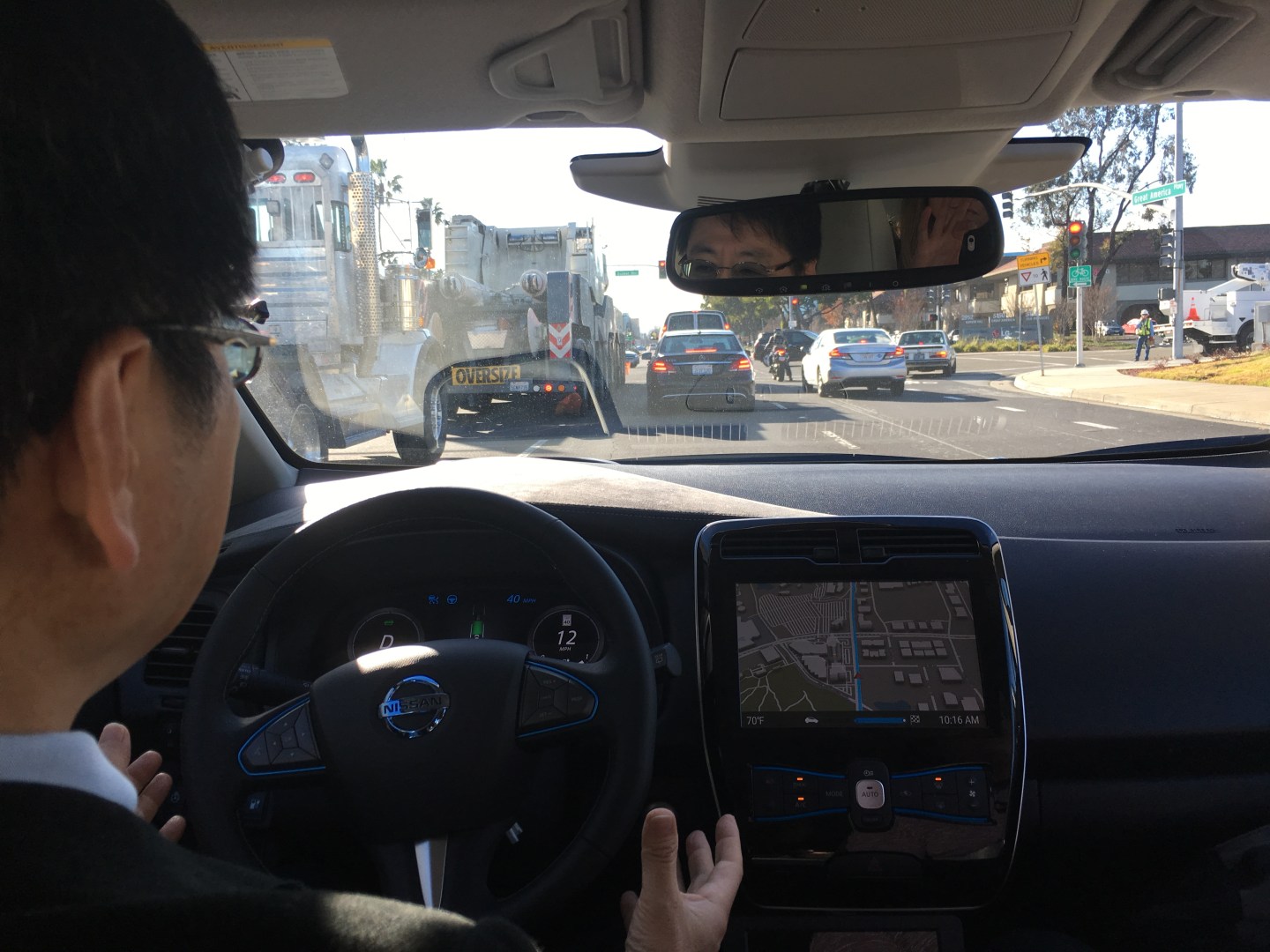 “Stop, stop, stop,” Nissan engineer Tetsuya Iijima repeats quietly, with only a slight touch of worry in his voice, as the self-driving car that he and a group of journalists are riding in creeps slightly into a busy intersection in Sunnyvale, Calif. on Thursday afternoon.

The light-gray autonomous all-electric LEAF, made by Nissan, rolled to a stop short of being in any real danger—to the relief of the worried journalists inside. Using a combination of 12 cameras, four side-panel laser scanners, a trunk full of computing power and access to detailed mapping data, the self-piloted car can mostly drive itself. Iijima, Nissan’s general manager for automated driving tech, was able to sit with his hands off the wheel—at least mostly—during our short ride.

The ride was a look not-so-far into the future of driving, as envisioned by one of a handful of companies racing to develop autonomous car technology. “We’re going to the freeway next,” Iijima announces calmly as the car heads toward Highway 237. The passengers appear noticeably concerned.

The test drive was the first public one of Nissan’s self-driving electric LEAF in the U.S. using this particular combination of sensors. The company showed off the configuration for the first time in Tokyo a couple months ago. It’s “immature” technology right now, says Iijima.

Nissan brought its self-driving car to Silicon Valley to start testing it on U.S. roads. The company’s Silicon Valley Research center, which hosted a media event unveiling the technology and other projects on Thursday, is critical for Nissan’s research into artificial intelligence and connected cars.

Despite the LEAF’s success in chauffeuring a Fortune reporter, Nissan plans to move towards self-driving cars in a much more cautious, methodical manner than companies like Google (GOOG). As with its electric cars, Nissan is focused on bringing self-driving features to the mass market.

The company plans to commercially introduce self-driving features—like autonomous driving in traffic jams and hands-free lane changing—when the cost is low enough and safe enough for its bulk mainstream car lineup. Currently the sensor and computing technology used for the self-driving Nissan LEAF we rode in, costs many times more than ones Nissan would use on its commercial Nissan LEAFs.

We’re not building autonomous technology to be “beta-tested” “on a few vehicles,” said Nissan CEO Carlos Ghosn during the event on Thursday. Instead, Nissan and its partner, French automaker Renault, plan to add incremental autonomous features to ten vehicle models over the next four years. This is not about “replacing the driver” but about “empowering the driver,” Ghosn says.

Self-driving cars are the hottest technology in Silicon Valley these days. At the Consumer Electronics Show this week, automakers like Ford (F), Toyota (TM), Volkswagen, and GM (GM), all showed off their latest technologies. Like with Nissan, many of these car companies have research centers in Silicon Valley that seek to attract the most talented Bay Area engineers and partner with the leading tech players.

Meanwhile, Valley tech giants like Google, as well electric car upstart Tesla (TSLA), are building their own self-driving car technologies. Tesla premiered autonomous lane changing and driving on its latest Model S cars with an over-the-air software update a couple months ago. That technology attracted considerable attention, as well as some worry about reckless driving.

Unlike Tesla’s approach for its pricy six-figure cars, Nissan and Renault are heavily focused on creating this technology for mainstream $30,000-priced cars. Ghosn referred to the $100,000 electric car as “a niche.” The ten vehicles that will get autonomous features will be “mainstream, mass-market cars at affordable prices,” the partners said in a press release.

Nissan took the same approach with its electric cars, which it introduced years ago. The company has sold almost 300,000 of them, including about 200,000 of its reasonably-priced LEAF model.

Nissan and Renault don’t want to just move into autonomous vehicles in a step-by-step manner to make sure the technology is reliable and safe. The companies also want to make sure that both the consumer and the regulators are comfortable with the idea of self-driving cars.

Nissan will be able to make a fully self-driving car by 2020, said Ghosn. But whether regulators will let you drive the car is a bigger question, he said.