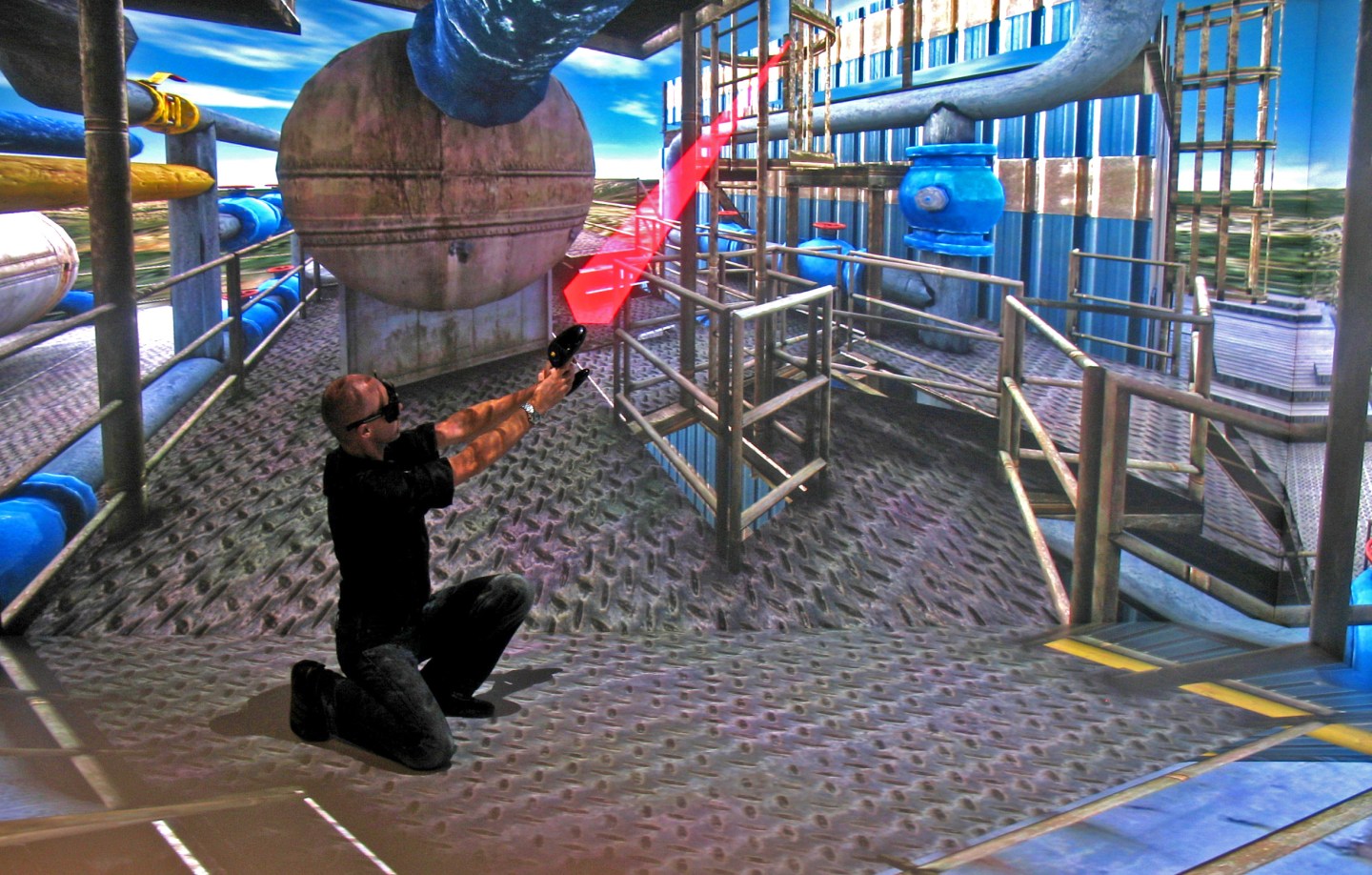 Dassault Systèmes has been working in virtual reality for 20 years. The company has specialized in Cave Automatic Virtual Environment (CAVE) systems, which are full-room spaces that bring virtual worlds to life via projectors and 3D glasses. For example, Disney Imagineering uses CAVE systems to build attractions. At CES, Dassault Systèmes is using the HTC Vive to demonstrate a more affordable alternative to enterprise businesses.

Dassault Systèmes began its “Never Blind in VR” project two years ago to solve the one problem that virtual reality headsets presented: Not being able to see others in a room. A CAVE system allows multiple users wearing 3D glasses to experience the 3D projection. But once a user puts on a virtual reality headset, they’re cut off from the real world and any social interaction.

The solution Nahon’s team came up with was to use the Microsoft (MSFT) Kinect camera, which was designed for video games, to scan the space where the user is from the outside. This allows the user to see both the virtual world and others in the room. Also, by implementing the HTC Vive, the user isn’t tethered to a sit-down experience and can walk around the room.

With the introduction of the Vive Pre at CES, which adds a camera to the front of the headset that allows users to see through to the real world, Nahon says they may incorporate that technology into their solution.

Dassault Systèmes works with clients from a dozen industries that use CAVE Systems, ranging from engineering and designing to sales and marketing to automotive, retail, and virtual training.

“Virtual reality is very important for training because companies like the oil industry have complex operations that they need to train employees about before going into the field,” Nahon says.

MORE: Here’s why NFL teams are training in virtual reality

Nahon believes the ability to pair virtual reality headsets with something like the Virtuix Omni treadmill will play a key role in the training sectors.

“Automation is important in the early learning stages because you need to go from one place to another, and physically moving is an important part of decision-making in the real world,” Nahon says.

At CES, Dassault Systèmes is using the Vive to showcase its 3DVIA HomeByMe interior design application, which was developed with Chinese retailer BDHome. Virtual reality allows customers to visualize and customize ideas for home decor or remodeling projects in 3D, bringing the showroom experience into their homes for the first time.

Nahon sees virtual reality helping retailers in other ways, as well. For example, customers could check out larger items like a washing machine from home and order directly from a store, which would allow retailers to offer more big box items without needing to worry about inventory.

Dassault Systèmes is also demonstrating its 3D Dream Sketcher experience, which allows consumers wearing a Vive to create anything they want in the virtual world and then share it through social media in the real world. Examples from CES can be found here, showing how the user is part of the shared experience.

Nahon believes these examples are just the beginning of how the consumer virtual reality products will influence companies who have been working within the medium for years.