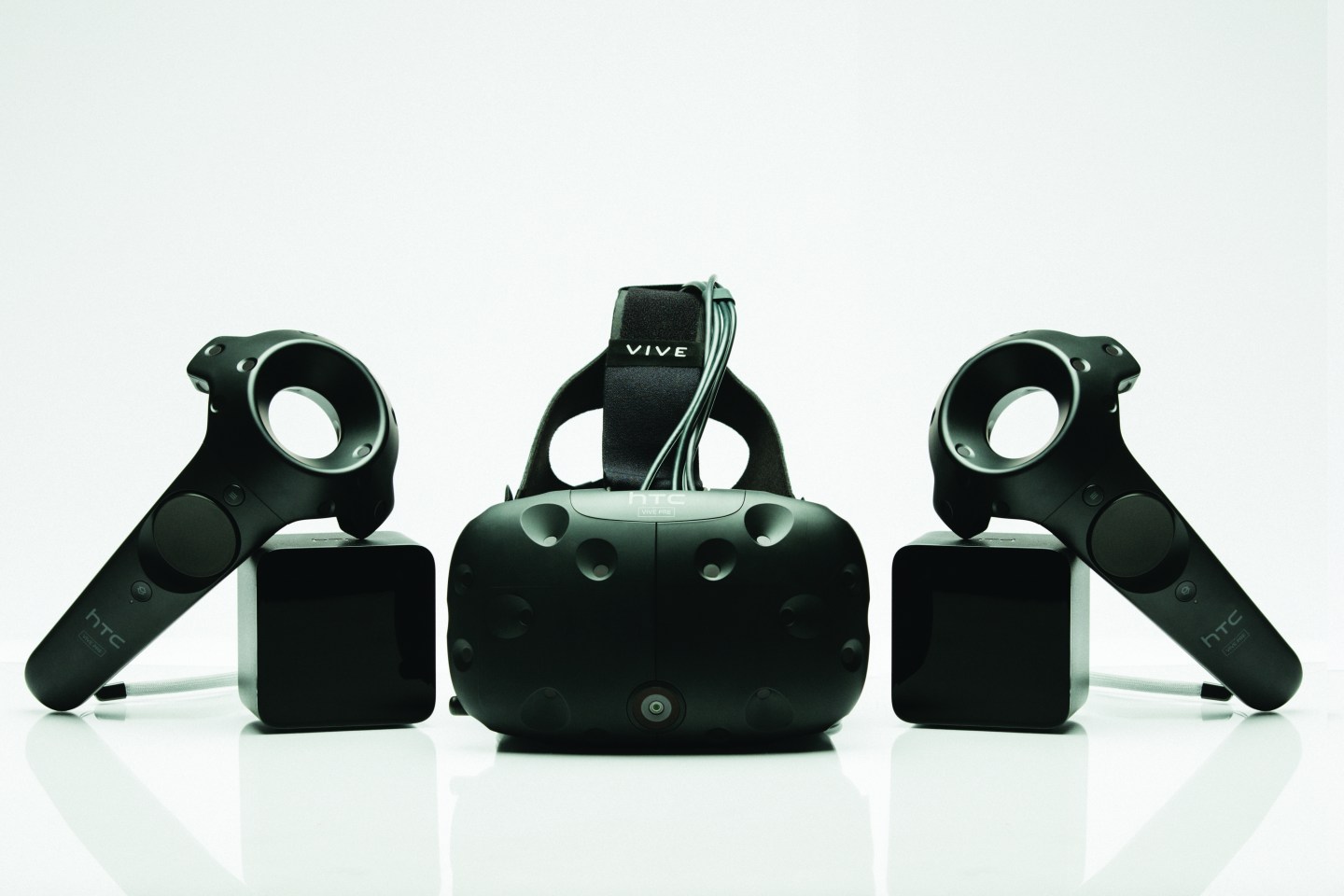 HTC is showing off a brand-new Vive Pre virtual reality system at CES 2016, but it’s only for developers. The company is giving away 7,000 of the new products to game makers and other creatives this month, according to Dan O’Brien, vice president of planning and product management for HTC Vive.

HTC (HTC) did not announce pricing or a firm release date for the HTC Vive Consumer Edition, which was previously delayed until April. All of the enhancements on the HTC Pre will ultimately end up in the consumer edition.

O’Brien says HTC has designed every piece of the HTC Pre from the ground up.

“The headset has brighter, crisper screens with Mura correction, which makes objects feel like they’re right in front of you,” O’Brien says. “It adds to the presence value.”

The headset is smaller and more comfortable than the Vive design, according to O’Brien. Interchangeable foam inserts and nose gaskets make it easier to adjust the headset to faces of any size or shape, including consumers wearing eyeglasses.

WATCH: Expect drones, all kinds of reality, and more drones at CES 2016:

New on the Vive Pre is the new front-facing camera, which is being used in two ways. As part of the “chaperone system,” the camera overlays real-world items like walls, chairs, and tables into the virtual world for a mixed reality experience to ensure users don’t walk into things as they’re playing games or exploring experiences.

This “pass-through camera” safety feature is customizable, as users can assign the dimensions of their play space when setting up the system. Unlike Facebook’s Oculus Rift, the HTC Vive has been designed to allow navigation through a real-world room while exploring virtual worlds. The new camera replaces the grid system that previously would interrupt a virtual reality experience to alert a user that a wall or other object was nearby.

O’Brien says users also can turn on the pass-through camera at any time during a session by pressing a button combination on the controller. This makes it easy for consumers to see and communicate with friends in the room, or find a chair for a sit-down virtual reality experience.

“We’re going to make the camera completely accessible to developers and let them iterate on the potential beyond what we’ve done,” O’Brien says.

Each Vive Pre system ships with two wireless hand controllers. These have been redesigned for a more ergonomic look and feel with textured buttons and side grip pads. O’Brian says HTC has also added a dual-stage trigger for smoother interactions with virtual objects and haptic feedback to complete the immersion. The controllers are powered by rechargeable lithium polymer batteries that last four hours.

“We thought about all the things necessary to have the best VR experience and decided it’s not a rotational or seated VR experience, but room-scale VR where you have the freedom to move around,” O’Brien says.

O’Brien says there are thousands of games in development for HTC Vive Pre. Several games will be on display at CES, including a demo of Starbreeze VR’s John Wick shooter, Vertigo Games’ zombie shooter Arizona Sunshine, Owlchemy’s Job Simulator, and Valve’s Portal and Shopkeeper demos. The Martian VR Experience from 20th Century Fox also will be on display.

O’Brien says the focus at CES is on the new hardware, while a separate content-focused event in Seattle in late January will showcase new games and entertainment content. Both HTC and partner Valve, which creates the SteamVR operating system that the Vive runs on, are based in Seattle.

HTC has worked with Valve to hand-pick the developers who receive the free developer kits, since O’Brien says Valve has long-standing relationships with the top game makers in the industry.

Also at CES this week, the Vive is featured in the Audi booth, showing how the technology can be integrated into a showroom experience. Dassault Systemes is showing a Vive painting and design experience at its booth. VirZoom is using the Vive in its virtual bike experience. 20th Century Fox is demonstrating The Martian Experience with the Vive. And Virtuix Omni is using four Vive headsets for a multiplayer eSports competition.

“Valve and HTC have a combined vision of this space, and while it’s going to explode with gaming and entertainment initially, which is where the best developers are, it will evolve,” O’Brien says. “A lot of developers are creating new tools for these other verticals like design, education, military, engineering, and medicine. Several are starting to evolve quickly, but in general, nongaming content will become a big part of the virtual reality ecosystem.”

O’Brien says a lot of partners are already thinking about the Vive within the enterprise space. One early example is a surgical theater, where doctors could walk through a brain before an operation to see it from every angle.

“If I’m a teacher, this changes everything,” O’Brien says. “Kids who do a VR experience around the same content as kids who read four pages of text end up testing higher and retaining the information longer.”

HTC will begin taking preorders for the Vive in late February.