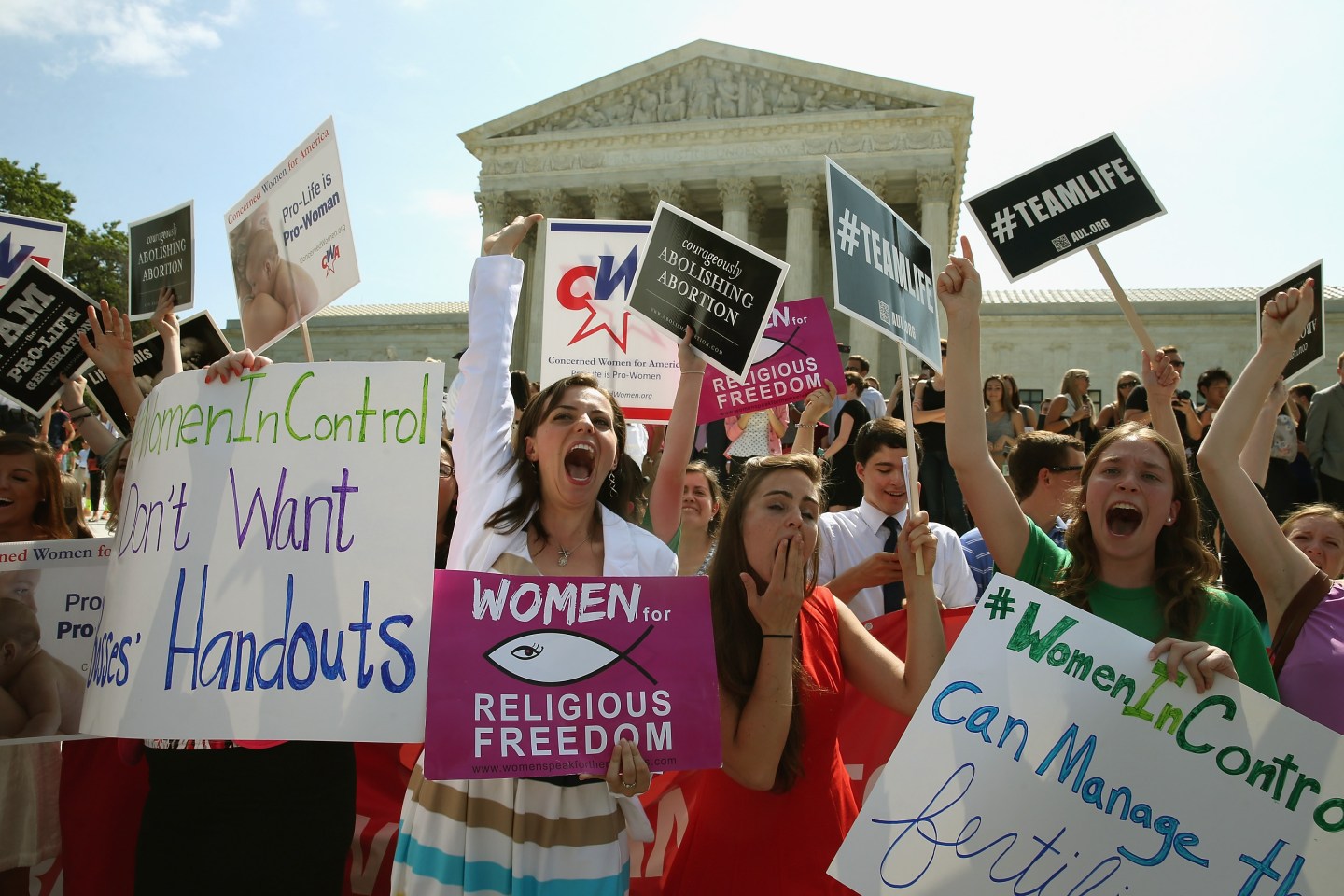 When the Supreme Court handed down the Hobby Lobby decision, allowing companies to deny women insurance coverage of certain contraceptives, it seemed like a blow for women’s rights.

But the amount of maneuvering by women in Washington before and after the decision shows women’s burgeoning power in the Capitol.

When Congress passed Obama’s healthcare reform in 2010, it allowed the Administration to decide whether employers would be required to provide free contraception to female employees under the new insurance plans available through the state health care exchanges.

Almost immediately, several religious groups and faith-based companies, including Hobby Lobby, a chain of craft stores, applied for exemptions from providing the “morning-after pill,” which interrupts a suspected pregnancy by preventing the fertilized egg from attaching to the uterine wall. Hard-core right-to-life advocates believe that life begins at the moment of conception, and that taking pills to interrupt even a potential pregnancy constitutes murder.

Catholic members of Obama’s Administration, such as chief of staff Bill Daley and Vice President Joe Biden, argued for a wide exemption that would allow any religious group or entity to opt out. Most of the women in the Administration argued for a narrow one, so that as many women as possible could have contraception covered.

The issue came up at one of the Cabinet women’s regular dinners, a tradition started by Health and Human Services Secretary Kathleen Sebelius and Homeland Security Secretary Janet Napolitano, who as the respective governors of Kansas and Arizona, had dined regularly with the female counterparts from other states. The women decided that they would lobby the President for a narrow exemption through their own channels, bringing it up at the end of unrelated meetings on the environment, economics, or foreign policy.

The strategy worked. After hearing this message from so many women in the Administration, President Obama gathered women from the Cabinet and the West Wing to weigh in. “There were people who were trying to advise the President about strategies that would have limited choices for a lot of women,” Sebelius said. “There was a pretty universal belief among the women in the Cabinet and senior White House advisors that was a big mistake.” Obama opted for a very narrow exemption.

A year later in March 2012, the Senate took up the matter. Before the vote, Senate Minority Leader Mitch McConnell lobbied his members to support a much broader exemption. Maine Sens. Olympia Snowe and Susan Collins, both pro-choice, objected to it, and McConnell threatened to take away future chairmanships if they voted against the measure.

The episode was so acrimonious that Snowe, who’d been in office 17 years and was weighing another term, abruptly announced she would be retiring. In an angry press conference, she lambasted the “atmosphere of polarization and ‘my way or the highway’ ideologies” in the Senate. The wider exemption failed 51-48, with both Republican women voting against it. When the GOP took back the Senate in 2015, Collins, the most senior Republican woman in the Senate, did not get a chairmanship.

It was the Supreme Court where women make up 33.3% of the bench, where the exemption was struck down in July 2014. Sen. Patty Murray, a Washington Democrat, told me that she purposefully went to hear the Supreme Court’s oral arguments on the Hobby Lobby case.

“I watched the two men lawyers make their cases and immediately the lawyer speaking from Hobby Lobby was interrupted by the women on that court asking the questions I would have asked. You know, ‘What does this mean?’ ‘How can an employer decide?’ It made a huge difference on that court because it was the women who asked questions,” Murray told me.

“But the decision still went their way,” I noted.

“I know,” Murray said. “Guess how many men were in that court?” she said with a wry smile. Murray is resolved to see a fourth woman added to the Supreme Court: in her mind, the work of balancing the bench is far from done.

The Hobby Lobby decision energized women’s groups to campaign to get more women appointed to the bench. Ultimately, the Obama Administration—again led by the women in the Cabinet and the West wing—rewrote the law to allow companies to opt out of insuring certain contraception; the federal government would instead extend that coverage.

As of the end of 2015, this language had been challenged and upheld in four federal appeals courts and looked likely to withstand a Supreme Court challenge should one emerge. Where there is a will, there is a way.

This is an excerpt from TIME Magazine correspondent Jay Newton-Small’s new book “Broad Influence: How Women Are Changing the Way America Works,” out January 5 and available here on Amazon. The book looks at the areas in the workforce where women are reaching critical mass—typically between 20-30 percent—and how they’re changing the way we govern, manage, adjudicate and command.