Coin Looks Beyond Smart Cards By Teaming With MasterCard 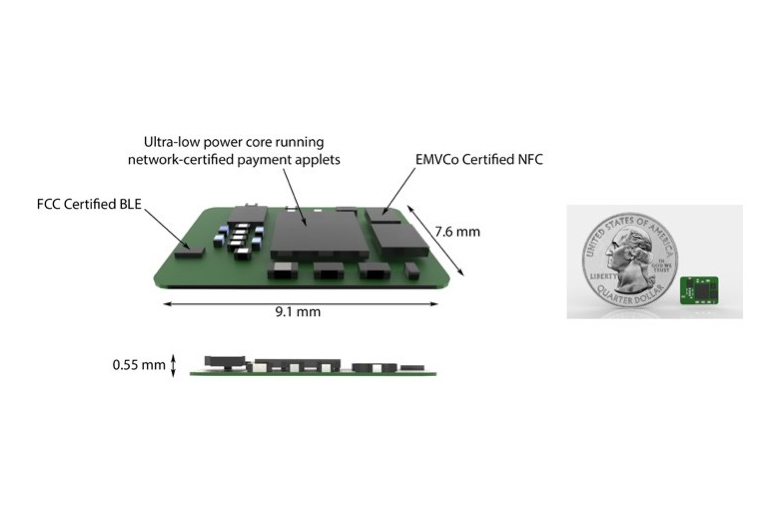 The future for Coin, a buzzy startup pushing a smart credit card that can store several cards simultaneously, is in finding another use for its technology, CEO Kanishk Parashar recently told Fortune.

On Wednesday the company pushed ahead with that idea by announcing a partnership with MasterCard (MA). The plan is to use Coin’s technology to make it easier for smaller companies building fitness trackers and other wearable devices to add payment services to their respective products.

For example, a person wearing a fitness band with Coin’s technology embedded in it could, in theory, pay for a meal at McDonald’s with a simple wave of his or her wrist in front of the payment terminal. No need to take out a credit card from a wallet or cash.

The technology repurposes a chip Coin designed and built for its smartcard. Other hardware makers that adopt the chip, which is just half a millimeter thick, can include mobile payments without sacrificing precious space and battery life.

Wearable companies Moov, Omate, and Atlas Wearables have said that they are working with MasterCard and Coin to bring mobile payments to their products in the future. Meanwhile, rival Apple (AAPL) has included its Apple Pay mobile payment service in its Watch while Samsung’s Gear S2 watch will feature its payment service, Samsung Pay, as part of future software update.

“Coin is really brining to life the idea of the simplicity, and the speed to market,” Sherri Haymand, senior vice president of digital payments at MasterCard, recently told Fortune when talking about the partnership. It is part of MasterCard’s push to add mobile payments to any and all devices.

“Coin is basically doing all the work by providing a hardware and software [option] that device manufacturers can use to easily connect with MasterCard,” she said.

The partnership between Coin and MasterCard isn’t exclusive, however, leaving the possibility that users may one day may also be able to pay with cards from providers like Visa and American Express when Coin-integrated products begin shipping in the second half of this year.

Coin faltered with the launch of its first generation card two years ago, missing shipment deadlines and shipping a product that wasn’t reliable. However, the second version of the card introduced in late 2015 was considered an improvement. And it just so happens the technology inside that card is what Coin is hoping to use to power wearable payments in the future.

When asked what the shift in focus meant for the future of Coin’s all-in-one credit card, Parashar wouldn’t provide any details. “We’re expanding our capabilities, because we see a bigger need than what we built” Parashar explained. But he did acknowledge that his company is currently discussing its future strategy, including “What Coin is?,” though he didn’t elaborate.