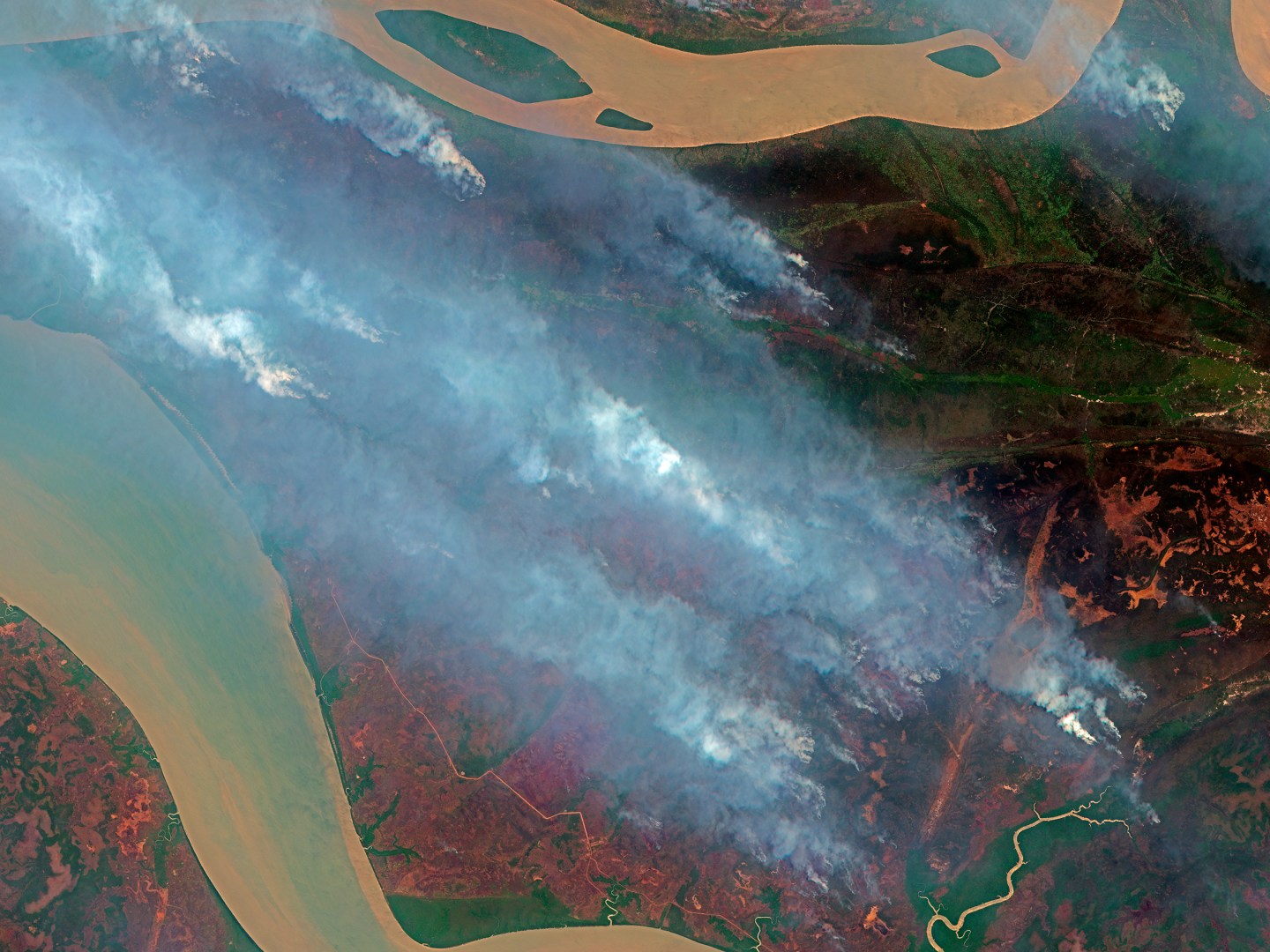 Not far from the government laboratory in New Mexico best known as the birthplace of the atomic bomb, a startup is applying the same lab’s supercomputing technique toward a different goal: predicting crop production—from space. Los Alamos–based Descartes Labs is just one of many new ventures searching for macroeconomic trends in satellite images—a trove of big data that’s getting exponentially bigger, thanks to the growing number of satellites that companies are hurling past the stratosphere.

In 2016, 92 commercial Earth-observation satellites will be put into orbit—that’s more than 10 times the number in 2013, says research firm Tauri Group. Most are about the size of a loaf of bread and made by Planet Labs, which says that this year it will be able to take a picture of every inch of land on Earth, every day.

The images can help predict crop yields with remarkable accuracy. Here, land in Sri Lanka as photographed by a satellite. The red areas have been identified by algorithms as agricultural.Courtesy of Orbital Insight/Satellite imagery: DigitalGlobe

What can you do with an astronaut’s view of the planet? Plenty. While Earth observation is still a small slice of the $123 billion satellite services industry, it has been growing fast: Its $1.6 billion in sales in 2014 were up 60% from five years earlier. Descartes, which raised $5 million in November, says it can predict crop yields partway through the year with 99% accuracy—a level of precision the USDA can’t match until after the season is actually over. Another company, Orbital Insight, which recently raised $8.7 million from Sequoia Capital, among others, tracks construction in China based on shadows cast by buildings. It also zeroes in on the parking lots of more than 50 U.S. retailers, providing intel about store traffic to hedge funds and other investors. It was among the first to notice a drop-off in visitors to Chipotle (CMG) following the burrito chain’s E. coli scare.

The shadows cast by buildings (shown in green) can give an early sense of construction activity and commerce.Courtesy of Orbital Insight/Satellite imagery: DigitalGlobe

“I’m going to characterize this as really a revolution in computer vision,” says Descartes CTO Steven Brumby. “In the next year there’s going to be the first effectively real-time view of the whole world.”

The data has applications far beyond finance: Orbital Insight, which counts government agencies as well as large corporations among its clients, is also working with the World Bank to try to use satellite imagery to track poverty levels. And Descartes is developing a method to monitor climate change and could eventually track countries’ compliance with the recent Paris accord.

A version of this article appears in the January 1, 2016 issue of Fortune with the headline “Moving Markets From 400 Miles.”