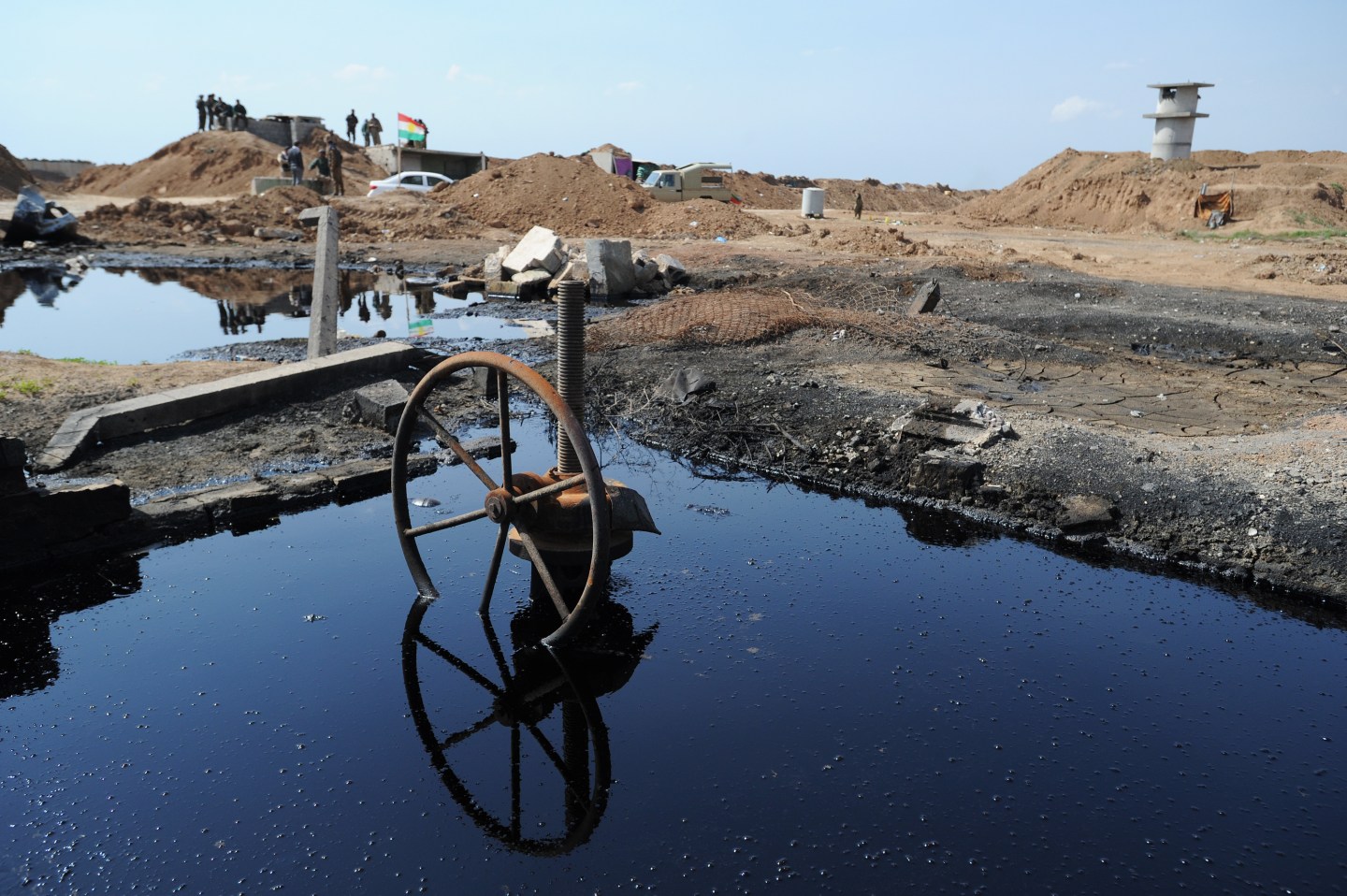 KIRKUK, IRAQ - MARCH 13: A peshmerga checkpoint is reflected in pools of oil with damaged oil pipeline infrastructure, as Iraqi Kurdish forces push the frontline forward against ISIS forces in the Tal al-Ward district 20 miles southwest of Kirkuk, Iraq, on March 13, 2015. These peshmerga units of the Patriotic Union of Kurdistan (PUK) faction have made significant gains against villages held by ISIS, in concert with an Iraqi government and Shiite militia attack further south to free Tikrit from ISIS control, with a joint aim of squeezing the jihadist militants from Iraq. Since ISIS swept from Syria in June, 2014, Kurdish forces in northern Iraq have expanded their control over oil-rich territories disputed with Baghdad such as Kirkuk and its oil and gas facilities. (Photo by Scott Peterson/Getty Images)
Scott Peterson — Getty Images

After the terrorist attacks in Paris and San Bernardino, the presidential race has shifted its focus, understandably, from the economy to terrorism and international relations.

But given how the the geopolitical dynamics in the Middle East are so dependent on the business of oil extraction, economics and terrorism, including the rise of ISIS, may be more connected than they may seem at first blush.

Indeed, during last week’s undercard Republican debate, former Arkansas Governor Mike Huckabee argued that a key to defeating American adversaries in the Middle East is the energy extraction industry. “We ought to be challenging not only Russia but the Iranians and the Saudis on the point of energy,” he said. Huckabee continued:

There’s some understandable logic here. If America’s energy industry is able to take global market share, that will chip away at the main source of power for countries like Iran and Russia. But upon closer examination, the argument reveals itself as specious. In fact, the huge increase in American supply as the result of advances in fracking technology has been one of the driving forces behind the sudden fall in oil prices that began in late 2014. And it’s hard to argue, given ISIS, that the Middle East has become any safer for the U.S.

In fact, the decline in the price of oil and the rise of ISIS correlate strongly. In early 2014, ISIS began capturing major cities in Syria and Iraq at the same time that global stockpiles of oil began increasing unsustainably. And though the rise of ISIS and general instability in the Middle East is the result of multifarious, complex forces, the desire to exert power through controlling the flow of oil from that region is undoubtedly a major factor.

One could even argue that the the United States success in nearly doubling its production of oil to 9.3 million barrels per day in 2015 has helped to exacerbate the very same tensions that have given ISIS an opportunity to gain a foothold in the region.

Dr. Mohammed Nuruzzaman, Associate Professor of International Relations at the Gulf University for Science and Thechology and Quwait, has studied the role of Middle East politics in the rise of ISIS. He argues that countries like Qatar initially pounced on the Arab Spring movement in part as a means to topple leaders like Libya’s Muammar Gaddafi with the hope of installing leaders more congenial to its own economic interests. A post-Gaddafi Libya opened the door for the Qatari oil and gas industries to take a larger role in developing that countries resources.

As the Arab Spring spread to Syria, Qatar and Saudi Arabia saw the unrest as an opportunity to unseat Bashar al-Assad, an Alowite Muslim leading a country that is majority Sunni (like Qatar and Saudi Arabia), while at the same time undercutting the economic interests of rival energy exporters Iran and Russia, which have long backed the Assad regime. As Mitchell Orenstein and George Romer point out in Foreign Affairs, the major belligerents in the Syrian civil war—Iran, Saudi Arabia, Qatar, Russia, and the United States—are all energy exporters concerned with the future of energy extraction and how it will reach an oil-and-gas-hungry European market. They describe how Qatar has long searched for an inexpensive way to ship its natural gas to Europe, a goal that puts it in direct competition with Russia:

In 2009, Qatar proposed to build a pipeline to send its gas northwest via Saudi Arabia, Jordan, and Syria to Turkey, an investment of billions of dollars up front that would reduce transportation costs over the long term. However, Syrian President Bashar al Assad refused to sign the plan; Russia, which did not want to see its position in European gas markets undermined, put him under intense pressure not to.

At the same time, Iran, sensing an opportunity, and lacking export infrastructure for its own massive gas reserves, proposed an alternative Iran-Iraq-Syria pipeline that would pump Iranian gas from the same field out via Syrian ports such as Latakia and under the Mediterranean. Moscow apparently blessed this project, possibly believing that Russia would have an easier time dealing with Iran (unlike Qatar, not home to a U.S. base) to control gas imports to Europe from Iran, the Caspian Sea region, and Central Asia. The announcement of the Iran-Iraq-Syria pipeline deal came in 2011. The parties signed the documents in July 2012. Construction was slated to be finished in 2016, but the Arab Spring and ensuing chaos in Syria interfered.

When one understands the stakes of the game being played—the power that results from supplying natural gas to Europe—it makes more sense why a recession-racked Russia, already expending resources on the conflict in the Ukraine—would decide to begin fighting a second front in the Middle East. It also makes sense why countries like Qatar and Saudi Arabia would risk stoking the flames of Sunni extremism in their support of anti-Assad movements.

And these dynamics show why the strength of the U.S. energy exploration industry can actually cause headaches for the United States abroad, as countries that could once count on sky-high oil and gas prices to underwrite their power scramble for market share in a world of cheap energy.