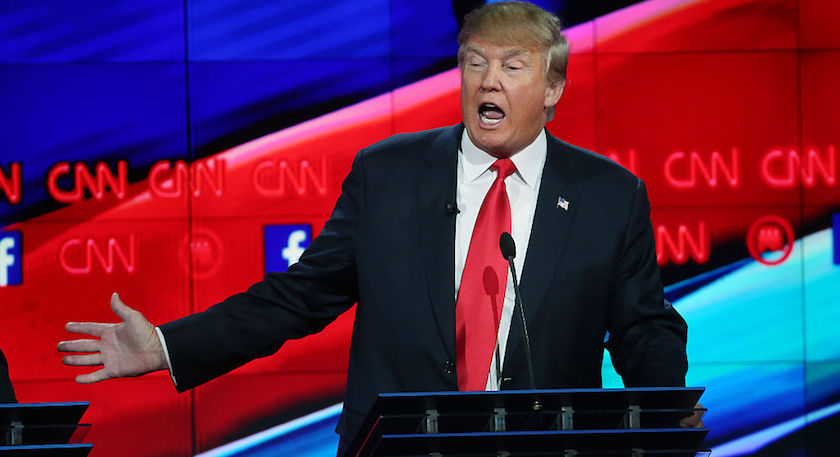 The Trump boom continues to grow, and the political pros who have missed it from day one are scrambling for explanations. Hillary Clinton, Bernie Sanders, and Martin O’Malley made sure to bash him during their debate on ABC Saturday night, and CBS News headlined, “Donald Trump dominates Democratic debate discussion on Facebook.” NBC’s Meet the Press booked him as a guaranteed high-audience guest Sunday morning. The latest polls show him with his biggest numbers yet. Absolutely no one foresaw this (least of all himself, I strongly suspect). What’s going on?

Just to put my cards on the table: I don’t think Trump should be President (or v.p. or anywhere near any position of government authority), and I’m confident he will not be. But I do think his rise is pretty easy to explain. Like it or not, he’s doing four things that effective leaders do, and doing them extremely well.

He gives voice to the feelings of many people, who become his followers. A recent piece in the Indianapolis Star based on interviews with Trump supporters notes that even though they’re starkly unlike the Ivy League billionaire, “when Donald Trump opens his mouth, they say they hear themselves.” Successful leaders have always done this. Most people yearn for someone who commands a larger stage to articulate what they’re feeling. When Trump calls for a ban on Muslims entering the U.S., and his numbers go up, that’s what he’s doing.

He shows fearlessness. For centuries, military leaders literally led armies into battle, inspiring the troops with their courage. Leaders must never show fear. When Republicans, Democrats, and commentators from left to right condemned Trump’s proposed Muslim ban, he was asked if he stood by his statement. Yes, he insisted. Conventional analysts saw this as doom. But his supporters saw it as their man standing up to the authorities who are trying to bring him down.

He shows decisiveness. Aspiring leaders should never forget that people want to be led. They are remarkably willing to support someone who makes firm decisions, and they can’t stand equivocation when they want action. Trump is never mealy-mouthed, even when he’s incoherent. When asked in last week’s debate for his views on America’s nuclear triad, his answer left no doubt that he hadn’t the remotest idea what the nuclear triad is – but he sure sounded firm and decisive, just as he does when he says Clinton “lies like crazy about everything” (as he did on Sunday) or Jeb Bush is “dumb as a rock” (as he did in a recent tweet).

Trump hasn’t discovered anything new about leadership. On the contrary, he has discovered what’s old. The Republican field will be winnowed, and I suspect the content of Trump’s positions (and the lack of it) will eventually lead voters elsewhere. But whoever wants to beat him had better learn from him.