Why Apple’s Tim Cook Lost His Cool on ’60 Minutes’ 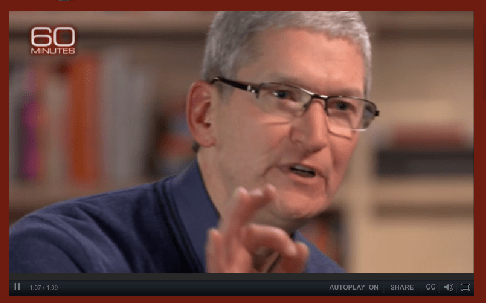 “Total political crap” is the kind of language we expect from Donald Trump, not Tim Cook.

Yet there’s the CEO of Apple (AAPL) in a video promo for Sunday’s 60 Minutes losing his cool under the baggy-eyed glare of CBS’s Charlie Rose.

What set off the usually unflappable Cook was the public-relations albatross that has hung on his—and Apple’s–neck for nearly four years, ever since a Pulitzer Prize-winning story in the New York Times painted the company as the pioneer of modern multinational tax avoidance.

The story prompted an investigation by a Senate subcommittee and a 2013 televised hearing in which Cook sat through two hours of grandstanding and name-calling by the politicians responsible for the rats nest that is the U.S. tax code.

“This is a tax code, Charlie, that was made for the industrial age, not the digital age,” Cook tells Rose with some heat. “It’s backwards. It’s awful for America. It should have been fixed many years ago. It’s past time to get it done.”

Rose does a good job airing the issues. When Cook said that Apple probably paid more U.S. taxes than any other company, Rose countered that’s only fair, given how much money Apple makes.

He got Cook to say that the real reason Apple has $181 billion parked overseas—more than any other U.S. company—is that he doesn’t want to pay 40% in taxes it would cost him to bring it back.

Then Rose stepped on what is, for Cook, the third rail of tax minimization, quoting from the dreaded Senate subcommittee’s 2013 report and citing a dollar figure Cook had taken pains in his testimony to refute.

“Apple is engaged in a sophisticated scheme to pay little or no taxes on $74 billion of revenue held overseas,” Rose read from his notes.

“That is total political crap,” Cook shot back, handing 60 Minutes a made-for-primetime soundbite. “Apple pays every tax dollar we owe.”