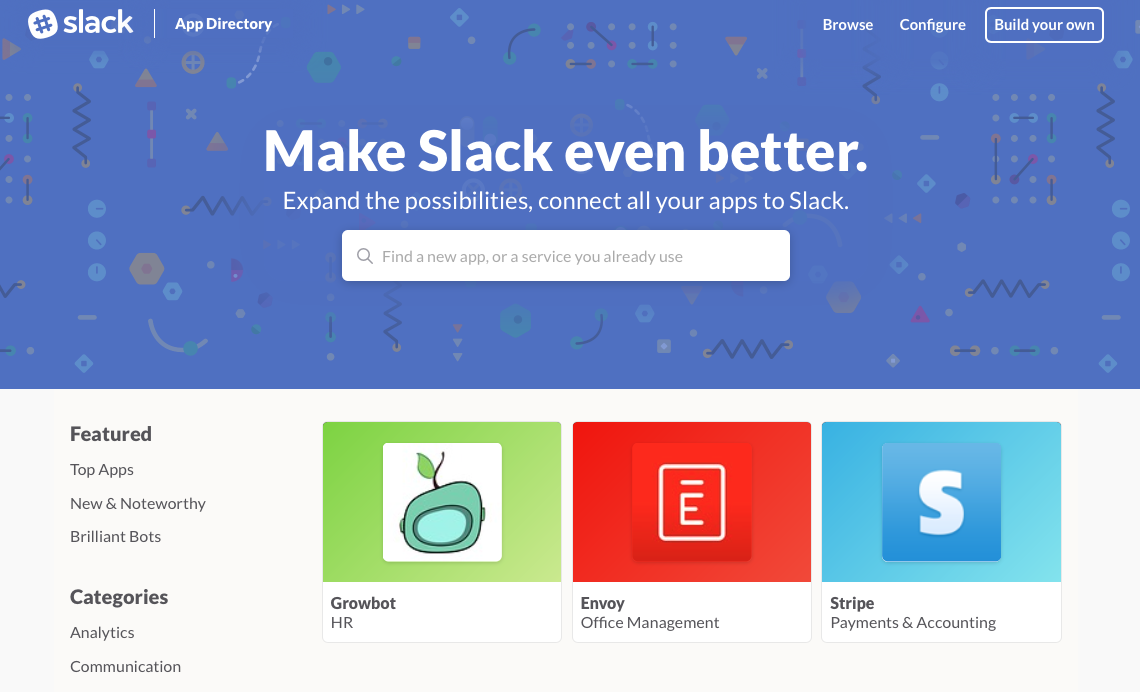 Over its relatively short lifetime, Slack hasn’t exactly been at a loss for venture funding. Now, the well-backed startup is returning the favor.

The idea is to turn Slack into a “command center” that connects with other cloud business software. “We want to help more developers make a bet on the Slack platform,” said April Underwood, a former Twitter executive who joined Slack in June to craft its partnership strategy. “We want them to have access to the capital they need.”

Since Slack’s launch in early 2013, the company has raised more than $320 million in funding—its $160 million round in April boosted the San Francisco company’s private valuation to nearly $3 billion. The workplace messaging software has amassed 2 million daily active users since the service officially launched in February 2014—that’s almost double the tally from six months ago. And many Slack users stay connected to the service an average of 10 hours daily, Underwood said.

Central to Slack’s new initiative is an application programming interface (API) that allows developers to connect the messaging service with their own applications. At last count, there were already more than 150 “approved” applications connected with Slack, including well-known services such as Twitter (TWTR), Dropbox, Google (GOOG), and Uber.

The Twitter extension, for example, pipes updates from the social media network into a Slack “channel” so that marketing teams can keep tabs on complaints or comments and discuss them. The Uber integration, meanwhile, allows someone to book a ride using simple commands sent as Slack messages.

But the main focus of the new fund is to provide relatively unknown companies with early-stage infusions. “Developers are already taking Slack into a number of interesting verticals and business functions,” said Accel general partner Andrew Braccia. “We think Slack, like [Apple] iOS and Android, will be a rich platform on which applications can be created and monetized.”

One example of a partner that could benefit from the fund is Envoy, a reception-desk application that runs on tablet computers. With just $15 million in funding, the two-year-old company connects with Slack to use the service as a notification system to message employees when visitors arrive at a facility. The fund is designed to make integrations like this easier for small companies and startups to prioritize.

Slack’s new fund has already made several investments. The company didn’t disclose any company names, but it plans to list certain “Slack-ready” applications in a new App Directory after reviewing them. That approach is similar to the Salesforce App Exchange or Google’s app marketplace.

Can Slack succeed in its mission to dominate workplace collaboration? The company’s viral momentum remains one of its key competitive advantages, but it faces pretty stiff competition. There are dozens of other companies angling for a piece of the market, ranging from Atlassian (TEAM) , which made its highly successful IPO debut last week, to Microsoft (MSFT), which is betting big on its new Groups feature in Office 2016 to keep Slack in check.

Slack CEO Stewart Butterfield insists he isn’t out to get email. See for yourself in this Fortune video: