Addicts Have A New App to Help Them Stay Sober 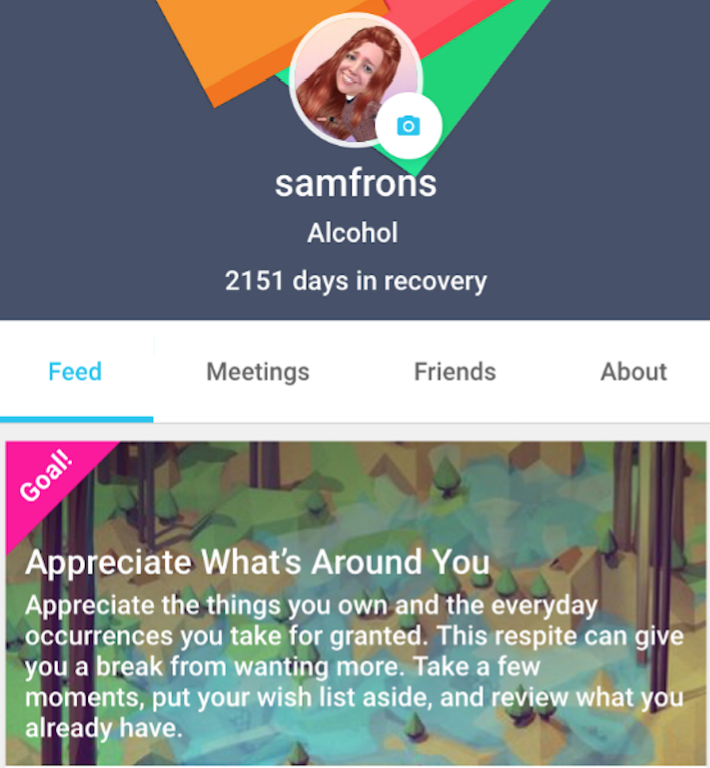 Sam Frons isn’t shy about discussing her recovery from alcoholism.

“Hi, I’m Sam, and I’m an addict” is a fairly standard opener for her during presentations at work.

Frons is CEO of a new app set to debut this month for addicts. Unconvinced about Alcoholics Anonymous, she built the app she wanted for her own recovery.

Frons was three years into her own recovery before she stepped foot in her first A.A. meeting. Frons says she was “really adamant” about not going. She longed for the peer support of meetings, but didn’t like the rigidity of the 12-steps and the faith in a “higher power” the group espoused.

Frons is not the only skeptic of the 80-year-old program. Experts disagree about its effectiveness, with some of them saying the failure rate is as high as 90%. Most agree the 12-step program is not one-size-fits-all.

A spokesman for Alcoholics Anonymous’ U.S. and Canada office says the group did look into developing its own app. But for now, it doesn’t have one.

Frons decided treatment needed a new tool, something that would help her get to those meetings and find peers, without the mold of A.A. founders Dr. Bob and Bill W. It’s called Addicaid, a kind of Fitbit-meets-Facebook for about 20 different kinds of addicts including alcoholics, gamblers, overeaters, codependents, and sex addicts. It started out as a simple tool for finding meetings, but it has grown into a service that includes chat rooms and daily self check-ins.

Similar smartphone apps for addiction have performed well. Andrew Isham, who helped develop A-CHESS at the University of Wisconsin, said the app reduced risky drinking days by half in clinical trials. Today, about 15,000 patients across the country use the service, which is paid for by insurance. (A standalone version is expected to be available in app stores sometime in 2016.) But Isham says consumers looking for their own apps might have a hard time picking one that works and that includes proven techniques in anti-addiction therapies.

“You pretty much have to be an academic,” Isham says. “I don’t envy someone who’s looking for something out there.”

Next year, Frons plans to introduce a premium version of Addicaid that will bring addiction counselors and coaches into the app. It will also include more Cognitive Behavioral Therapies, which are exercises to help people think about the consequences of continuing to use.

The National Center on Addiction and Substance abuse reports that one in seven Americans struggle with substance abuse. Frons hopes to make more treatments stick by digitally exporting the one part of the 12-step program that helped her—supportive peers—to a smartphone.

Watch how technology is transforming healthcare: