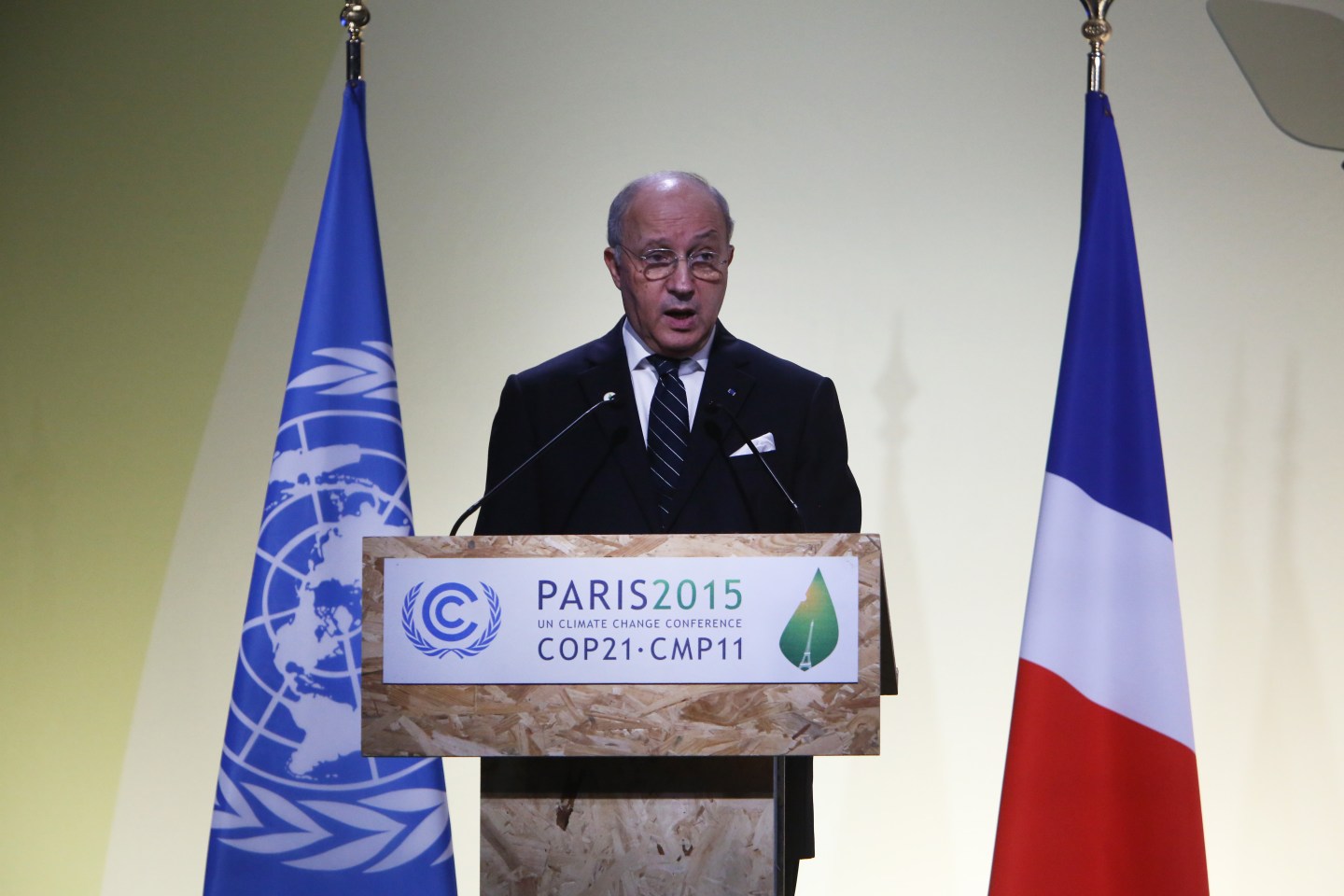 PARIS, FRANCE - NOVEMBER 30: French foreign affairs minister and COP21 President Laurent Fabius during the opening of the 21st session of the conference COP21 on climate change on November 30, 2015 in Paris, France. More than 150 world leaders are meeting for the 21st Session of the Conference of the Parties to the United Nations Framework Convention on Climate Change. (Photo by Patrick Aventurier/Getty Images)
Photograph by Patrick Aventurier—Getty Images

Leaders at a major climate change conference in Paris released what they called the “final draft” of an agreement to address global warming Saturday after an all-night negotiating session.

French Foreign Minister Laurent Fabius, who is heading the United Nations conference, said the agreement resolved points of contention that had taken negotiations into overtime and called the agreement “the best possible text.” Negotiators will meet later Saturday afternoon to respond to the text and potentially consider its adoption.

“In this room you are going to be deciding on an historic agreement,” Fabius told delegates from the nearly 200 nations gather in Paris. “The world is holding its breath. It counts on all of us.”

The deal, which would be known as the Paris Agreement if passed, would represent remarkable compromise after years of negotiations in which developing countries wrangled with their developed counterparts and failed to come to agreement on several key occasions. Supporters say the agreement would help define the energy landscape for the remainder of the century and signal to markets the beginning of the end of more than one hundred years of dependence on fossil fuels for economic growth

Observers had feared that a negotiated text could result in a lowest common denominator to meet the differing needs of all the parties present in Paris. But climate policy experts appeared largely satisfied with the draft presented Saturday.

A strong long-term goal to reduce carbon emissions, provisions explaining how developed countries would receive financing for their efforts to adapt to climate change, and a transparency system to ensure that countries meet their promises to reduce greenhouse gas emissions were among those key goals. The draft text released Saturday included provisions addressing all those key points.

The agreement includes a long-term goal of holding global temperature rise “well below” 2°C (3.6°F) by 2100 and recognizes a maximum temperature rise of below 1.5°C (2.7°F) as an ideal goal. The 2°C target is the level of ambition needed to avoid the most devastating effects of climate change, according to climate scientists, but it would not be enough to save many of the world’s most vulnerable countries. Those countries, largely small Pacific Island nations, launched a large-scale push for the 1.5°C target to be included in the agreement. The draft text also calls for “global peaking of greenhouse gas emissions as soon as possible” and for the continued reduction of greenhouse gas emissions in the second half of this century as science allows.

Measures to finance efforts to fight climate change in the developing world had also been a key sticking point in negations. The agreement renews a commitment by developed countries to send $100 billion a year beginning in 2020 to developing countries to support their efforts to fight climate change. The agreement describes the sum as a “floor,” which may presumably be increased.

The agreement also requires all participant countries to assess their efforts to reduce carbon emissions every five years and expand upon those efforts as they are capable. Some countries had expressed reluctance to promise to increase their goals so far in advance without knowing their economic situation.

The responsibilities of developed countries are distinguished from those of their developing counterparts throughout the text, a key demand of large developing countries like India and China that worried the agreement might require them to take actions that would slow their economic growth.

“It has all the core elements that the environmental community wanted,” said John Coequyt, the Sierra Club’s director of federal and international climate campaigns.