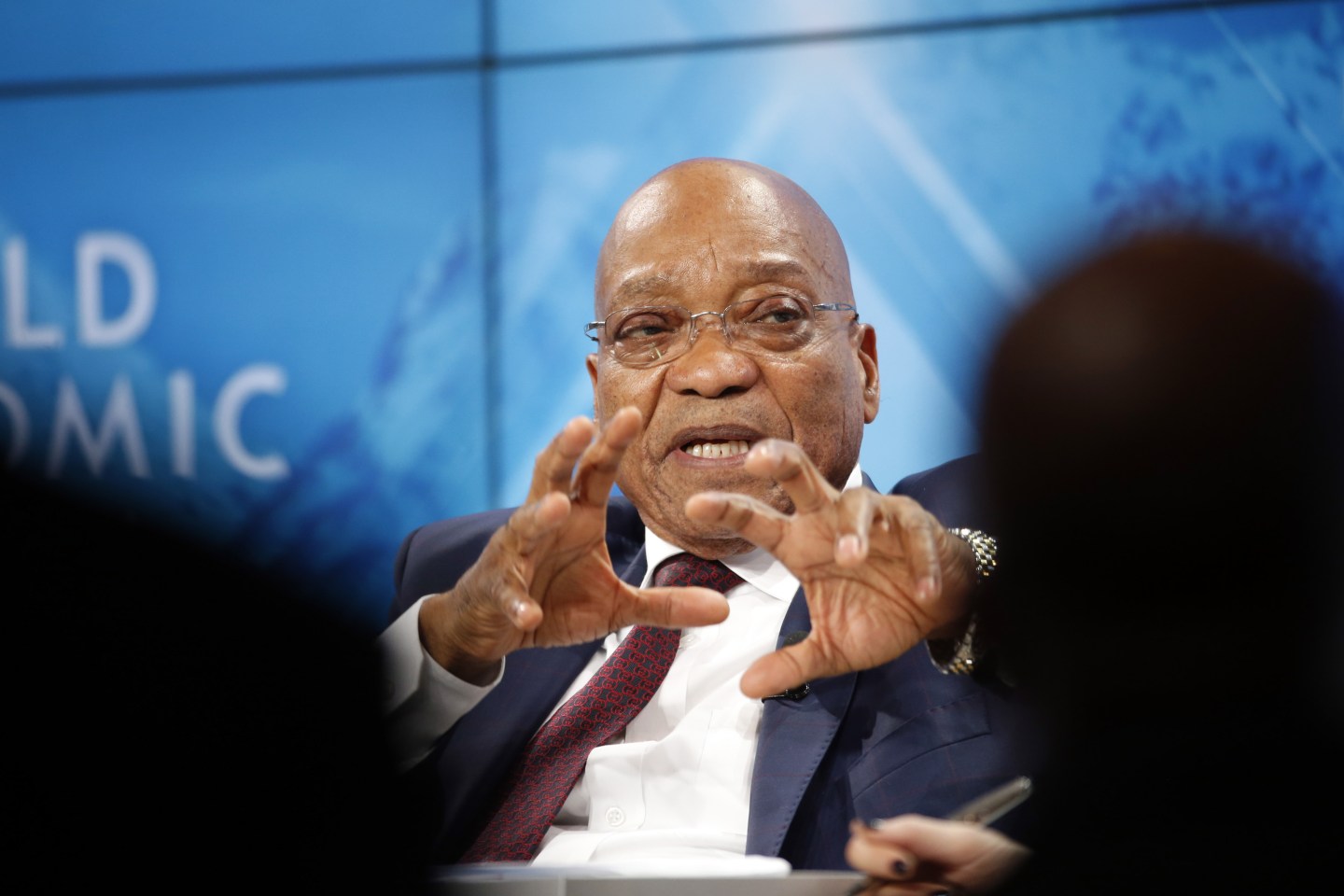 Jacob Zuma, president of South Africa, gestures as he speaks during a session on the opening day of the World Economic Forum (WEF) in Davos, Switzerland, on Wednesday, Jan. 21, 2015. World leaders, influential executives, bankers and policy makers attend the 45th annual meeting of the World Economic Forum in Davos from Jan. 21-24. Photographer: Jason Alden/Bloomberg via Getty Images
Photograph by Jason Alden — Bloomberg via Getty Images

South African President Jacob Zuma’s sacking of his respected finance minister in favor of a relative unknown has shocked investors and emboldened critics who say the 73-year-old is driving the economy to ruin.

Even some supporters of the African National Congress (ANC), Nelson Mandela’s erstwhile liberation movement that has ruled since the end of apartheid in 1994, expressed dismay about Wednesday’s appointment of a Zuma loyalist to the crucial post.

Zuma gave no details as to why he had dismissed Nhlanhla Nene, who has overseen the Treasury for just under two years, other than to say he had “done well…during a difficult economic climate.”

Markets reacted unambiguously, with the rand plunging five percent against the dollar to record lows late on Wednesday. After a modest recovery, the currency slipped about one percent on Thursday.

Local media speculated this week that Nene might be on the chopping block after he rebuked Dudu Myeni, the chairwoman of state-owned South African Airways and a close ally of Zuma, for mismanaging a 1 billion rand ($67 million) deal with Airbus.

The main opposition party went on the attack. “It is clear that if you stand up to Zuma, you don’t stick around,” Mmusi Maimane, leader of the Democratic Alliance, told Reuters. “Zuma has reached new heights as a leader who puts himself ahead of his country and the economy.”

Zuma’s office did not respond immediately to Reuters requests for comment. The ANC said in a statement it “notes and respects” the president’s decision.

The sacking and the financial fallout hit a raw nerve with some ordinary South Africans. “With the rand getting battered like this, firing Nene is not the right move,” said Dominic Ratau, a 74-year-old pensioner and lifelong ANC loyalist, expressing his dissatisfaction with Zuma.

“I’ve been an ANC supporter because of the older generation who were running the party. But this guy is leading the country to disaster. He’s allowed too much corruption.”

Nene’s reluctance to rubber-stamp an ambitious plan to build a number of nuclear power stations to ease severe electricity shortages, a project that might cost as much as $100 billion, is also seen as contributing to his downfall.

He is replaced by little-known ANC lawmaker David van Rooyen, a former provincial mayor who serves on parliament’s finance committee. He did not respond to phone calls for comment.

Many economists have questioned van Rooyen’s ability to steady an economy being hammered by the collapse in prices of South Africa’s commodity exports that range from gold to coal, and raised concerns that public spending could spiral out of control.

A Reuters poll on Wednesday showed analysts expect the economy to grow just 1.4 percent this year and 1.6 percent next, 0.1 percentage points lower than last month’s forecasts.

Nene’s removal has raised speculation about more casualties within Zuma’s team, after the axing in September of mining minister Ngoako Ramatlhodi, who investors said had done a decent job in a tough but crucial portfolio.

South Africa is gearing up for important local elections next year where the ANC is expected to be run close by the Democratic Alliance in urban areas, including the economic hub of Johannesburg. The countryside remains an ANC stronghold.

Significant erosion of ANC control in metropolitan powerbases could strengthen Zuma’s opponents, especially if South Africans blame him for the floundering economy.

“Zuma’s power is becoming more brittle and his lines of support stretched thinner and thinner,” said political analyst Nic Borain. “He is engaging in actions that parts of his party find repulsive and there is a point beyond which a system under stress can quickly unravel as the connections snap.”

A #ZumaMustFall Twitter (TWTR) campaign kicked off within hours of Zuma’s announcement, echoing one earlier this year calling for the removal of colonial-era statues.

Zuma, a polygamous Zulu traditionalist with little formal schooling, has been beset by scandal throughout his career. In 2005 he was charged with raping a woman he knew to HIV-positive, but was found not guilty when the court ruled the sex was consensual.

Last year, the Public Protector, the top anti-corruption watchdog, ruled that he had “benefited unduly” from a 246 million rand state-funded security upgrade to his private home that included a swimming pool and amphitheater.

Despite this, he has maintained his authority and standing in the ANC. His presidential term ends in 2019. Were he to be forced out early, his ex-wife and African Union head Nkosazana Dlamini-Zuma, and deputy president Cyril Ramaphosa, are the front-runners to succeed him.