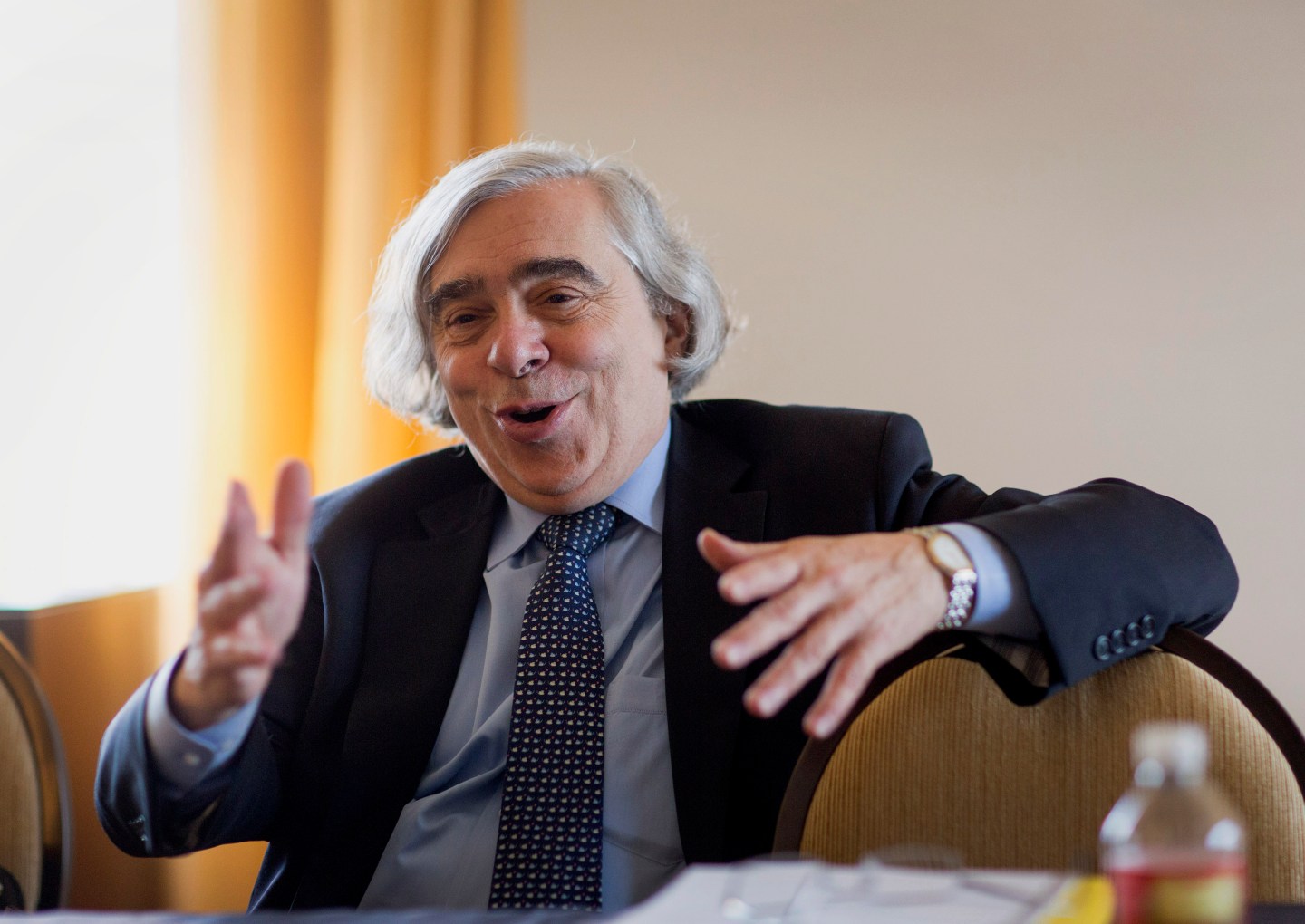 Ernest Moniz, U.S. energy secretary, speaks during an interview at the 2014 IHS CERAWeek conference in Houston, Texas, U.S., on Wednesday, March 5, 2014. IHS CERAWeek is a gathering of senior energy decision-makers from around the world to focus on the accelerating pace of change in energy markets, technologies, geopolitics, and the emerging playing field. Photographer: F. Carter Smith/Bloomberg via Getty Images
Photograph by F. Carter Smith — Bloomberg via Getty Images

At the tail end of the U.N.’s mammoth climate-change negotiations outside Paris, U.S. Energy Secretary Ernest Moniz told Fortune the 11-day talks had already produced “substantial success” and that the conference known as COP 21 would prove a turning point in tackling global warming.

Secretary Moniz, who is a nuclear physicist, also believes the administration could move ahead without Congress, despite its many critics. The Republican-controlled U.S. Senate has made it clear they will not ratify a binding treaty on climate change; so far, the U.S. has committed itself to reducing carbon emissions by about 26% by 2025.

On Wednesday, Secretary of State John Kerry announced the U.S. would double its grants to poor countries to work against climate change, from the current $430 a year to $860 a year. Still, that’s a fraction of the billions countries say they need to move away from their dependence on fossil fuels. The overall aim of COP 21 is to cap global warming at a maximum of 2 degrees Celsius warmer than it was before the Industrial Revolution 150 years ago, a level that scientists believe is the outer limit of what the planet can reasonably manage.

Kerry’s announcement was designed to mollify the deep divisions among delegates: Leaders of poor countries—most vocally Indian Prime Minister Narendra Modi—have said repeatedly that rich countries bear the blame for 150 years of polluting the planet, and therefore should shoulder the financial responsibility for solving the problem. The U.S.’s new funding “comes at a key point in the Paris climate negotiations,” says Alden Meyer, director of strategy and policy at the Union of Concerned Scientists. “The prize of an ambitious, comprehensive, and effective long-term climate agreement is within our grasp, if compromises can be found on the remaining crunch issues.”

Those ‘crunch issues’ include the unresolved differences evident Wednesday when the U.N. published its 29-page draft agreement, a prelude to the final one that 195 countries are expected to sign on Friday. Racing against the clock, activists gathered outside the closed-door negotiations. “Don’t compromise our future,” said one sign, as dozens of activists staged a protest sit-in the conference center on the edge of Paris.

Against that backdrop, Secretary Moniz sat down with Fortune. The following is an abridged version of the conversation.

Moniz: Of course it is not yet finished, but I would say already we have a substantial success coming into COP 21, with almost every country in the world declaring their targets [for reducing carbon emissions]. That is already a major platfrom for the road from Paris, going forward. Secondly, another success to pocket already is the announcement from President Obama and leaders of 20 countries on what is called “mission innovation,” to double our energy R&D over the next five years and create opportunities for investors, with people like Bill Gates joining in. It really has brought out the centrality of innovation.

What are the major sticking points to a deal?

Moniz: What remains to be done in the negotiations is to resolve other issues. The INDCs [Intended Nationally Determined Contributions, which each country in the world submitted, giving commitments for the next 15 years] are critical. But what will the final agreement say about verification? We all know that the INDCs are not enough to get us to 2-degrees [Celcius] or lower.

How are you going to sell this agreement to Congress? Already the Senate has made it clear there is no way they will ratify a legally binding agreement.

Moniz: The President’s climate plan is firmly rooted in existing authorities. So the climate action plan is moving forward. The Department of Energy, after Paris, will keep expanding innovation programs, and that has quite a lot of support.

There has been a lot of talk about climate change being a real financial risk. Investment firms and banks saying it is not just about saving the planet, this is a real risk to investors. What impact has that had?

Moniz: We’ve seen very strong support from business in terms of the agenda, and in fact support from business will be one of the key enablers for aggressive implementatoin of the deal—and, by the way, seeing our Congress come forward with legislation that is appropriate to climate risk mitigation. What business is asking for is some certainty. They would like to see clear commitments over a substantial period of time. And then they can make business decisions that involve whether and when to strand assets.

How crucial have these past weeks in Paris been?

Moniz: Even if COP 21 does not give specific rules of the road, it will give a very clear signal of direction. Paris has been very important. It would say in particular by having the approach of countries declaring their targets in advance. I think a major turning point was the combined announcement of President Obama and Chinese President Xi last November [a joint commitment to lowering carbon emissions]. That was a very, very significant event. Before, many in Congress often fell back on the argument that China wasn’t doing anything. Suddenly that change. That kicked off a very different international conversation.

You are headed back to Washington: What is next in the U.S. on climate?

Moniz: We have the Clean Power Plan. We have had a year of building consensus. This is a big signal going forward. And clear businesses will be looking into this [agreement in Paris] being converted into the rules of the road.

And what about the climate deniers and skeptics?

Moniz: I think they will fade from the scene. It is really not debatable that we have to respond. It is debatable about how we respond, and the scope and pace. Of course, I think we need to pick up the pace. But we are in a presidential election year. When we are past that, I should hope and I expect that the discussion will get down to the issues of how we are going to respond, and what kinds of legislation we need to put in place.

Elon Musk: Only a Carbon Tax Will Accelerate the World’s Exit from Fossil Fuels

What the Paris Climate Talks Mean for Utility Companies

9 Numbers to Know From the Paris Climate Change Summit