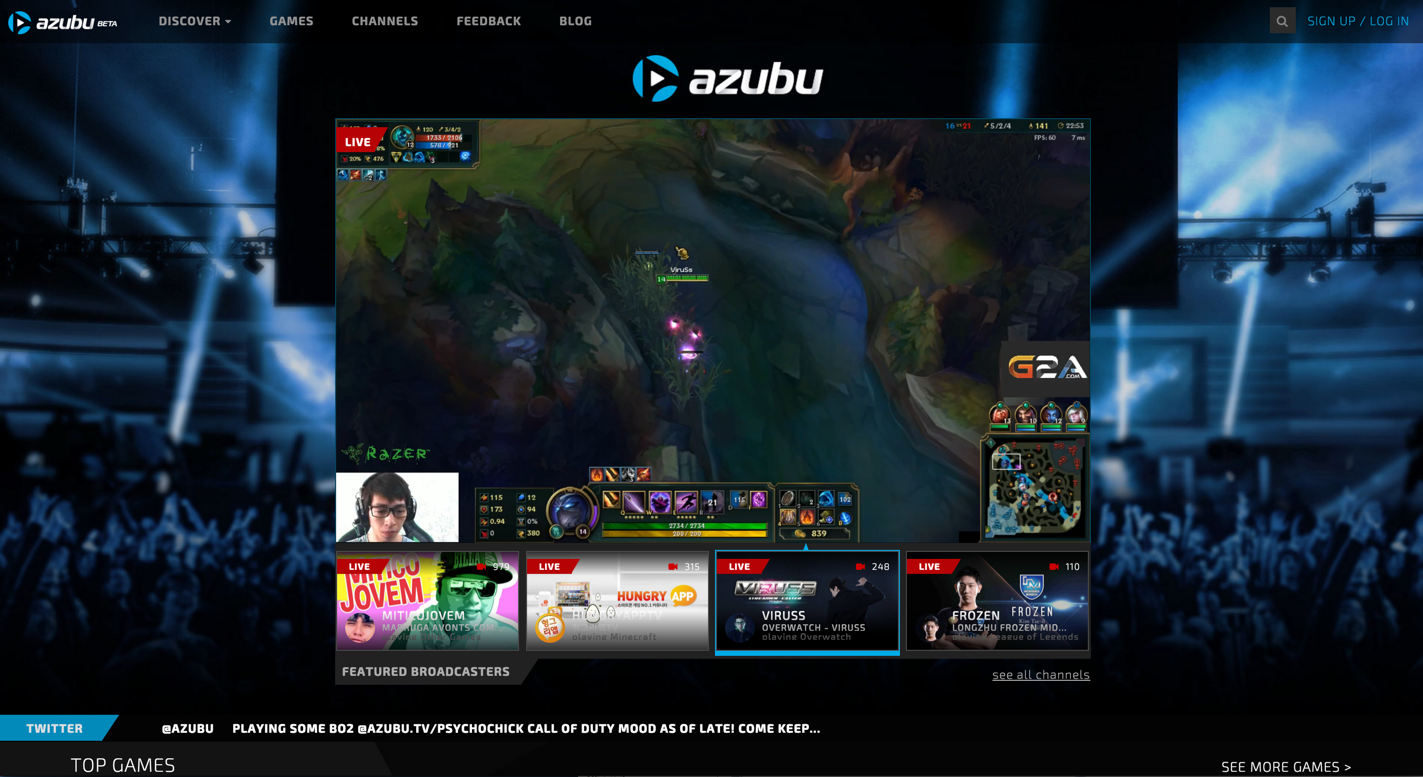 When it comes to the video game live-streaming market, Amazon-owned Twitch leads the pack. And YouTube has upped its game this year, launching YouTube Gaming and focusing more on gaming content.

But the live-streaming market has multiple smaller companies and startups vying for new gamers, including Hitbox, DingIt, and Azubu, a Los Angeles-based startup that just raised $59.8 million in a funding round led by London-based Sapinda Group. Contributions also came from Sallfort Privatbank of Switzerland. Sapinda Group previously invested $34.5 million in Azubu in March 2014.

“Clearly there are two big fish attempting to dominate this pond in Twitch and YouTube, but what we’re doing is focusing solely on eSports live-streaming and the eSports ecosystem,” Azubu CEO Ian Sharpe says.

Azubu has seen its audience grow 1,200% from October 2014 to October 2015 to 9 million monthly unique views, according to Sharpe.

Sharpe says the new Azubu funding will help continue the company’s global expansion into new markets like Brazil, India, China, and the Philippines where Twitch and YouTube aren’t focusing on eSports. Azubu supports eSports coverage across the globe in local languages, which Sharpe says is another important differentiator.

Llamas sees additional eSports growth opportunities in Brazil as well as the rest of Latin America thanks to the expansion of Internet infrastructure. In addition, Llamas says the growth of smartphones and other connected devices in India opens up new opportunities with its huge audience.

Peter Warman, CEO at research firm Newzoo, says Azubu has a very different business approach from Twitch and other companies.

“Azubu is focused on getting content rights and then riding the wave of growth that could help them cash in when media rights are traded similar to traditional media—if that day ever comes,” Warman says. “They also invest in getting famous streamers to come to Azubu.”

Warman belives Azubu will be acquired by a traditional broadcast or digital media company within the next two years because its business approach aligns with these companies.

“Having 100 million viewers isn’t of much value to a sponsor if you don’t do anything,” Sharpe says. “Tournament companies are looking for us to innovate around that.”

Sharpe says other major brands will follow the path that nonendemic brands like Coca-Cola, Red Bull, and American Express have paved in the early days of eSports.

“The good news is that we’re in the digital and games space and we know that e-commerce and advertising work in those markets, and we know gamers spend a significant amount of time and money in eSports,” Sharpe says. “It’s just a matter of time for trust in eSports to build and the experiments we’re doing with gaming brands to deliver new brands.”

Sharpe says based on the calls and emails he received from potential sponsors, 2016 is shaping up to see a major expansion beyond the core gaming brands in eSports. And as this ecosystem evolves, there’s room for multiple players in the live-streaming market.

“When you look at eSports as an ecosystem, you don’t want a monopoly because that’s bad for business,” Sharpe says. “Some of the teams and leagues would love to see a great alternative to Twitch and they’re rooting for us.”

As are investors, who are placing their bets on this growing eSports company.

See how YouTube gaming stacks up to Twitch in this Fortune video: