Why This Coding Bootcamp Is Teaching Empathy 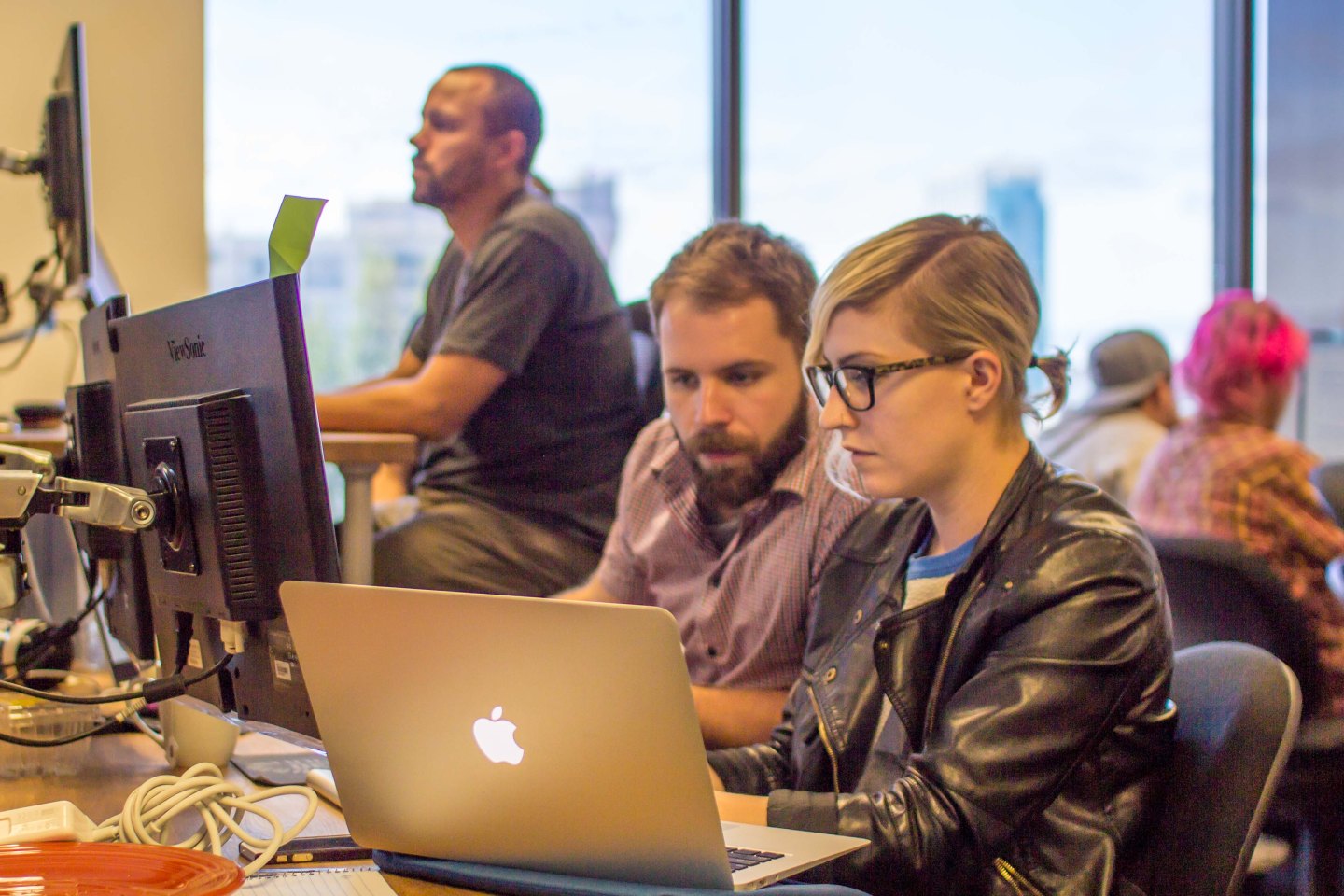 The explosion of coding bootcamps has made it easier than ever for women to break into the tech industry. Now, one such program has a plan to help keep them there.

Women represent around 20% of engineering graduates, but just 11% of practicing software engineers, according to the Center for the Study of the Workplace. Of the women who persevere through academic and social obstacles and secure developer jobs at tech companies, 56% leave those companies within a decade, citing hostility and isolation in the workplace as their primary motivation for quitting.

Dev Bootcamp created the Engineering Empathy program in an effort to slow—and hopefully eventually halt—this exodus. Engineering Empathy is a series of seminars that “focus on the human side of software development” and make up 20% of the bootcamp’s curriculum.

Dev Bootcamp is a 19-week program that trains students to become full-stack web developers, then helps them find jobs. The program was founded in 2012 and has since graduated 1,700 students across its campuses in Chicago, New York, San Diego and San Francisco. It is one of many “code bootcamps” to crop up over the past few years in response to growing national interest in the tech industry and its abundance of high-paying jobs.

Many code schools and bootcamps tout diversity as a top priority, and in fact, women represent more than 36% of the students in these programs. Some, such as Women Who Code, focus on a specific group, while others offer scholarships to women and minority candidates. However, Anne Spalding, the director of Dev Bootcamp in San Francisco, says these efforts alone won’t create significant change, since developers don’t work in a void. Overcoming the gender gap not only requires getting more women into developer positions, but also ensuring that they stay there, which requires more than coding chops.

“Every week, it seems like there is a new report about how women should ‘lean in’ and be more assertive,” says Spalding. “I think rather than asking women to adjust to the majority, we should help create systems of inclusion, and ask the majority to open up so more voices can be heard.”

Engineering Empathy strives to give coders of all genders the knowledge and emotional skills to cultivate inclusive work environments. The program consists of six core units: feedback and teamwork, diversity and allyship, resilience and the inner critic, empathy and authenticity, navigating difficult conversations, and team dynamics. During these sessions, students are taught how to communicate and effectively engage with other people—including people unlike themselves. They also dive into the nuances of discrimination, privilege, and oppression, and explore how subtle forms of bias, such as so-called microaggressions (defined as everyday verbal—and nonverbal—slights that communicate negative messages) can amass into an unwelcoming atmosphere. Many of these sessions involve pairing off to practice handling sensitive conversations.

“We give all our students the tools and language they need to recognize when an environment is not inclusive, so they don’t think it’s just them,” Spalding said. “One of our goals is to empower them so when they get out into the workplace, they have the ability to start affecting change.”

Cari Westbrook applied to Dev Bootcamp after not getting into graduate school for environmental science. She said she felt a sense of relief at the rejection, prompting her to rethink her career path. One of her friends attended a code school called App Academy, which inspired Westbrook to look at similar programs. She chose Dev Bootcamp because of its Engineering Empathy program.

“I didn’t really know what to expect with Engineering Empathy,” she said. “I knew it was going to be a little touchy feely, but I didn’t have a lot of confidence in my own ability to succeed. I felt like a program that was about more than coding, that taught me in a holistic manner, would at least keep me happier while I struggled.”

A sizeable chunk of the Engineering Empathy program takes place during the first three weeks of the Dev Bootcamp curriculum. The first session addresses the Superego, and prompts students to face off with the negative thoughts they turn on themselves.

“This session really resonated with me because it caused me to think about things I have been struggling with my entire life—mainly self-confidence,” Westbrook said. “I came out of it realizing that my entire life has been built on me being really cruel to myself and not believing in myself. That’s kind of terrible, and it’s the thing I worked on the most.”

Subsequent sessions covered discrimination and stereotype threat, the risk of confirming a negative stereotype about one’s social group. Westbrook said that talking about these topics openly made her reassess her own identity, as well as what it’s like to be a minority in a community.

“Before bootcamp, I never considered myself a feminist,” she said. “Now I have really strong opinions, because I realized that I was entering a field where I would be a minority for the first time. It became apparent how strongly that was going to affect my success.”

After graduating from Dev Bootcamp, Westbrook joined a San Francisco startup called Shuddle, which provides safe rides for kids. She is the only person on her team who went through the Engineering Empathy program and says that experience helped her become a more effective communicator, as well as more confident in her coding. In addition, she feels equipped to address potentially sensitive topics, such as bias.

“Talking about sexism and the struggles that women in tech face is one of the biggest ways to help undermine it,” she said. “Bootcamp has made me an advocate for other women, and that is the thing I am the most proud of in my life right now.”

Dev Boot camps aims to spread the Engineering Empathy message via its graduates, says Spalding. “We have over 1,700 graduates out there who have this idea that an inclusive environment is attainable and necessary,” she says. “I think it’s a snowball effect. As we have more and more graduates, it will continue to grow. Everybody wants to figure out how to make their company inclusive and get over the gender gap.”

A number of companies that have hired Dev Bootcamp graduates have asked the program to teach Engineering Empathy at their offices to all their employees. Dev Bootcamp recently conducted an initial pilot with two tech companies and is currently looking at ways to further scale the program.

Combating bias and discrimination is a worthy cause in its own right, but there are business benefits as well. It is now well known that diverse teams outperform their homogenous counterparts. Plus, more empathetic engineers are actually better at their jobs. Research from the University of Georgia and the American Society for Engineering Education discovered that empathy helps engineers to develop a more “nuanced, critical understanding of the multiple perspectives that characterize contemporary engineering problems.”

The takeaway is clear: For a developer, the ability to effectively communicate and be sensitive to other people is arguably as important as knowledge of Ruby and JavaScript. With Engineering Empathy, Dev Bootcamp is attempting to deploy a new educational paradigm that teaches the “whole” person, and recognizes that teams are more productive when sensitive topics, like sexism and bias, are up for discussion.