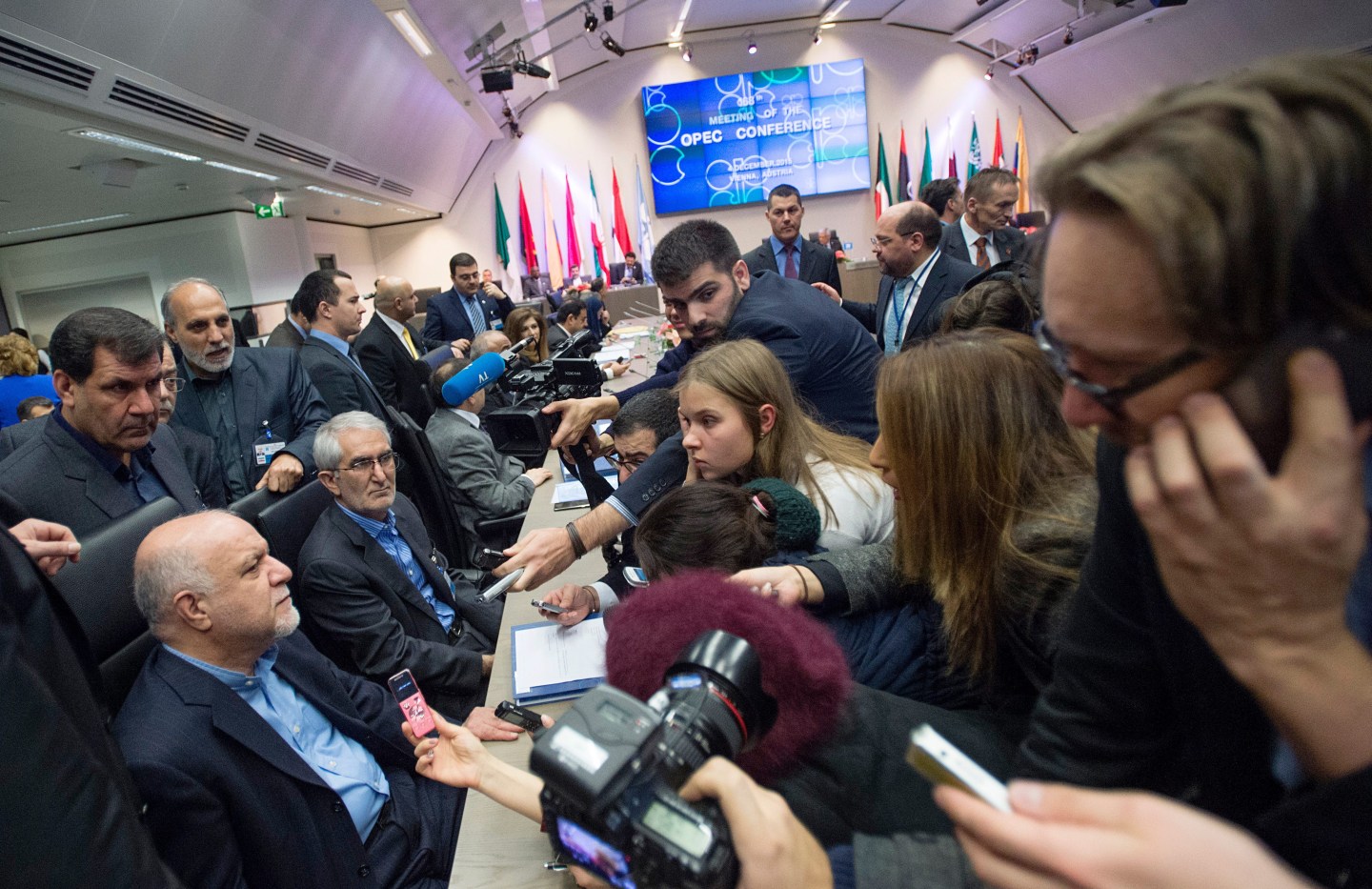 Oil-producing countries looked unlikely to reach a deal to lift languishing prices at a meeting on Friday after Iran, Iraq and Russia swiftly rejected a surprise proposal that appeared to have been floated by Saudi Arabia.

Saudi Arabia, the largest oil producer in the Organization of the Petroleum Exporting Countries (OPEC), was prepared to propose members cut oil output by 1 million barrels per day next year if non-OPEC countries joined in, industry publication Energy Intelligence reported. The report pushed crude futures up 3% at one stage Thursday.

Saudi Arabia has long insisted it would cut production only if fellow OPEC members and non-OPEC countries joined in. The report quoted a senior OPEC delegate as saying the Saudis would agree to cuts if Iraq freezes production rises and Iran and non-members such as Russia, Mexico, Oman and Kazakhstan contribute.

But Russia and OPEC members Iran and Iraq quickly rejected the idea. OPEC and non-OPEC producers have not cooperated to tackle low oil prices since they joined forces 15 years ago to help the market recover from the 1998 financial crisis.

Since then top non-OPEC producer Russia has repeatedly resisted calls for joint action and grown its output by 70%. Iran also wants to increase output after years of Western sanctions.

“We do not accept any discussion about increases of Iran production after the lifting of sanctions. It is our right and anyone cannot limit us to do it. We will not accept anything in this regard,” Iranian oil minister Bijan Zangeneh told reporters in Vienna before an informal gathering of ministers on Thursday. The formal meeting started at 0400 ET Friday and will last most of the day.

“We do not expect out colleagues in OPEC to put pressure on us,” Zangeneh said. “It is not acceptable, it’s not fair.”

Iran will raise production by up to 1 million barrels a day following years of forced curbs because of the sanctions over its atomic program, he added.

Russian energy minister Alexander Novak told local news agency RIA that he saw no need for Moscow to cut oil production, adding that he did not expect OPEC to change output policies at its meeting on Friday. In contrast to most of OPEC’s members, a large part of Russian output comes from private companies, who could legally challenge any attempt to cut their production.

Saudi Arabia has been the main driver of OPEC’s current policies to pump record volumes of crude to push higher cost producers, such as newcomers tapping into U.S. shale, out of the market, so if a proposal to cut output was confirmed it would suggest a change in a approach.

U.S. output has decreased over the past year but other producers such as Russia remained more resilient. As a result oil prices more than halved in the past 18 months, causing large budget shortfalls across most energy rich nations.

For Saudi Arabia, the prospect of big fiscal deficits has already prompted officials to float the idea of potentially unpopular reforms, including introducing value added tax and cutting energy subsidies.

Reduced oil revenue is also causing some of the influential business class to push Riyadh to quickly find an end to its expensive war in Yemen, the kingdom’s biggest strategic gambit in decades, and one that defines King Salman’s foreign policy.

Saudi Arabia’s proposal may also be seen as an attempt to head off calls for action from poorer OPEC members such as Venezuela, but the conditions are tough to implement.

“‎It is very difficult to cut one million bpd collectively. The Saudis do not want to change their previous talk. No cut without cooperation,” a Gulf OPEC source told Reuters.

Some banks, including Goldman Sachs, are predicting oil could fall as low as $20 a barrel if a global glut persists.