How Jack Welch Is Reinventing the MBA 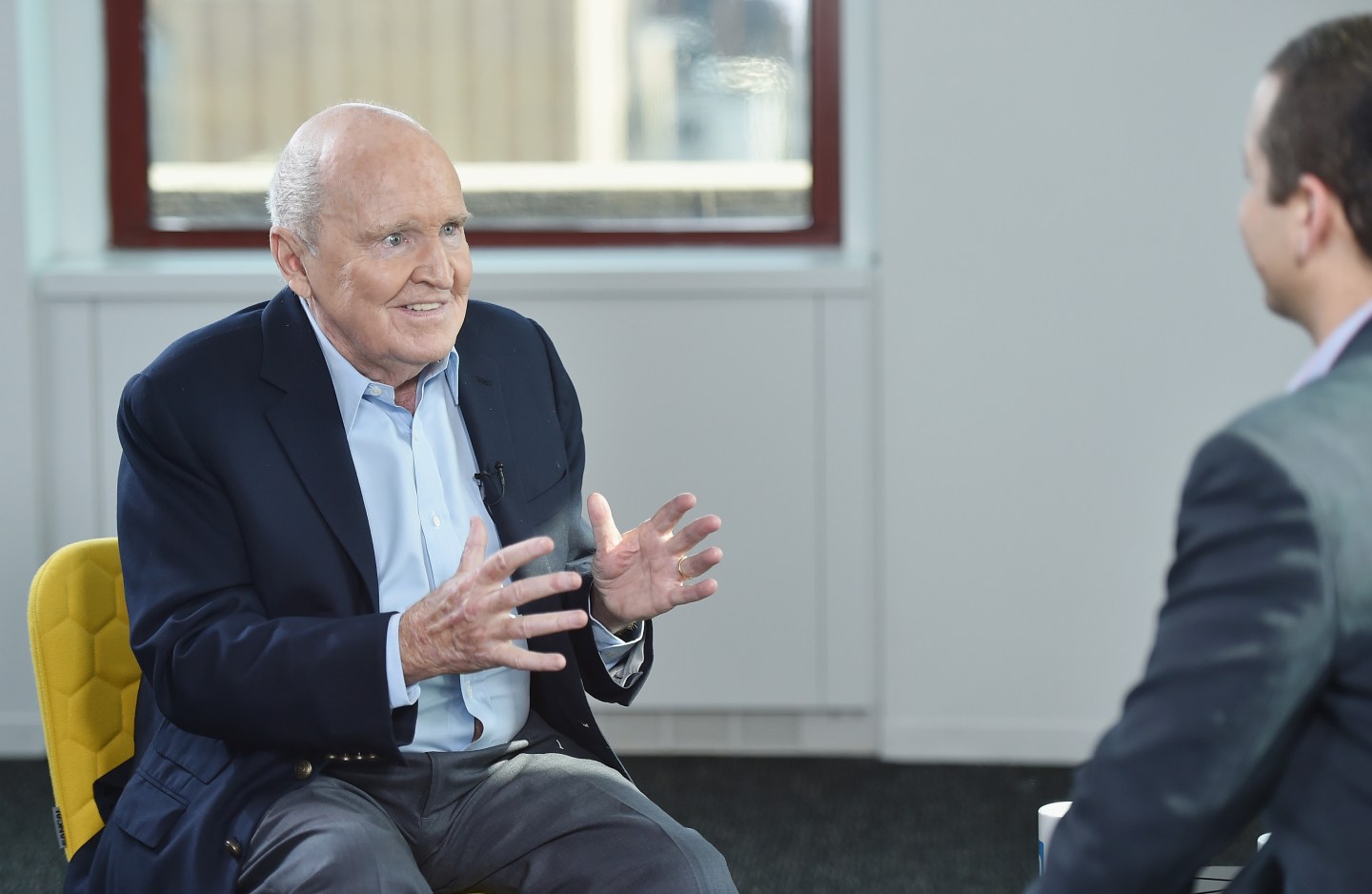 When legendary General Electric CEO Jack Welch hired a headhunter to search for new deans of curriculum and faculty for his online management institute, he had an unusual requirement.

Despite that limitation, Kirkman had little trouble rounding up an impressive portfolio of higher ed candidates.

“Everybody was very interested, particularly with Jack’s name attached to it,” Kirkman says. “A lot of them are just tired of the bureaucracy and garbage that goes on in traditional academic environments.”

Welch ultimately hired Craig Clawson, former managing director of Duke Corporate Education, as dean of curriculum, and Mike Zeliff, a faculty member at George Washington University and a former marketing director for the U.S. Marine Corps, as the dean of faculty.

Both hires go a long way in telegraphing the fact that the four-year-old Jack Welch Management Institute is one of the very few business schools that is run like a business, with a laser-like focus on customer service. The school is closely managed on student surveys that measure the impact of the education as well as the likelihood that a student would recommend the institute to a friend or colleague.

At JWMI, every administrator and faculty member understands that students are customers. In fact, the incentive pay of the core leadership team—up to 25% of their annual base salaries—is based on satisfying those customers. Net Promoter Scores (NPS), the metric Welch is using to monitor student satisfaction, are widely discussed among the leadership team, even down to the scores on the 12 courses that make up the MBA curriculum.

“We’re running this school the way we would run a company,” insists Welch, who turned 80 last month. “Most business schools are disconnected from best business practices. It’s not that they don’t teach them. They just don’t practice them.”

That approach to an online MBA program based on Welch’s leadership beliefs has led to fast growth at a time when the overall MBA market has been flat or in decline. The school has increased its student population to more than 1,000 MBA students in four years and expects to boost enrollment to 1,400 students in 2016. This year MBA enrollment jumped 35% to 1,057 students, from 782 in 2014.

It’s clear that the growth is due to a confluence of factors: Welch’s reputation and brand; a pragmatic education based on Welch’s well-known dictums; the relatively low $39,000 price of the program (Indiana University’s Kelley Direct program costs $66,000, while the University of North Carolina’s MBA@UNC is priced at $99,700); and high levels of student satisfaction. The institute’s Net Promoter Score this summer reached a record 77, better than Amazon (69) or JetBlue (68) and nearly as high as America’s NPS leader, Costco (79).

When Duke University’s Fuqua School of Business measured the NPS of its MBA program in October, the school found that it hit an impressive 67, 10 points lower than the Welch Institute. Still, a 67 is on par with the iPhone (67) and just below Apple itself (70). It’s also much better than surveys done by the business school student newspapers at both Harvard and Wharton. In those unscientific polls, Harvard Business School had an NPS of 41, while Wharton was 10 points higher at 51.

The reason for the high scores? “We are changing lives and that is a big deal,” says Welch.

The institute’s survey of this year’s graduates, for example, found that 70% said they had received a promotion or double-digit raise since the start of the program; 98% agreed that the MBA program was a valuable investment; and 27% said it was the best investment they ever made. All 100% of the graduates agreed that their confidence as a leader had grown as a result of the program.

The average age of a Welch student is 38, though they range from 30 to 60. Each class size is limited to 20 students. The degree—with all classes, discussions and projects done online—can be completed in a minimum of 18 months.

Welch says the acceptance rate for applicants to the program is about 80%—not that much different than the 76% rate at Indiana University, the 72% rate at Temple University, or the 51% rate at UNC, the three top-rated online MBAs by U.S. News & World Report.

“We are not wed to an old way,” says Dean Sippel, CEO of the Jack Welch Institute. “It is a true meritocracy. We want the best people who can deliver the best student outcomes.”

Welch is the first to admit that his online MBA is not for everyone.

“We’re not going to help you on Wall Street,” he concedes. “If you want that, go to Wharton! Our students are primarily owners of small companies who want to do better. They want to learn to manage more effectively. We help them do that.”

Clawson, who joined the institute in late July from Duke Corporate Education, where he was managing director, agrees. “We really are driven to improving lives in a very practical way,” he says. “We want people to see results right away.”

Clawson says it’s critical to listen intently to “the voice of the customer.” Students are asked for their candid feedback on every aspect of the curriculum, the courses, the faculty, student services and events.

“The student feedback piece is just intense and incredible, much more so than I have experienced in other educational environments,” says Clawson. “We make sure people learn the concepts and, more importantly, can apply the concepts.”

Consider what happened with the institute’s core course in finance when the satisfaction scores began to lag.

“Our finance course was just not the most exciting course you could take,” says Mike Zeliff, dean of faculty. “The faculty would say you are only going to make accounting and finance so exciting.”

So Zeliff recruited John Shaw, a finance executive who had spent nearly 24 years with Procter & Gamble in various financial roles. Shaw made the course more applied than theoretical and the NPS scores climbed from the low 70s to a high of 98.

Teaching at an institute where there are 45 adjunct teachers and four full-time profs is nothing like traditional academia. Faculty are screened and then measured for their passion to engage, challenge and excite students. They hold a PhD or terminal degree in their field of expertise and have, on average, 20 years of professional experience.

It’s telling, perhaps, that the school’s faculty drafted its own guiding principles and a list of values and behaviors. The No. 1 value is “Generosity: Believe in our students. Focus on student success. Coach and mentor. Engage with compassion and understanding. Offer candid feedback. Instill confidence.”

And one of the guiding principles notes that great course content will not overcome poor instruction. “Faculty relentlessly focus on superior instruction and continuous improvement,” it says.

There is, of course, no tenure.

“Tenure is the worst invention,” deadpans Welch, who deploys a GE-like performance culture that weeds out the bottom 10% of the faculty who fail to get the best scores from students.

“We celebrate the top 20%,” adds Zeliff. “We coach around the 70% and take a hard look at the bottom 10% and ask whether this is the right spot for them. We do that every quarter. and we send all that information to the professors.”

When Zeliff hires in new faculty, he asks them to first spend time as a teaching assistant to judge the fit between them and the school.

“They need to be up on the research, but what I really need them to be is engaged and engaging in the classroom and making the most of every interaction with the students,” Zeliff says. “You have to have the practical experience to bring the teaching to life and the willingness to support students the way we expect. And if you don’t believe in Jack, you shouldn’t be here. That is just a given.”

Welch is deeply engaged in the enterprise. He hosts quarterly videoconferences with students, pops up in videos about current business events, interacts with students via email, and is all over the program’s curriculum. Every work day, Welch receives two reports on leads, applicants, and enrollments, as well as the NPS survey results.

At one briefing with Welch, recalls Zeliff, the NPS numbers were going in the right direction and the team was overjoyed with the results. “We had only 18 detractors, and we were pretty excited by the result,” he says. “Jack wanted to hear about those 18. I said, ‘That’s not really the story,’ and he said, ‘But every one of those stories is an opportunity to get better. We didn’t fulfill their expectations.'”

Welch, meantime, cannot conceal his delight at the institute’s acceptance and growth. He notes that Clayton Dubilier & Rice, the private equity firm where he serves as a senior advisor, is now funding 20 students in his MBA program, with a second cohort to start in January. The students are high potential middle managers from 15 companies in CDR’s portfolio.

“The test was whether a PE firm with a bunch of MBAs love the result,” says Welch. “Well, they love our faculty, and they can’t get enough of it. It’s unbelievable.”