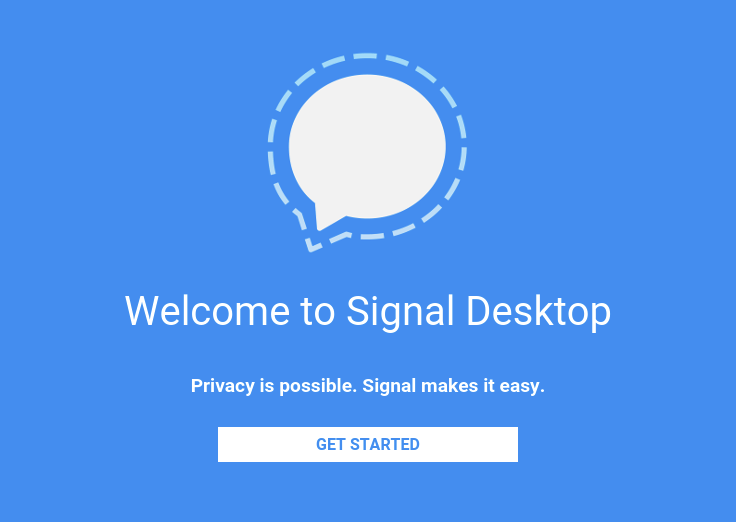 Without a doubt, the app that has generated the most buzz within privacy circles of late is Signal, a secure messaging service.

The app is marketed toward anyone interested in privacy—whether one happens to be leaking sensitive documents or shooting the breeze with friends. It’s free to download, and it consistently ranks at the top of many cryptographers’ shortlist of communications tools in terms of security and convenience.

Open Whisper Systems, the nonprofit software group based in San Francisco, Calif. that developed it, on Wednesday released a beta version of the encrypted chat app for desktop computers. Previously, the app was only available on tablets and iOS and Android-powered smartphones.

Now private conversations conducted through Signal can sync across all of a user’s gadgets. There are a few stipulations though.

The desktop version comes only as a Google (GOOG) Chrome Web app (no Mozilla Firefox); it supports only text messaging (no calls); and it connects with Signal accounts only registered on Android devices (no iOS).

Moxie Marlinspike, the founder of Open Whisper Systems, told Wired that additional features—such as voice and file-sharing—as well as compatibility with iOS—are planned.

A commenter on a Hacker News forum griped about some of these initial restrictions, saying that “Unfortunately this release just deepened my belief that Signal wasn’t meant to be for me.” Marlinspike appears to have responded personally to the criticism by suggesting several options, such as employing a throwaway phone number or using alternative open source software such as the free Chromium browser.

Usability is, of course, a top concern for Marlinspike. “We want to produce technology that is privacy preserving but feels just like everything else people already use,” the commenter bearing his name wrote, “not somehow convince everyone to fundamentally change their workflow and their expectations.”

Indeed, there are two reasons why many technologists often shower praise on Signal: 1) for its sleek design and 2) for the powerful cryptography underneath its hood. The app, in other words, looks pretty, its easy to use, and the code behind it is, so say experts, highly secure.

Go ahead, audit the software yourself—it’s open source and available for review on GitHub. Or take a cryptographer’s word for it.

Other secure chat apps include Wickr and Telegram. The Electronic Frontier Foundation has a scored a host of messaging apps in terms of their privacy and security here. (Signal scored a seven out of seven.)

Follow Robert Hackett on Twitter at @rhhackett. Read his cybersecurity, technology, and business coverage here. Andsubscribe to Data Sheet, Fortune’s daily newsletter on the business of technology, where he writes a weekly column.

For more about encryption, watch the video below: