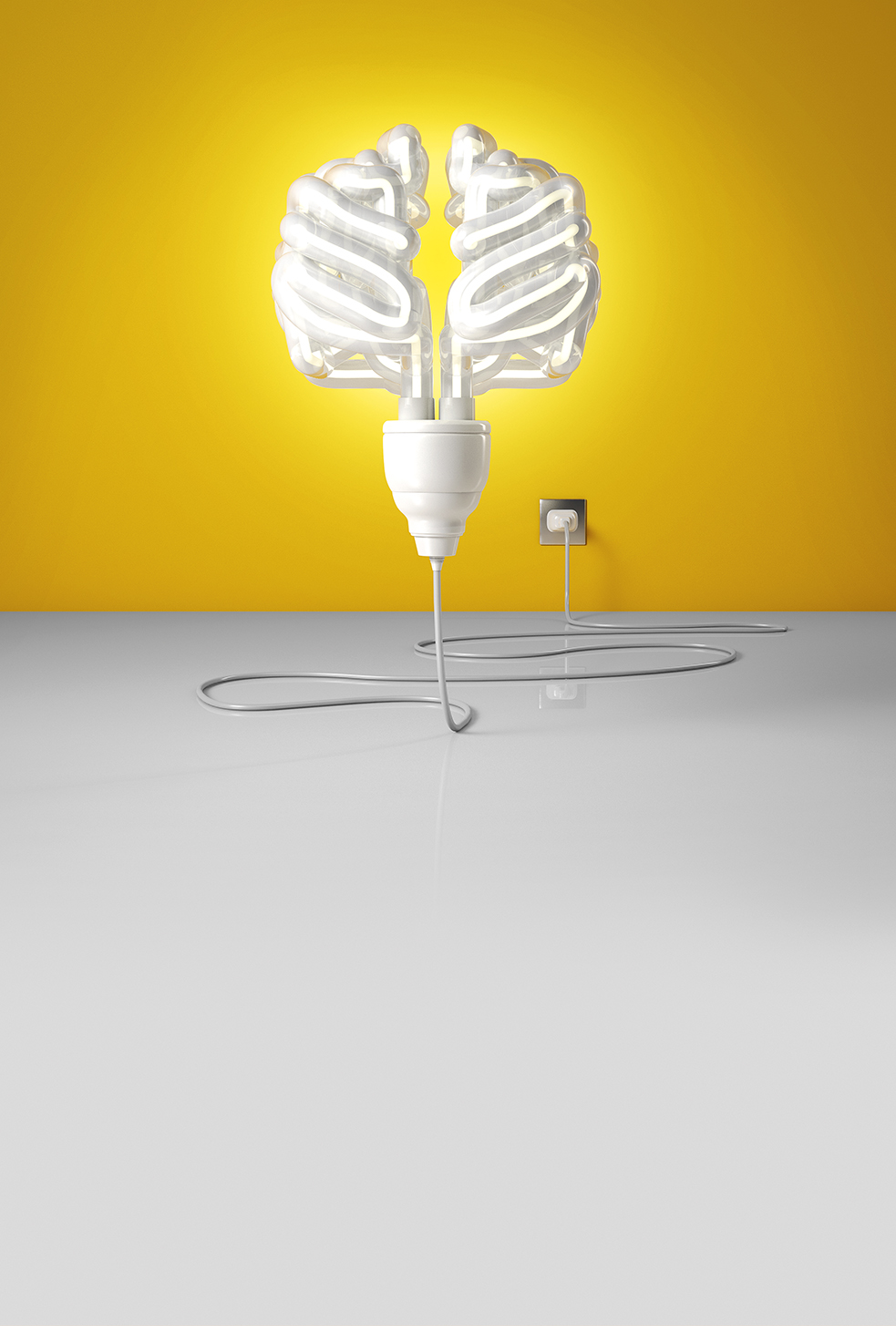 If there were a system or a product that could make you, say, 10% smarter, you’d buy it in a second, right? That’s been the promise of the “brain training” field, which has grown to a $1.3 billion market through products like Lumosity, a series of online word games and mind twisters that has amassed 70 million users. And that’s just one of many options. There’s “neuroleadership” coaching, $15,000 intensive brain-training retreats, even coffee shops promising cognitive-enhancing joe.

Now, faster than the current coursing through your cerebellum, the field is burgeoning into what could be called Brain Training 2.0. The new generation consists of devices that promise to monitor or stimulate your brain to make you calmer, more focused—perhaps even smarter. Priced from $79 to $595, these wearable gadgets—with names like Melon, Emotiv Insight, Melomind, iFocusBand, and Narbis—aim to gauge your cerebral activity using electroencephalography (EEG) and then redirect your focus. Other companies, such as Thync, Fisher Wallace Laboratories, and Halo Neuroscience, use mild electric pulses that purportedly activate certain connections in your brain. Some—such as Halo, backed by Andreessen Horowitz, and Thync, whose lead investor is Khosla Ventures—even have the blessing of top venture capitalists.

The brain fitness market is expected to grow to $6 billion by 2020, according to SharpBrains, which tracks neuroscience trends. This could be the start of on-demand cerebral boosters, says Amy Webb, who forecasts such trends as the founder of Webbmedia Group Digital Strategy. “Just as you might adjust the temperature of your living room with your mobile device before you get home,” she says, “you will adjust your mood so you are relaxed yourself when you walk in the room.”

That’s the hope, in any case. For now, it’s safe to say, the devices are advancing faster than the research. “It’s a little bit of the Wild West right now,” says Rex Jung, a neuropsychologist and an assistant professor of neurosurgery at the University of New Mexico. “The science just isn’t there to warrant efficacy.”

The good news is that the field is expanding because new technology has vastly improved our understanding of how the brain works and EEG equipment is growing less cumbersome and much cheaper. Much of the excitement centers on neuroplasticity, the brain’s ability to reorganize itself by forming new connections between cells, and neurogenesis, its ability to create new neurons long into life.

The upshot: It’s never too late to change your brain. “People are going to pay more attention to brain health in ways they never did before,” says Scott Halford, CEO of a consultancy called Complete Intelligence, which teaches executives to optimize their thinking based on neuroscientific research. He’s also the author of Activate Your Brain: How Understanding Your Brain Can Improve Your Work—and Your Life.

Top experts express reservations about today’s technology—but a belief that the field is real and heading in promising directions. The EEG devices are similar to biofeedback devices and can be helpful, says Alexander Bystritsky, a psychiatrist who leads UCLA’s deep-brain stimulation program. “They’re a little bit like vitamins,” he says.

He also sees benefits to the other category, wearables that apply electrical impulses to the brain. Many of these use something called transcranial direct current stimulation. Bystritsky says research establishes that superficial electrical stimulation causes minimal side effects, and some studies have shown it can be an effective treatment for depression and anxiety. The FDA has approved a handful of such devices to treat mental illnesses, and neuroscientists have explored whether they could help in everything from learning math to stroke recovery. At one point the Defense Advanced Research Projects Agency tested whether it could put military snipers into a flow state for improved accuracy.

Yet no one yet understands exactly how and why (or why not) the devices work, where to apply currents, and what kind of strength to use. So says Daofen Chen, a clinical neurophysiologist and program director at the National Institute of Neurological Disorders and Stroke (NINDS). “The bottom line is that we don’t know how the brain works,” he says. “We don’t know the principal of how the current is moving around in the pathways.”

The research has given rise to do-it-yourself kits, sold for $39.95 to $189 online. YouTube videos even demonstrate how to make stimulators using nine-volt batteries. (We’ll let you make your own judgment on the wisdom of assembling your own device and using it to apply voltage to your skull.)

Entrepreneurs are placing bets on more sophisticated versions, both to treat serious brain disorders and to optimize more normal cerebrums. A company called Neuroelectrics has generated $2 million in sales in Europe of a swim-cap-like device that uses electrodes to treat patients with neuropathic pain or strokes. Neuroelectrics is now conducting clinical trials in two Boston hospitals. Meanwhile, Halo is building wearable devices that aim to improve memory and cognitive performance, as well as treat neurological and psychiatric disorders like stroke, depression, and even Alzheimer’s disease. Halo’s co-founder and CEO, Daniel Chao, compares today’s brain treatments with the Model T era in the auto industry. “We haven’t even scratched the surface,” he says. Chao and co-founder Brett Wingeier bring credibility to Halo: Their previous business, NeuroPace, developed an FDA-approved implantable brain stimulator for epilepsy.

Halo’s new device, Chao says, has been tested in double-blind, controlled experiments with 1,000 people to determine efficacy and safety. He says Halo is working with researchers on clinical trials to treat various brain disorders. “Of course, there will be questions about how well it works and whether it’s safe,” he says.

Isy Goldwasser, CEO of Thync, says it has spent years studying its device’s efficacy and safety, including MRIs and EEGs on more than 4,000 people. (The device does not use trans-cranial stimulation.) That includes a recent study finding that people who used the device reported lower tension and anxiety compared with those using the device equivalent of a placebo.

His product certainly has fans (though my experience was less inspiring; see sidebar below). Boston hairdresser John Clark, 69, says he has been using the device five or six times a week since August. “Once I got my range, it works out beautifully,” says Clark, who adds that it has helped his depression and insomnia. Goldwasser says Thync has sold “millions of dollars” in devices in the four months since their release.

The overall picture is still murky, and the evidence inconclusive. “There are ethical debates in the literature and in public discussions about the clinical readiness of the brain-stimulation devices and when and how they should be used,” says Chen of NINDS. For now consumers will be using the earliest iterations of the technology, which will likely improve over time. But it’s not always ideal to be an early adopter. “People should know there is a risk,” Chen says. “And in a way they are research participants.”

I Tried to Thync Different

What happened when the author tested an electrical brain device?

There’s nothing like firsthand experience, so I decided to try the Thync module, a $299 device that has been on the market for four months. It targets a branch of the trigeminal nerve, according to Thync, to trigger the sympathetic and parasympathetic nervous systems. The FDA has exempted the module from regulation, finding that it is not a medical device. (That seems like the gadget equivalent of nutritional supplements: It’s nice not to be hampered by government drug rules, but many consumers don’t trust supplements precisely because they’re not regulated.)

The module uses adhesives that attach to your temple and send “vibes,” or low-energy waveforms, to signal neural pathways. The idea: help you unwind or, conversely, boost energy. Thync describes the gizmo’s range of effects as somewhere between that of a glass of wine and a shot of espresso. (The use of “vibes” seems an unfortunate choice of terms, conjuring, as it does, a 1970s surfer rather than a medical treatment.)

The module arrived in sleek black packaging with instructions on how to pair an iPhone with it using Bluetooth. I chose “calm,” which meant attaching a small triangular module to my right temple using an adhesive and fastening the other end of the strip to the back of my neck. (For “energy” I used a different adhesive and put it on the back of my ear.)

After downloading the Thync app, I selected a 10-minute calm vibe, in which a woman’s voice walked me through the session, telling me to relax and how to adjust the energy as mellow guitar music played in the background. After a few minutes she instructed me to increase the level of intensity to find my “sweet spot.” Yet when I did the electrical current became a pinching, almost painful buzz that gave me a slight headache and forced me to readjust the module on my temple several times. After a while I found a tolerable position and level. I was anything but relaxed—I couldn’t wait to get the module off my head, though I did feel less stressed for an hour afterward. My attempted energy boost the next day didn’t go much better. I quit midway through the 15-minute session after adjusting the module several times and feeling painful shocks.

Thync’s co-founder and CEO, Isy Goldwasser, says my experience is common for first-timers because getting the module in just the right place takes practice. “It usually takes three to five times, and after that it’s something you look forward to,” Goldwasser says. At his recommendation I tried again with help from a Thync rep via Skype and had a more soothing experience. Yet afterward I didn’t feel much outside of a sore and tender temple.

A version of this article appears in the December 1, 2015 issue of Fortune with the headline “Electrify Your Mind.”