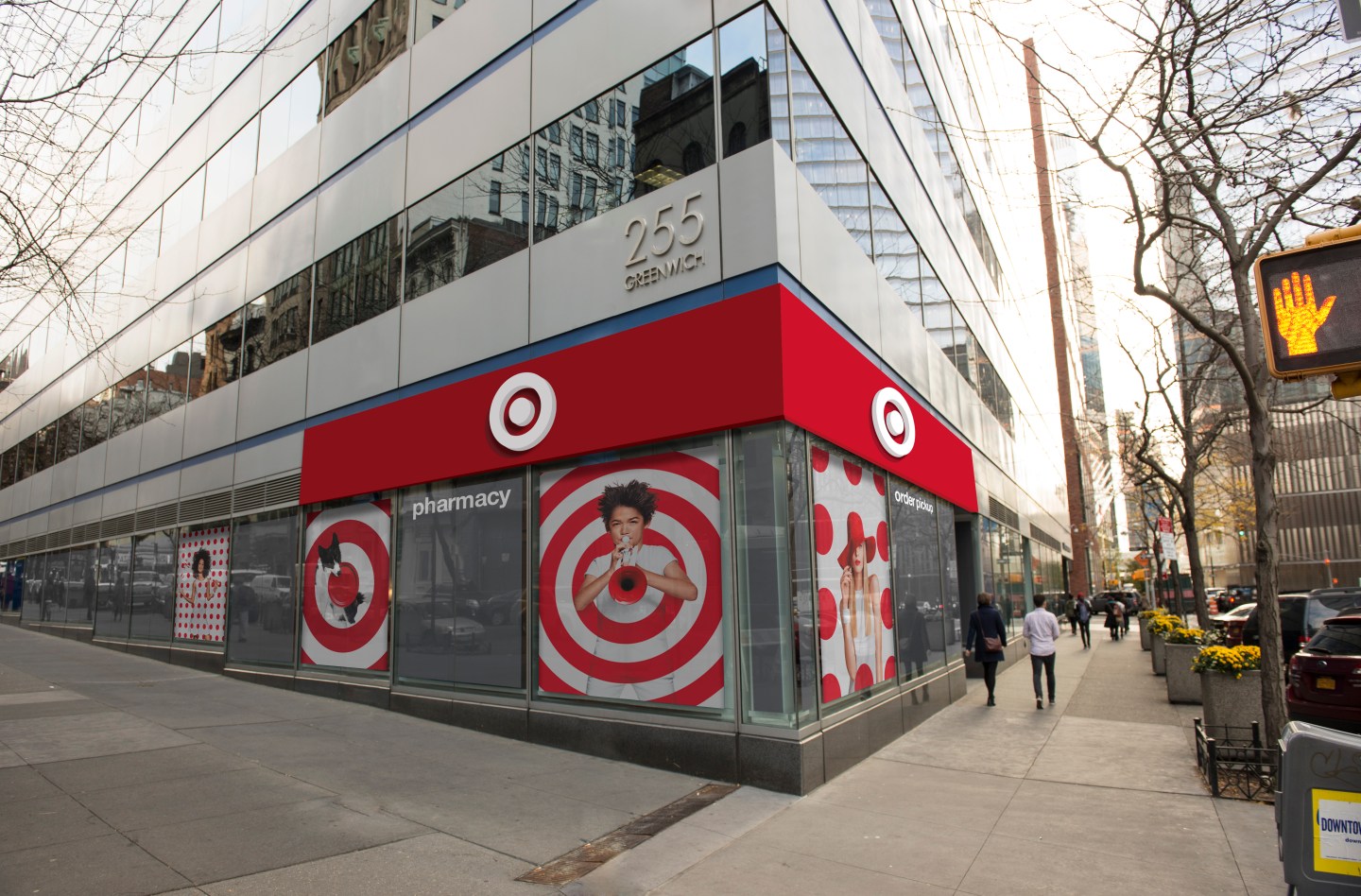 Rendering of the Target store planned for TriBeCa
Courtesy of Target

The retailer’s chain of small- or mid-size urban stores, aimed at winning over city dwellers or office workers who don’t want to go to its suburban big box locations, will open its first Manhattan location next year.

The store will be a two-level, 45,000 square-foot location (about the size of a larger Barnes & Noble, and a third of the size of a regular Target) in Manhattan’s trendy TriBeCa neighborhood, a foray into its densest market yet. The Target store will be at 255 Greenwich Street (at Murray Street), near the the Financial District and Battery Park, a fast-growing area teeming with affluent urban clientele, along with a healthy dollop of tourists visiting the nearby World Trade Center and 9/11 Memorial. According to U.S. Census data, the median annual household income in that zip code is $216,037, three times the Manhattan average.

“We’re thrilled we’re finally going to make it there,” Anne Stanchfield, Target’s vice president of flexible formats and localization, told Fortune in an exclusive interview. “This is the site we’re most excited about in terms of having a great neighborhood and a mix of tourists, office workers, and young families.”

The TriBeCa store will not be Target’s first New York City small format location: It is planning to open a previously announced Brooklyn store in 2016. And in Manhattan, Target has a big-box store in East Harlem, in addition to stores in other boroughs.

Much like the stores it has opened near Fenway Park in Boston and downtown San Francisco, the Manhattan location will have an assortment of products aimed at catering to local needs. For instance, at the Fenway store, Target offers locally brewed Samuel Adams beer. While Target is still refining its plans, the TriBeCa store will proportionally offer more grab-and-go food options for harried office workers, more organic foods for those finicky TriBeCans, and a lot of apparel. Target will adjust its home goods selection to fit smaller New York City homes.

Seeking to capitalize on what is a major hassle for the many New Yorkers whose buildings don’t have doormen to receive packages, the TriBeCa Target will be equipped for in-store pick-up of orders placed on target.com, allowing it to offer customers the same assortment they’d get in a big-box location (except for grocery items).

Target opened its first small format store in 2012 under the name City Target, and later opened even smaller stores which were formerly called Target Express.(This summer, Target dropped the Express moniker altogether and simply calls them Target stores.) It is currently operating 18 smaller locations. In 2016, including the TriBeCa store, it will add eight such stores and then another three the following year.

While this is a drop in the bucket compared to the size of Target’s big-box fleet of about 1,800 stores, following customers to the city is a top priority for Target under CEO Brian Cornell. Case in point? Of the 15 new stores Target announced for 2015, eight are smaller stores, or what Target now calls “flexible format” locations.

It’s easy to see why Target is pushing this format: Cornell told analysts earlier this year that comparable sales growth at such stores have consistently been in the mid-to-high single digit percentages. Target as a whole saw comparable sales rise 2.4% in the first half of current fiscal year. The smaller stores also generate higher sales per square foot. What’s more, the gross profit margins at these stores is about 10 percentage points greater than the company average.

And these stores have given Target access to a whole new cohort of shoppers.

“We really have been, over the last couple of years, developing flexible format stores to allow us to get into these areas that have traditionally been hard to get into with a big box,” says Stanchfield.