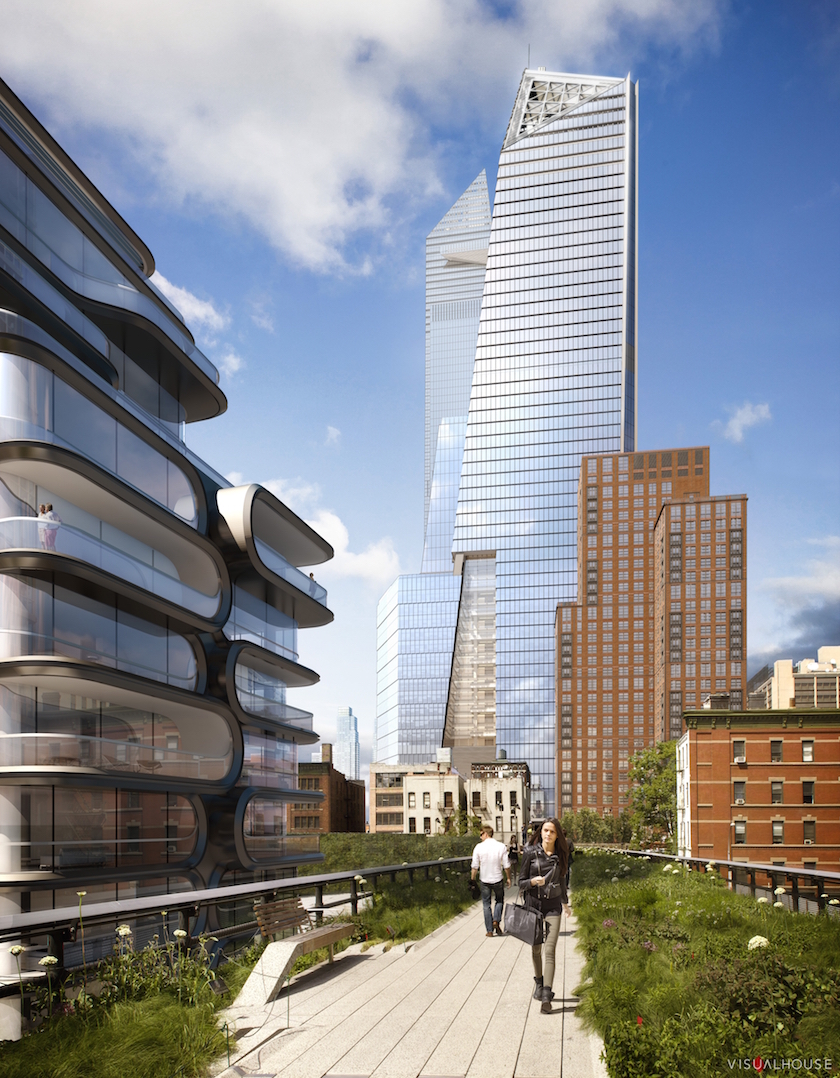 It’s the biggest trend in corporate office space, and it’s become something of a cliché: U.S. companies are moving from the traditional warrens of enclosed working areas to big, sunny spaces where managers are in the open at clusters of cubicles or rows of desks. Those airy floor plans are designed to foster collaboration and teamwork, to free people and ideas from their “silos,” and get insights flowing from all over the vast, buzzing column-free spaces.

Now, the Boston Consulting Group is creating a new dimension in avant-garde open office design. On November 12, BCG announced that it’s moving from its New York offices in midtown Manhattan and the Flatiron district to the colossal Hudson Yards development on the far West Side. BCG will join L’Oreal, SAP, and Coach in the 1.7 million square-foot tower at 10 Hudson Yards, at the corner of 10th Avenue and 30th Street. Hudson Yards is virtually a city within a city that’s attracting top corporate clients from outmoded digs in midtown and lower Manhattan. The 28-acre, 17 million square-foot development—rising on platforms mounted over the rail yards serving Penn Station—is the largest private real estate project in U.S. history. BCG’s new home, 10 Hudson Yards, already boasts commitments for around 95% of its 52 stories. And a second, 90-story office tower, 30 Hudson Yards, is also almost fully booked and will serve as the new corporate headquarters for Time Warner and KKR.

In part, Hudson Yards appealed to BCG because the consulting firm could work with an empty canvas and design an office space from scratch. When BCG’s more than 500 New York employees move in the fall of 2016, they will occupy the 42nd to 47th floors, covering 193,000 square feet that’s open, sunny, and free of obstructions. Right now, its main New York offices are in a Park Avenue building in midtown with the typical configuration of closed-door offices around the perimeter of each floor. “It’s an old-fashioned view of what a workplace is about,” says Ross Love, BCG’s managing partner for New York. “People were in the usual offices with windows, and the space has lots of columns. We wanted to create the office of the future, and that meant not the old shutting your door and working type environment, but big open spaces.”

Love quickly decided that BCG could relocate just about anywhere in Manhattan. His first thought was that the offices should be situated for the most convenient commuting. It turned out that BCG’s employees lived in such diverse places that no one spot was preferable to another. “We discovered that more people live in Brooklyn than anywhere else, just over 20%,” says Love. “But that means 80% live somewhere else. So we were free to choose any location.”

Love explored several options, including 4 World Trade Center, and traditional towers in midtown. For eight weeks in the summer, he conducted focus groups and work sessions with most of the New York employees to determine what they wanted. Instead of consulting only top managers and architects, Love asked his consultants to create a wish list for their ideal work environment. In effect, the BCG employees designed the new space for themselves. “People should be the author of their own space,” says Love.

The overall idea was to create a medley of spaces that serve wide-ranging needs for private time, team projects, and the standard rationale for open offices, lots of constructive chatting, taken in this case to a newly scientific level.

Each of the six floors will be divided into three “neighborhoods.” And each neighborhood will have a cluster of “sit or stand” desks, or “work stations.” Love reckons that around 150 of BCG’s more than 500 New York employees come to the office every day. The remainder, chiefly consultants, spend around half their time either traveling, working from home, or at a client location. So the mainly in-office folks will occupy their work stations permanently, while the more nomadic consultants will regularly change locations depending on the project and the team.

Each neighborhood will also have private rooms of around 100 square feet that consultants can book for time alone crunching numbers, organizing presentations, or just mulling broad strategies for clients. The neighborhoods also offer larger “case team” rooms, all equipped with video conferencing gear, where half-a-dozen consultants working on the same project can gather to shape their recommendations to clients. Linking the private and meeting rooms, and pods of work areas, will be lounges with where folks can work in comfort.

Consultants can also meet in hexagonal “venture rooms” equipped with touch screens and specifically designed for what BCG calls “accelerating incubation of businesses.” Its investment and incubation business, BCG Digital Ventures, will gather with clients in an “immersion room” surrounded by screens that display multiple prototypes of products that can be modified on the spot, and heat maps that show which department stores, in which locations, are ideal for launching the new offering.

The employees are even discouraged from taking elevators. Linking all six floors are broad staircases. BCG reckons that climbing and descending will keep the consultants fit; it also will provide treadmills at workstations, as well as showers. Hugging the staircases will be a “town hall” offering support services, everything from HR personnel to IT to document printing and delivery.

BCG wants to foster corridor-encounters, and Love is even applying metrics to predict how many such meetings the new configuration will create. Love estimates that in this environment, consultants will spend half their time in the office working alone, either in a private room, or at their workstation. Team meetings should account for another 25% of the day. The remaining fourth should be spent in more or less chance conversations. “We’re’ not talking about discussing the Knicks game over the weekend,” says Love. “Someone working on a sales force issue runs into someone who handled a similar assignment a few years ago, and learns from their experience.”

BCG’s new floor plan should raise what Love calls the “collision coefficient.” “The whole idea is to encourage as many collisions as you can in that amount of time,” he says. “You calculate how many you can create by designing the office space a certain way.”

Love says that their current midtown space breeds fewer than five encounters a day. “We want to double that,” he says. Who but a consultant would think in terms of “collision coefficients”?

No move was ever more finely calibrated, it seems, and if Love is right, sparks from those collisions should soon be flying at the BCG’s vast open spaces at Hudson Yards.