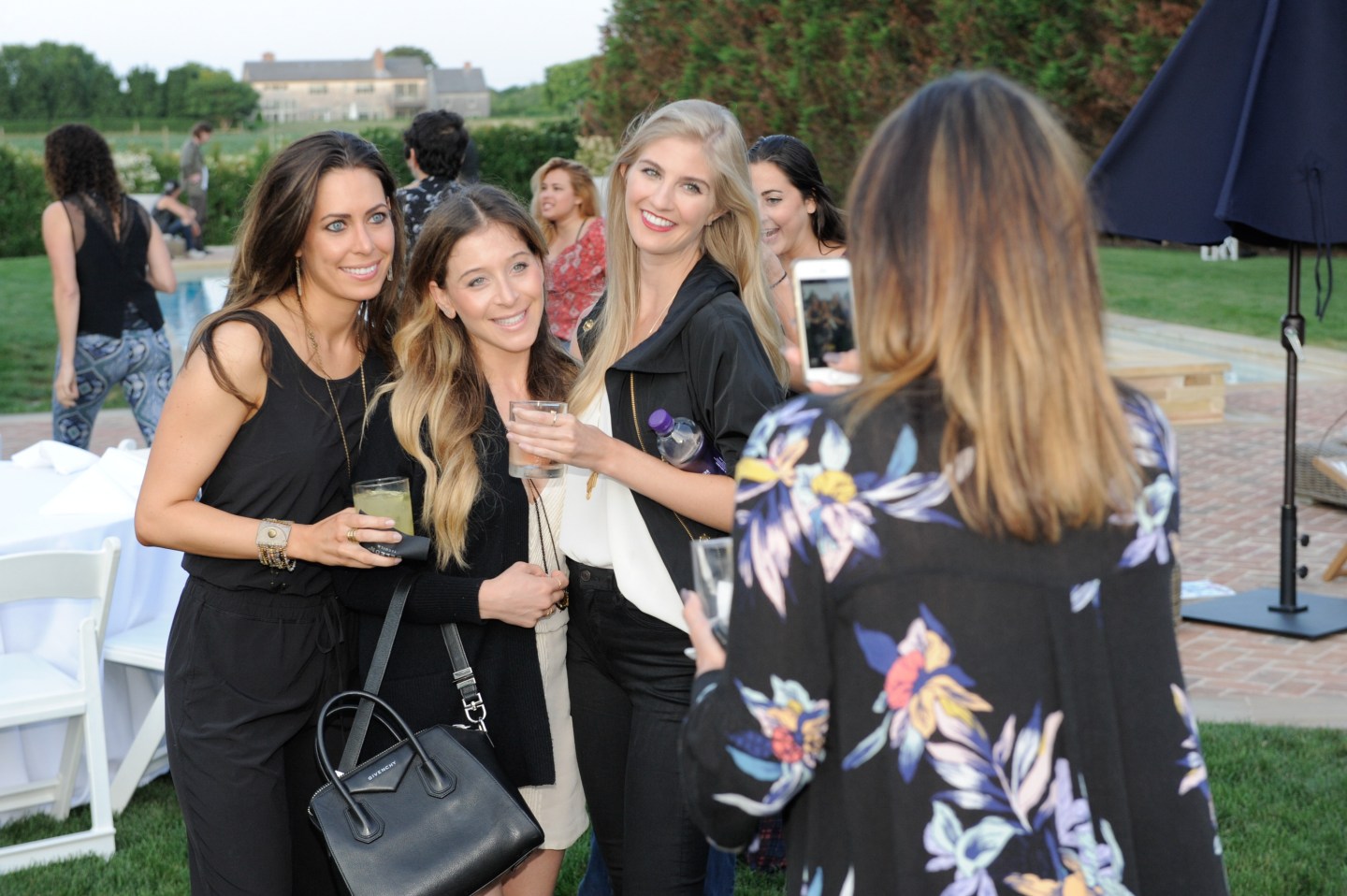 If you attend enough Hamptons house parties, they tend to blur together. At this one, held on a sunny afternoon at a whitewashed house with a pool (with gold and hot pink inflatable swan rafts drifting in it), there is fresh fruit and Champagne everywhere you turn. Beautiful women with flawless hair mill around, their dresses flowing (and their straw hats flapping) in the breeze. It’s the sort of carefully engineered scene that’s made to be Instagrammed. And, in case you forget the reason you’re there, giant foam letters floating on top of the still water in the pool spell out “REVOLVE”—the name of the host and, of course, the hashtag.

Revolve is a Los Angeles clothing company on track to sell $400 million worth of dresses, hats, and other trendy young women’s apparel this year. That’s a multiple of what e-commerce peer Nasty Gal pulls in, and more than British luxury site Farfetch, which investors recently valued at $1 billion. It’s more than twice as much as Jessica Alba’s Honest Company, valued at $1.7 billion, is predicted to earn this year. And Revolve is profitable, having grown more than 50% each year since 2012.

If you’ve never heard of Revolve, you probably don’t travel in the right circles. You aren’t a trendy twentysomething who can pull off a skintight white suit with no shirt underneath. There’s no copy of Gypset Style, the handbook for self-styled bon vivants and “high-low cultural nomads,” on your coffee table—one piece of the perfectly decorated apartment in which you barely spend time. (“Gypset” is a portmanteau of “gypsy” and “jet set.”)

But for its customers, who include not only the gypset set but those aspiring to it, Revolve has a cult status. Co-founders Michael Mente and Mike Karanikolas, known as “The Mikes” to the company’s 500 employees, have kept a low profile since they started the company more than a decade ago. They haven’t rallied tech blog hype or campaigned for South by Southwest keynote speeches. They rejected big, impressive-sounding piles of venture capital money.

Revolve doesn’t have a celebrity attached to its operations, like ShoeDazzle had with co-founder Kim Kardashian, or The Honest Company with Alba. And Revolve’s origin story, while full of twists and turns, doesn’t have the unconventional underdog narrative that Nasty Gal’s Sophia Amoroso benefitted from. Simply, the story of how two dot-com guys carved out a sizable chunk of the women’s apparel industry for themselves hasn’t been told. It’s a winding one that eschews the traditional routes to business success. Twelve years in, they’re just getting started.

Mente and Karanikolas always had the entrepreneurial bug, influenced by their entrepreneur fathers and the startup fever sweeping across the United States in 1999. Mente even dropped out of the entrepreneurship program at University of Southern California a year early to join NextStrat, a software company based in nearby Newport Beach. There was one tiny issue, though: Mente and Karanikolas were late to the party. The dot-com bubble burst shortly after they joined NextStrat, leaving them to watch the venture capital-fueled technology companies collapse around them. NextStrat eventually went bankrupt and its assets were sold.

Reeling from the experience, the Mikes swore off growth fueled by venture capital. They didn’t want to gamble on another high-risk company. “Chasing revenue and growth without really understanding the guts of the business is something that venture capital will push you to do,” Mente says. “We didn’t want to be at risk.”

As the pair contemplated their next endeavor, they became fascinated by trends in online search. It was easy to see what people were searching for on the Internet—and more importantly, when those people weren’t finding what they wanted. It was especially apparent for designer denim. Mente noticed that high-end designer jeans had taken over his hometown of Los Angeles, but local brands like 7 for All Mankind (VFC) weren’t sold online. “This is a high-ticket item that thousands of people are searching for, and you could literally only find four to six pairs online,” he says.

So they began knocking on the doors of showrooms with their business plan in hand, asking designers to let them sell their jeans online. The big brands turned them down at first—7 for all Mankind came on board after two years of pitching—so they sold new and emerging designers. “It was networking and hustling for access for many years,” Mente says. But it worked. By 2007, Revolve carried more than 1,000 brands.

Even though the Mikes knew little about the fashion business, they knew customers wanted choice and selection online. Revolve offered free shipping and returns, a strategy pioneered by Zappos. But Mente and Karanikolas realized their early success—and the designer denim trend—wouldn’t last forever. “We knew other retailers would catch onto free shipping and returns and things like selection,” Mente says. “We knew designer denim would become a commodity.” Their young, trendsetting customer wanted to buy premium merchandise online. Revolve just needed to learn how to spot the next big trend.

So the Mikes figured out exactly who their customer was: a fashionable woman between the ages of 20 and 40 who has social media savvy and plenty of occasions to get dressed up and go out. She lives that slightly paradoxical L.A. lifestyle where eating healthy and going to yoga intersects with drinking cocktails and staying out late at the club.

Mente and Karanikolas hired those young women as interns, and quickly learned the interns were better at predicting trends than experienced retail executives from big department stores or specialty boutiques. This was especially true when it came to emerging trends, or up-and-coming brands that had no track record. So they promoted Lauren Yerkes, the company’s divisional merchandise manager, buyer Candace Lee and buyer April Koza, among others. All started as interns. “I don’t even remember the last time I went to a mall and shopped,” Yerkes says. “You become the Revolve girl. Everyone in the office is wearing Revolve head to toe.”

As Revolve grew, the Mikes learned the importance of staying ahead of trends. “Riding a trend all the way down,” as Mente calls it, works in the short term, but can damage the brand over time. Take the dreaded Juicy Couture velour tracksuit. No single article of clothing could better symbolize the style of the mid-2000s. At the time, Revolve was selling a lot of them. (“And selling them and selling them and selling them,” Mente says.) But it eventually became clear that the orders were no longer coming from Revolve’s core customer. “It was the late adopters, the latest adopters, and not the people who are going to keep coming back to us and be our long-term customers,” he says.

Now, when a trend hits, Revolve abandons it the minute it goes mass market. Last year, when the company’s competitors were discounting their wedge sneakers because they had excess inventory, Revolve was already selling studded boots. “If you ride a trend too far, it’s hard to get the customer back,” Mente says.

In just a few years, Revolve had turned the Mikes’ $50,000 nest egg into a profitable business with $100 million in sales. The lack of outside capital forced the company to be practical and disciplined. But it also left little room for error. When the global financial crisis struck in 2008, sales tanked by 40% almost overnight, Mente says. The company lost money that year. It had planned and purchased supply for the next six months of assumptions, but those quickly changed. Revolve had no cash cushion. “We were really backs against the wall and at the point of insolvency,” Mente says.

The Mikes spent 2009 barely keeping the business afloat. There were layoffs. Sales shrunk that year, but the company managed to turn a profit. When growth slowly crept back in 2010, a lot of Revolve’s competition, including boutiques like Adasa and Go Clothing, had been wiped out. Mente and Karanikolas were scared to buy inventory. “We were trigger shy,” Mente says. “Customers were like, ‘I love you guys, but everything is out of stock.’”

It became clear that if Revolve wanted to to invest in future growth and survive any more downturns, its co-founders needed a safety net. They met with 20 venture capitalists in Silicon Valley—”the same guys that were interested in Nasty Gal,” Mente says—but even a decade after the dot-com bubble, the risk profile of venture capital didn’t feel right.

“We’re trying to build a business for the long term that we wanted to own forever,” Mente says. “They didn’t understand that this is not a ‘go big or go home’ tech business.” Besides, venture investors have a portfolio of companies, and they only need one or two to be a huge hit. “For us, if we messed this up, we would literally have nothing,” Mente says.

Revolve eventually discovered private equity, which doesn’t have venture capital’s mandate for triple-digit growth. TSG Consumer Partners invested $50 million in the company in 2012. It was the firm’s first pure-play e-commerce deal. (Jennifer Baxter Moser, a TSG partner, was a Revolve customer herself.) It’s rare to find a company of Revolve’s size with no prior institutional investors, but Revolve is unusual in a lot of ways. “They’re approaching it their own way because they don’t have a lot of traditional business influences,” Moser says. Since the TSG investment, Revolve’s sales growth has accelerated from around 25% a year to more than 50% a year.

Not all of the designers in Revolve’s supply chain can handle that kind of trajectory. A few years ago, one of the company’s top designers suddenly went out of business, leaving Revolve scrambling to meet customer demand. So in March, Revolve acquired its top vendor, Alliance Apparel Group, which owns the brands Lovers & Friends, Tularosa, and NBD. The plan is to support the brands on the business side with sales data and inventory advice, “versus just showing up at the showroom and buying what we like,” Mente says. If fringed skirts are selling like crazy and there are only five options from all of Revolve’s suppliers, the company can ask Lovers & Friends to develop more in a range of price points and colors, for example. The brands do wholesale business with other retailers as well.

Revolve is also expanding to work with high end designer brands like Saint Laurent, Givenchy, and Alexander Wang through Forward, its luxury vertical. With average sale prices that are three times that of the Revolve brand, Forward has grown to represent 20% of the company’s revenue.

Beyond that, Revolve’s men’s business, which makes up 5% of sales, is growing by 50% each year. International sales, which comprise 20% of the business, are thriving, especially in China.

The Mikes believe Revolve can be a billion-dollar business in the next four or five years. Not a unicorn startup with a $1 billion valuation, mind you—a business with $1 billion in actual sales. They’re less fixated on their company’s valuation, stemming from their general wariness of venture capital hype. “It’s a gift and a curse,” Mente says. “We’ve been around long enough to see more of [the highly valued startups] fail than succeed.”

Mente is proudest that he created 500 jobs in Cerritos, the quiet, out-of-the-way L.A. suburb he grew up in, where Revolve is headquartered. A photo of his Little League baseball team hangs on the wall of the burger place down the street. It’s a far cry from champagne and gold swan floaties in the Hamptons, but it’s exactly the way he wants it. “It grounds us,” he says. “We will be big, but we’re not fancy.”

Update: This story has been corrected to note that TSG first invested in Revolve in 2012, not 2014.