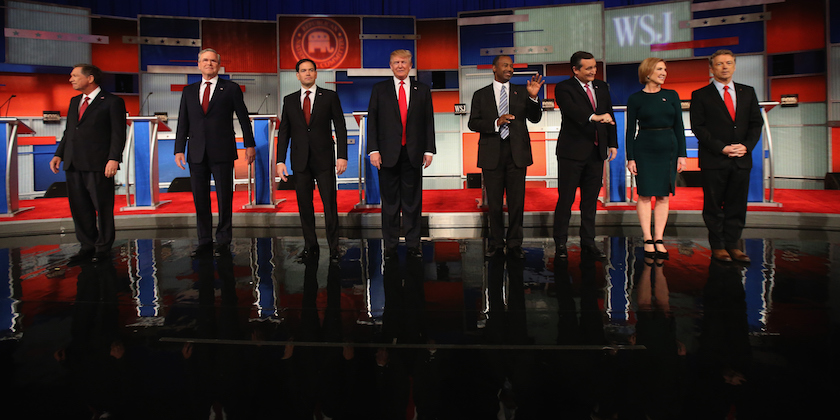 Marco Rubio can thank Barack Obama for his strong debate performance last night. And not just for providing a ready foil for the Florida Republican’s attacks on Democratic policies.

Rubio — like Obama in 2008, a freshman Senator running for the White House on a message of generational change — borrowed, ahem, liberally from the president he aims to replace in making his case at the Fox Business News debate.

Rubio’s mirroring of Obama was stylistic rather than substantive — but striking nonetheless.

Part of the cribbing was rhetorical. In seeking to make his youth an asset, the 44-year-old framed the election as a contest between an entrenched, tired establishment and a new vision of the future — offered, of course, by him. “This nation is going to turn the page,” he said, “and that’s what this election should be about…. If I am our nominee, they will be the party of the past, we will be the party of the 21st century.”

There, Rubio implicitly previewed the showdown with the likeliest Democratic nominee, former Secretary of State Hillary Clinton. But he’s also used the need to “turn the page” to dismiss familiar names within his own party, specifically his former mentor and governor, Jeb Bush. “It’s not about him,” Rubio told Sean Hannity on Fox News last month. “I’m not running against him or anybody else in this field. I’m running for president, and I honestly thing we need to turn the page as a party.”

Obama made the phrase a staple of his initially long-shot challenge to Clinton in the 2008 Democratic presidential primary. Announcing his candidacy on the steps of the Old State Capitol in Springfield, Illinois, back in February 2007, then-Sen. Obama presented himself as a leader who could transfigure the “smallness of our politics… It’s time to turn the page,” he said. It became a go-to in his stump speeches. And that October, squaring off in their 14th debate, Clinton appropriated it to describe the urgency of replacing then-President George W. Bush. Obama snatched it right back to critique the secrecy guarding her husband’s presidential papers: “I’m glad that Hillary took the phrase ‘turn the page,’” Obama said. “It’s a good one. But this is an example of not turning the page.”

Obama has made frequent, prominent use of the phrase ever since, including in his most recent State of the Union address — declaring that “15 years into this new century,” (and six into his presidency), through two wars and a recession, finally, “tonight, we turn the page.”

The president’s refusal to relinquish a phrase that might have passed its sell-date for him long ago evidently doesn’t preclude Rubio from taking it up himself. But it underlines a line of attack that more experienced Republicans are already deploying against him — that Obama’s presidency demonstrates the perils of appointing an inexperienced Senator to the most powerful post in the world. Ohio Gov. John Kasich made the case, albeit without naming Rubio, in Tuesday’s debate: “I gotta tell you, on-the-job training for president of the United States doesn’t work,” he said. “We’ve done it for 8 years, — and almost 8 years now. It does not work.”

Yet in a Republican contest that’s so far viewed political experience as more of a liability than an asset, it’s hardly clear how effective the criticism can be. And Rubio has mastered another Obama-like piece of jujitsu to deflect it — refocusing the conversation away from himself and onto struggling Americans. That may seem like pretty basic stuff, but in a debate that saw one-time frontrunner Donald Trump respond to a question about raising the minimum wage by decrying that wages are in fact “too high,” neither can it be taken for granted.

Rubio had his most effective moment of the night defending his tax plan in a confrontation with Kentucky Sen. Rand Paul. The proposal includes a new $2,500 child tax credit, which Paul called a trillion-dollar “welfare transfer payment.” But Rubio knows that, conservative principles notwithstanding, the green-eyeshade routine doesn’t play well with families burdened by stagnant wages and anxious for a break. “Here’s what I don’t understand: If you invest that money in a piece of equipment, if you invest that money in a business, you get to write it off your taxes,” Rubio said. “But if you invest it in your children, in the future of America and strengthening your family, we’re not going to recognize that in our tax code? The family is the most important institution in society.”

The empathy that ran through his answer was on rare display on the debate stage. To understand why that quality matters, consider the 2012 presidential election. Mitt Romney beat Obama among three categories of voters — those who wanted a leader with a vision for the future, projected strength, and shared their values. But in a fourth category — those who wanted a leader who “cares about people like me” — Obama crushed Romney, 81-18. That so-called empathy gap is one way to understand how Obama won reelection after successfully tarring his opponent as a candidate by the rich, for the rich.

Rubio, if he emerges as the GOP nominee, will face charges from Democrats that his proposals do no more than Romney’s to boost middling incomes while disproportionately distributing gains to the wealthy. Already, the tax plan he was defending on Tuesday has come under criticism from the left for costing roughly $12 trillion over ten years and distributing more than a third of its cuts to the top one percent. How he responds could test the limits of Obama’s playbook.