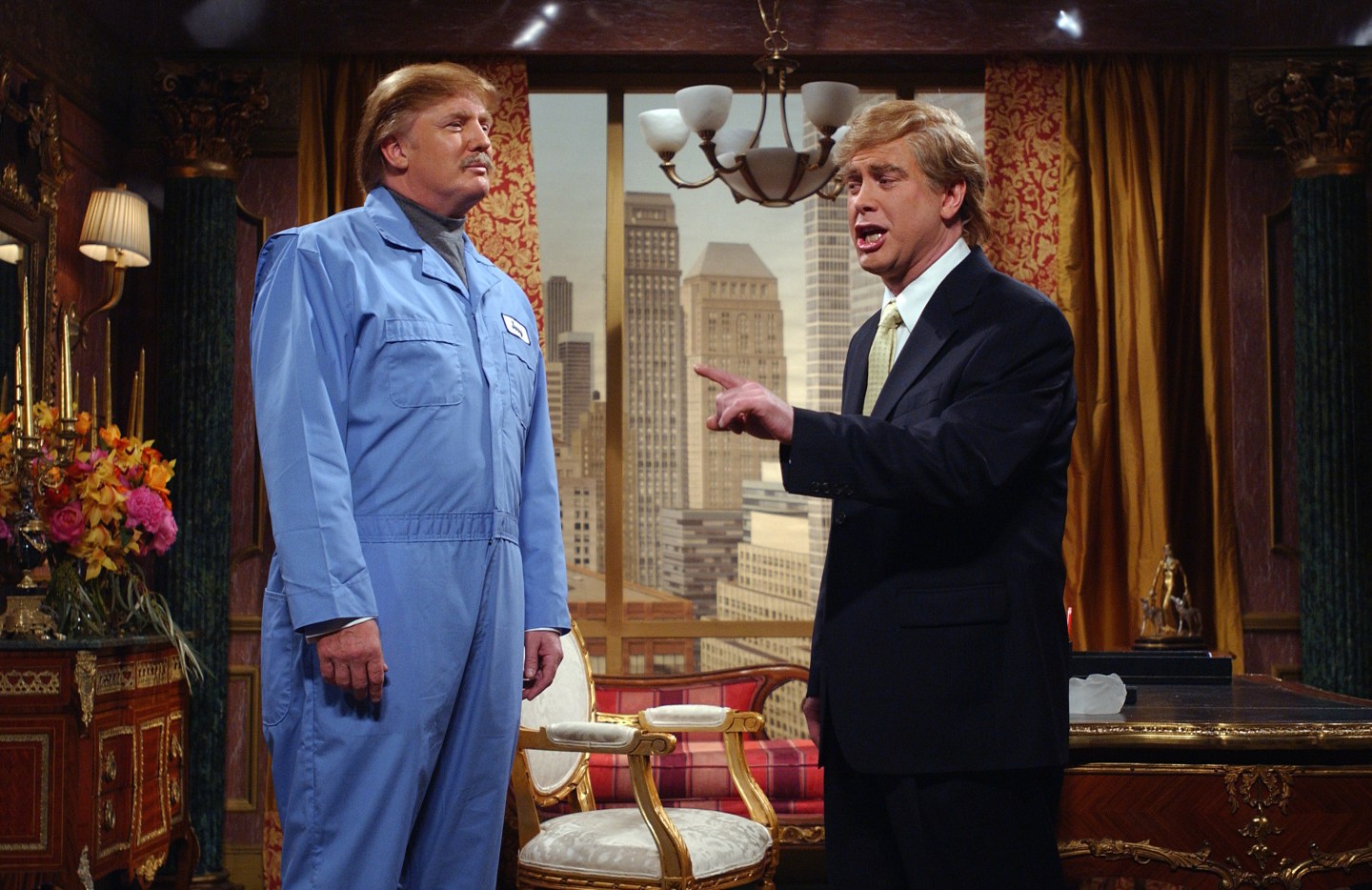 This weekend, Donald Trump will try to make America laugh . . . with him.

The billionaire businessman turned politician is hosting Saturday Night Live, the late-night comedy institution that has welcomed countless politicians onstage in its 40-year history. Trump himself previously hosted the show in 2004, back when he was a reality television star on The Apprentice (which also aired on NBC, the network home of SNL).

Not surprisingly, Trump’s hosting gig comes with its fair share of controversy, including angering a number of Latino groups and civil rights activists who are protesting what they view as NBC’s tacit endorsement of a candidate who’s frequently disparaged Mexicans since the start of his campaign and has often questioned President Barack Obama’s birthplace.

NBC previously tried to distance itself from Trump following his disparaging comments, but the network seems to have moved on at this point, with Trump now a welcome guest on SNL after previously yukking it up on Jimmy Fallon’s Tonight Show in September. The Tonight Show appearance was a huge ratings win for NBC and the network presumably saw further potential for a huge viewer turnout by giving Trump 90 late-night minutes with which to work a few months before the Iowa caucuses.

For Trump, the appearance is an opportunity to show voters he’s down to earth enough to take a joke. That’s always been the primary reason so many politicians find themselves onstage at SNL’s Studio 8H—along with the extra television exposure, of course.

In the past, presidential candidates have popped up on SNL in brief, surprise cameos—long enough to get in a few good gags, sometimes while interacting with their own impersonator, but not so long as to risk overexposing, or even embarrassing, themselves.

But the precedent for a presidential candidate actually hosting SNL is extremely small and mostly limited to candidates who trailed heavily in the polls before ultimately ducking out of the race without their party’s nomination.

Republican Gerald Ford had the honor of being both the first President ever impersonated on Saturday Night Live and also the first to appear on the show. He wasn’t technically actively campaigning when he appeared on the show in April 1976, but Ford was certainly expected to run for another term after taking over for Richard Nixon a couple of years earlier. He would lose the election to Jimmy Carter only seven months later, but he still got to make SNL history as he tried to show he wasn’t bothered by Chevy Chase’s klutzy impersonation of him. (And, apparently, he wasn’t, since Ford and Chase later became friends.)

Steve Forbes delivers a monologue as host of Saturday Night Live in 1996.

Magazine family scion Steve Forbes is one of the few candidates to actually host SNL while running an active campaign, paving the way for Trump's gig. His performance in 1996 was widely panned as wooden with the Republican candidate not displaying the best comic timing. It would seem that Forbes didn’t win over too many voters by hosting the show, as he came up well short of a Republican nomination that went to Bob Dole. And, Forbes definitely didn’t make fans out of the show’s musical guest, rockers Rage Against the Machine, who attempted to protest Forbes’ hosting gig by inverting U.S. Flags on their amplifiers, which led the show’s producers to cut their performance from the normal two songs to just one.

Al Sharpton and Tracy Morgan on Saturday Night Live, in 2003.

Aside from Forbes and soon Trump, the Rev. Al Sharpton is the only other person to host SNL while mounting an active presidential campaign. Sharpton hosted the show in late-2003 when he was vying to be the Democratic presidential nominee. Sharpton joked around with former SNL cast member Tracy Morgan (dressed in a tracksuit as a younger version of Sharpton) and acted in a sketch about the three wise men, but the shtick didn't win over enough voters. Sharpton withdrew from the race a few months later and endorsed eventual Democratic nominee John Kerry.

Our current President showed up for a surprise appearance in a cold open sketch as a guest at a Halloween party hosted by Hillary Clinton (as portrayed by Amy Poehler). Obama, who was then vying against Clinton for the Democratic nomination, pulled off a mask with his own likeness to reveal it was actually him underneath. When asked why he dressed as himself for the party, Obama said in the sketch: "I'm not going to change who I am just because it's Halloween."

Obama was reportedly set for a follow-up appearance the following year, a few months before he was elected president, but that idea was nixed with Hurricane Ike set to strike the U.S.

Huckabee, then the governor of Arkansas, appeared on SNL's Weekend Update in February 2008. Eventual Republican nominee John McCain had just declared himself the party's choice to run for President, but Huckabee had yet to drop out of the race after winning the Iowa caucus a month earlier and picking up a couple of other states in February's primary elections. The ultra-conservative Huckabee wouldn't officially drop out of the race for another month despite being mathematically eliminated from contention. "I'm not a math guy," he quipped to SNL's Seth Myers.

John McCain and Tina Fey on Saturday Night Live, in 2008.

John McCain hosted the show in 2002 as a member of the Senate after previously losing to George W. Bush in the 2000 Republican primary. He then appeared on the show in November, 2008, just days before losing to Obama in the general election. In the show’s cold open skit, McCain and Tina Fey (portraying running mate Sarah Palin) pretended to sell items from his presidential campaign on QVC while joking about the campaign running out of money. "I'm a true maverick," McCain said. "A Republican without money."

Huntsman also used Weekend Update as a forum to discuss his presidential candidacy when he appeared on SNL, in 2011. The Republican governor from Utah talked optimistically about his low polling numbers, telling Seth Myers, "Only a few months ago, I was polling at 'margin of error' so to have any digit at all is a pretty big deal." Huntsman dropped out of the race two months later.

Later on in the heated Democratic primary, Clinton made her own appearance on SNL in a sketch that put her directly opposite Poehler's impersonation of her. The two women wore matching pantsuits and Poehler gave an exaggerated impression of Clinton's laugh, prompting the then-Senator to ask "Do I really laugh like that?"

Of course, Clinton eventually lost her party's nomination to Obama before serving a term as Secretary of State. With Clinton again trying to cut a path to the White House, she recently found her way back to SNL for a sketch that aired last month. Clinton showed up as "Val," a bartender who comforts current cast member Kate McKinnon (playing Clinton), who is tired from nonstop campaigning. Clinton also used the appearance to poke fun at Trump, quipping, "Isn't he the one that's like, 'Ugh, you're all losers!'?"