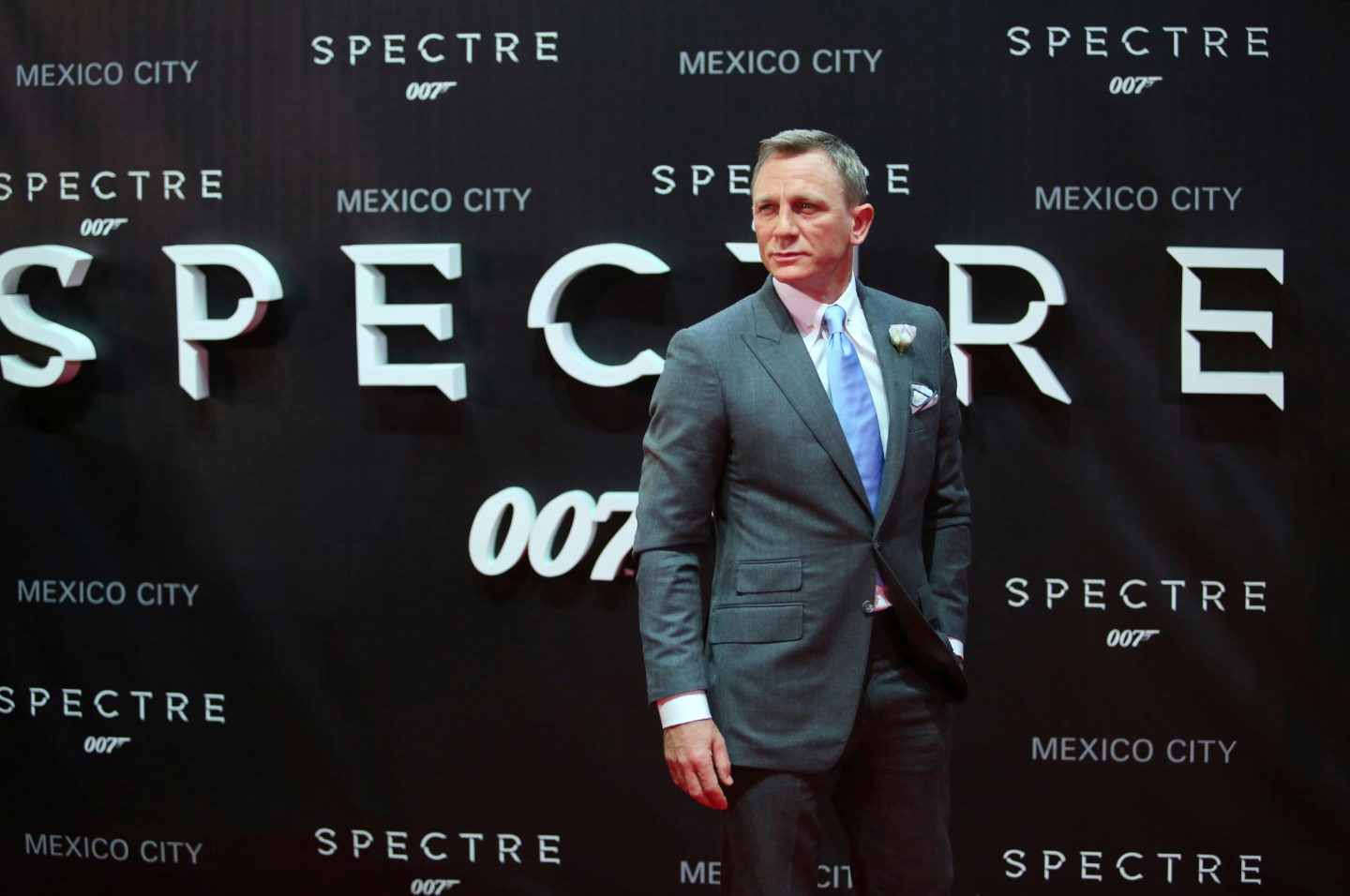 When Sony Pictures employees booted up their computers a year ago, scowling skulls and the audio-recorded ratatatat of submachine gun fire announced that their IT systems had been gutted. So unfolded the movie studio’s colossal hacking. (Read Fortune’s epic three-part investigation into that fiasco here, here, and here.)

When the screen lit up inside the seventh floor theater of Sony’s (SNE) New York headquarters on Wednesday night for an advance viewing of the latest James Bond adventure, the scene revealed a skeleton-scattered landscape—a raucous Día de Muertos fiesta in Mexico City—followed, eventually, by the pewpewpew of an assassin’s semi-automatic rifle. So opened Sony-made Spectre, the twenty-fourth installment of the secret agent series.

Perhaps one would be mistaken to read too much into the coincidental display of bones and bullets in Sony’s digital ransacking and the Bond movie’s prelude. Hackers had leaked a version of the script already containing these plot points in the course of their vandalism. So the stagecraft might just be a harmonious accident.

The film does grapple, however, with questions of cybersecurity, data privacy, and government authority. One would not be mistaken then, in reading the story as a serendipitous commentary on very real legislative initiatives under review in the United Kingdom at this very moment. A draft bill wending its way through the parliament, for instance, proposes to grant intelligence agencies and law enforcement officials sweeping surveillance powers within the country. To anyone who sees the film, this may sound familiar.

Rest assured, I won’t spoil what happens in the spy’s fictional universe, but I will reiterate the exasperated advice of many a cybersecurity expert: Building backdoors into people’s private communications is a bad practice. Villains will find ways to exploit this access just as much as the supposed good guys can. (Side note: if you’re looking to read more on proposed cybersecurity laws, keep an eye out for the next issue of Fortune magazine, where I plan to have the download on a U.S. cybersecurity bill called CISA that recently passed in the Senate.)

To return to Spectre, the film is exceptionally entertaining, though the plot leaves something to be desired. The story often feels disjointed—leaping from country to country on a dizzying world tour. An attempt on the part of the screenwriters to tie the narrative strings together on the Daniel Craig-acted Bond series resembles a knotty threadbare tangle. But the glamorous aspects of “007” espionage are as enthralling as ever—the car chases, the helicopter fights, the explosions, the seduction, and yes, the martinis.

My review can be summarized thusly: I was shaken, not stirred. (At least in comparison to Skyfall.)

For more on Sony’s epic cyber walloping, watch the video below.