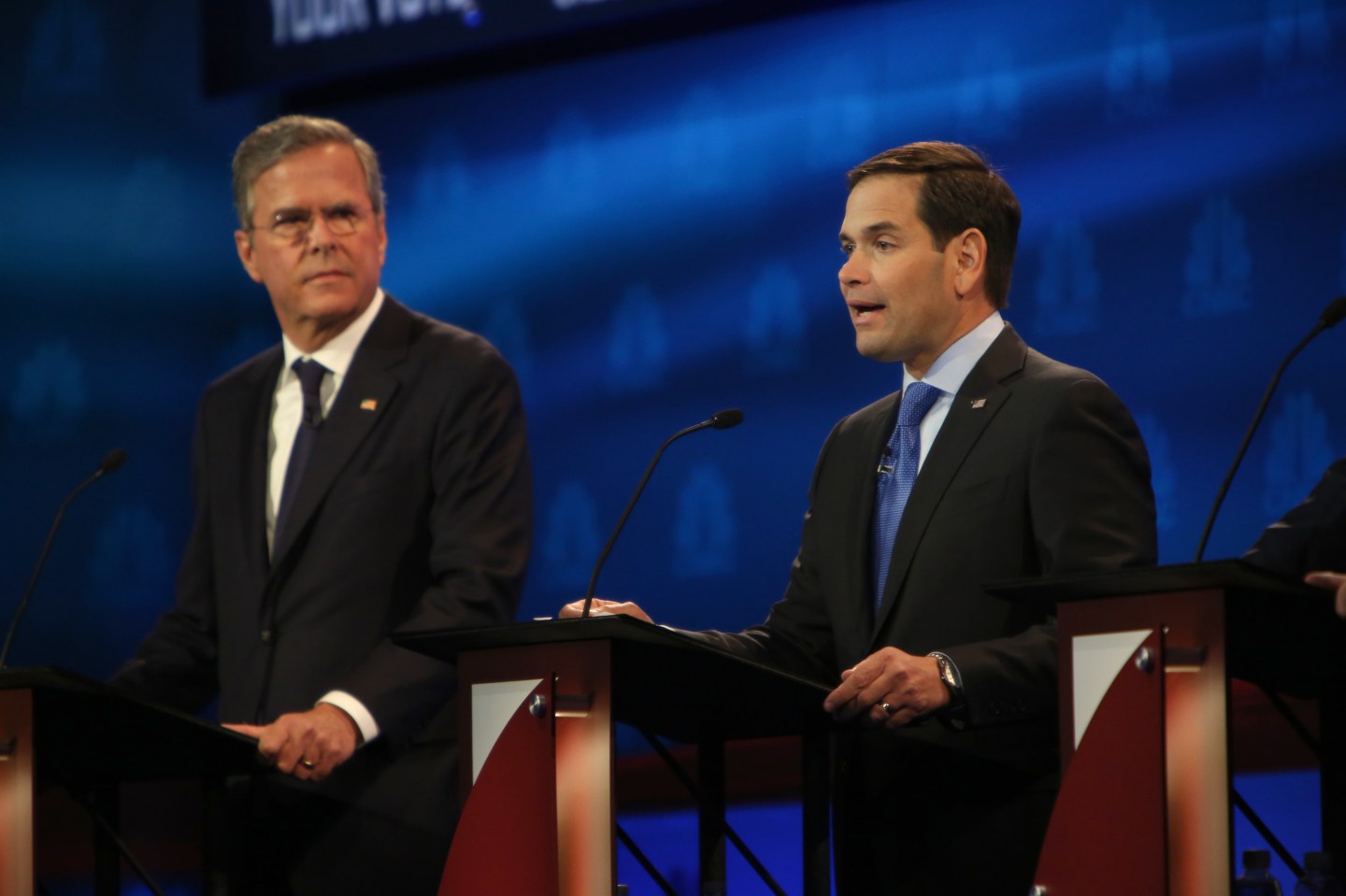 This week in presidential politics, the protege eclipsed his mentor. After Jeb Bush flopped last week in his showdown with Sen. Marco Rubio during the CNBC GOP debate, the two Floridians’ fortunes headed in sharply different directions in national and key state polls, fundraising, and endorsements.

Bush, who once led the campaign and built a formidable fundraising operation before the Summer of Donald Trump, has since stumbled badly, managing an abysmal 4% in the latest Fox News and Quinnipiac polls, both taken after the debate.

Perhaps even more troubling for the campaign, the former Florida governor is getting smoked in a poll in his home state, registering just 7% support among Republican primary voters, good for a distant fifth place, 30 points behind Trump and 9 points behind Rubio.

“FYI political press corps. Jeb’s going to have a few weeks of bad polls. Comebacks take time, we recognize and are prepared for that,” he said.

But Bush’s troubles and Rubio’s stellar performances both in debates and on the stump have establishment Republicans gravitating to the Florida senator, who has far better favorability ratings in each of the national polls than Bush and isn’t weighed down with family baggage from the George W. Bush administration. Three senators announced their support for Rubio this week — Cory Gardner of Colorado, Steve Daines of Montana and Jim Risch of Idaho — coming on the heels of his pickup of billionaire GOP mega-donor Paul Singer.

Bush, meanwhile, has faced nonstop questions about how he’ll mount a comeback after he slashed his campaign payroll and amid reports that he has had to reassure donors that he can right the ship.

And while Bush has expressed hope he’ll be able to come back and win in New Hampshire, two polls this week showed him mired in sixth place in the state, with just 7% of the vote.

Both a WBUR poll, and a Monmouth University poll found him well behind Trump, Ben Carson, the surging Rubio, and Ohio Gov. John Kasich.

In the WBUR poll, Bush even trailed New Jersey Gov. Chris Christie, who many pundits had presumed all-but-dead after the Bridgegate scandal but has proven feisty in the debates and is still drawing crowds in person. In the Monmouth poll, he trailed Sen. Ted Cruz of Texas.

For now, Trump and Carson continue to dominate, garnering 26% and 23%, respectively, in the Fox News poll. Rubio and Cruz are the only other officials in double digits at 11% each, with Rubio a favorite particularly among establishment Republicans and Cruz tapping into the anti-establishment wing of the party.

No one else comes close. Kasich, Bush, Arkansas Gov. Mike Huckabee, and Sen. Rand Paul of Kentucky were all tied at 4%.

Bush isn’t the only one tumbling. Former HP CEO Carly Fiorina has come crashing back to earth after a short-lived surge following a couple of stellar debate performances of her own. She scored just 3% in the Fox poll, back with a group of candidates at the bottom of the heap.

The Republican primary B-team can keep up the hope of victory because no single candidate so far has sufficiently broken out of the pack. The electorate remains unsettled with just less than three months to go before the Feb. 1 Iowa caucus. And each of the frontrunners has weak points:

While Trump has stayed in the lead in most polls, his momentum has stalled, and he remains a polarizing figure with some of the highest negative ratings of any candidate.

Rubio still faces strong opposition among some parts of the GOP base because of his role with the Gang of Eight Senate immigration bill two years ago.

Cruz sometimes touts his record of fighting for conservative principles but is so unpopular inside the Senate he can’t even garner enough seconds to get his amendments voted on.

And neither Trump nor Carson has won significant endorsements or major pieces of the party’s establishment, which in past elections have been important predictors of the party’s eventual nominee.

But then again, maybe this year is different.