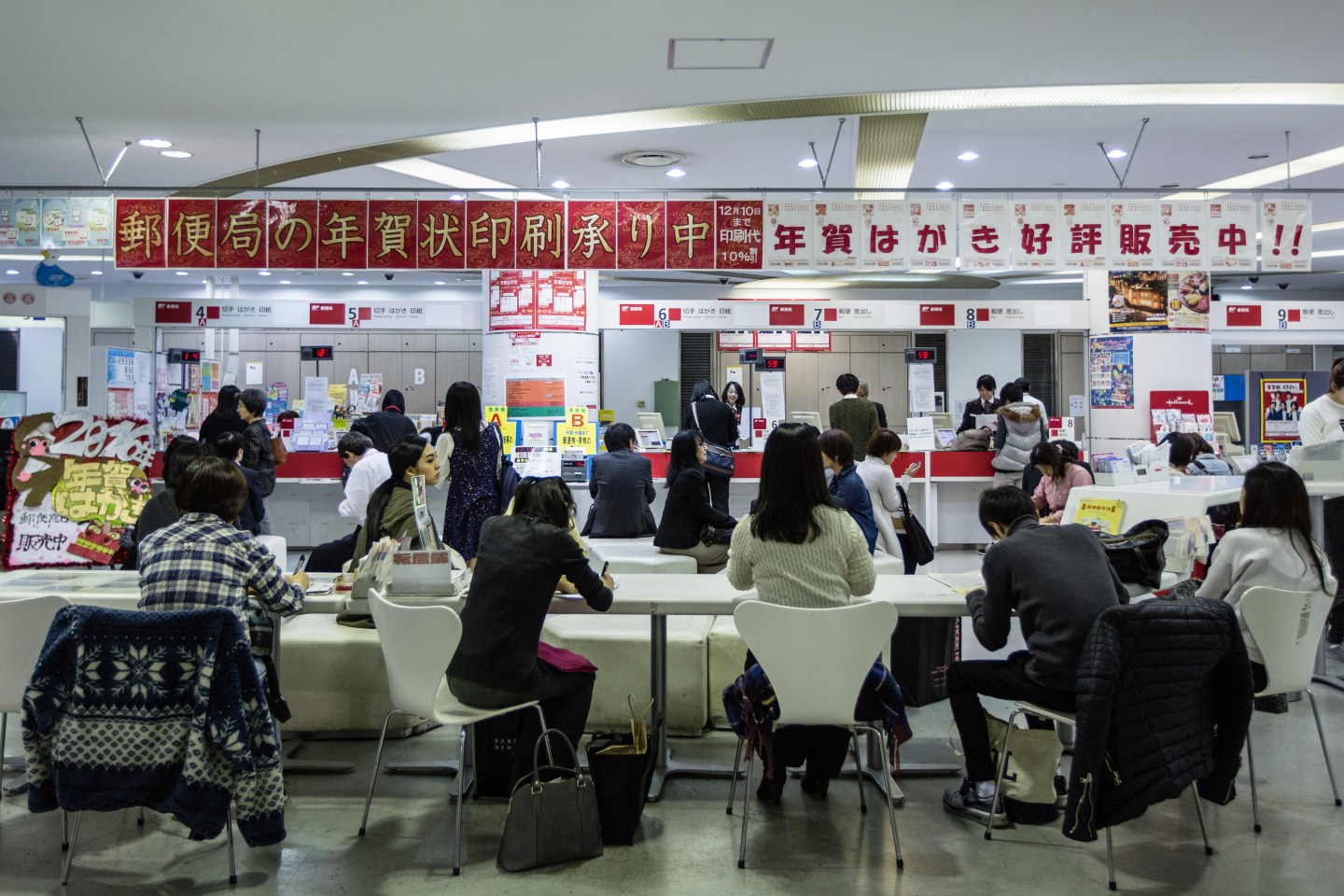 TOKYO, JAPAN - NOVEMBER 04: Customers wait to be called by a Japan Post Co employee at a busy Japan Post Co. office in downtown Tokyo on November 4, 2015 in Tokyo, Japan. Shares in Japan Post with its banking and insurance units started trading in Tokyo on November 4, 2015 after an initial public offering that marked 1.4 trillion yen. (Photo by Christopher Jue/Getty Images)
Photograph by Christopher Jue—Getty Images

Japan Post and its financial units posted a sizzling trading debut, as investors rushed to buy up stock in the world’s biggest IPO this year.

Shares in the parent company Japan Post Holdings closed around 26% higher than the initial public offering price of 1,630 yen at the close of trading in Tokyo Wednesday. Its other two listed units—Japan Post Bank and Japan Post Insurance—closed up 15% and 56%, respectively.

The Japanese IPO was the biggest in the world this year and the largest since Alibaba’s (BABA) record $25 billion debut in 2014.

The Japan Post IPO marks an encouraging culmination of a 10-year privatization plan of Japan’s postal institution by the government, and the $12 billion it has raised from the IPO is the year’s biggest so far (it’s also the largest IPO since Alibaba raised $24 billion in September 2014). Combined, the three entities have a first-day market cap of around 13 million yen ($107 billion).

Eighty percent of the shares were allotted to domestic investors, and a combination of the strong local brand name and comparatively higher dividend yield led to a bull rush for the stock.

“There’s a carnival atmosphere in the market,” Mitsushige Akino, executive officer at Ichiyoshi Asset Management in Tokyo, told Bloomberg. “Individual investors who couldn’t purchase the shares during the bookbuilding process are trying to get hold of them now. The prices were relatively cheap and the dividend yields are high.”

The three-pronged listing—you can read more about Japan’s beloved three-headed Godzilla here—was also a way for Prime Minister Shinzo Abe to get Japanese citizens invest more of their savings into the stock market. It is oft-cited that the Japanese have around 14 trillion yen put aside in savings accounts, and some of that money reinvested into the economy could help pull the country out of its period of secular stagnation.

However, this marks the first step in a number of challenges for Japan Post Holdings. It must upkeep its profits in the long-term, and the IPO was also seen as a way to give free market advocates more momentum to lobby for previous restrictions over the banking side to make mortgage loans to be removed.