How a Carnegie Mellon Professor Made a MakerBot a Cheap Bioprinter 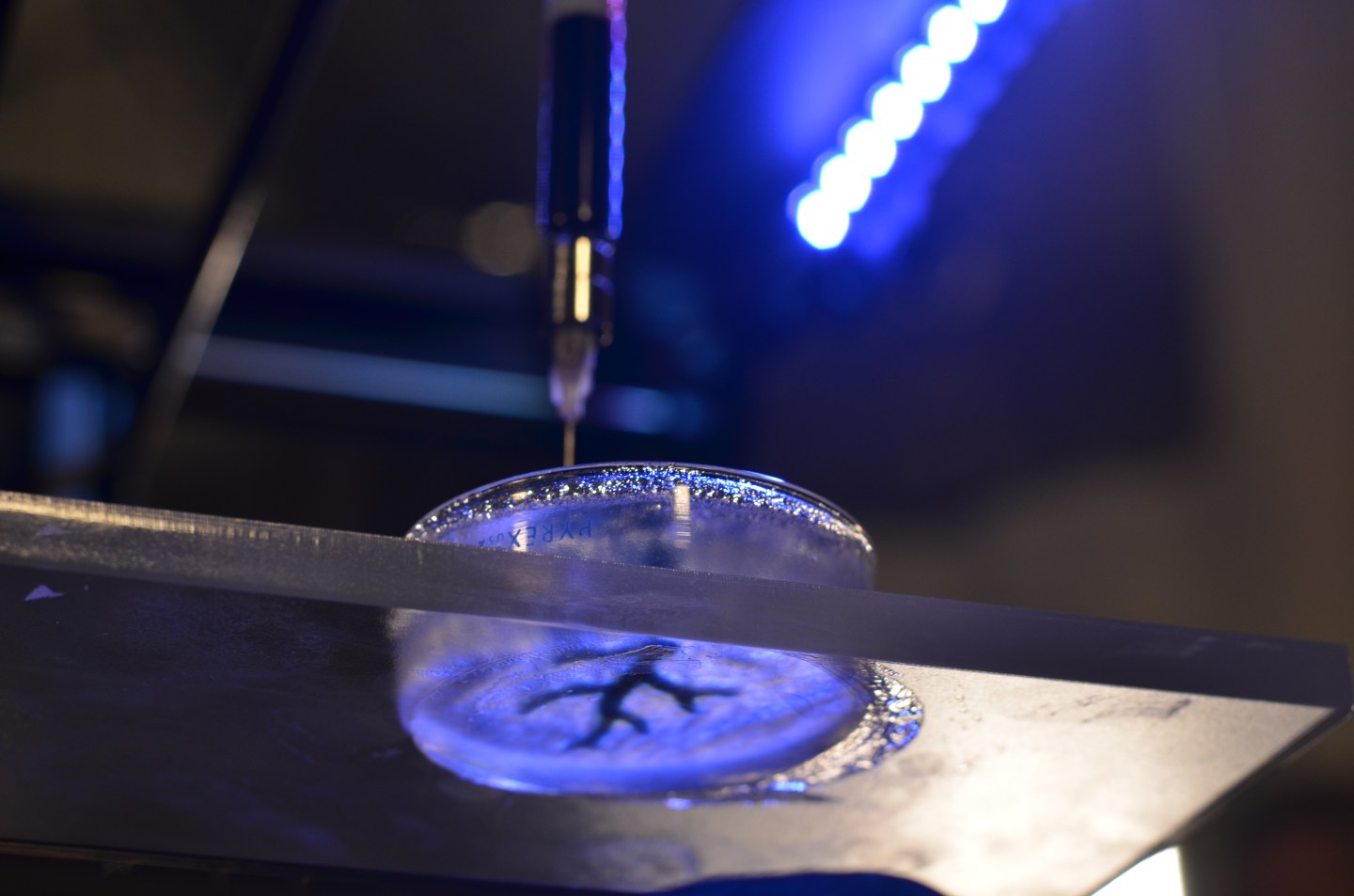 The question Carnegie Mellon University professor Adam Feinberg was trying to answer was how he could produce bioprints of cellular structures that wouldn’t collapse under their own weight while being printed. Being able to do that on the cheap would be nice, too, since industrial-size bioprinters cost more than $100,000.

One hacked MakerBot Replicator printer later, and he had his answer.

Since 2010, Feinberg has been working on a way to 3D print scaffolds, or cellular structures, that mimic what the heart does during embryonic development. The implications could be huge: Print such a scaffold from biomaterials mixed together with the right human stem cells, and one might be able to mature the printed product into heart muscle tissue. Heart muscle tissue, once damaged, is able to regenerate only in small amounts. Having a way to bioprint implantable heart tissue would be the first step in reducing the number of Americans waiting for a heart transplant—about 4,000, according to the United Network for Organ Sharing.

“Heart disease is the number one cause of death in adults,” says Feinberg. “So we’re trying to use the way the heart develops during embryonic development as a guide to rebuild heart muscle.”

But the challenge in bioprinting cellular scaffolds is in the softness of the materials. In this case, Feinberg has been using collagen, a protein found in skin, muscles, and tendons, and fibrin, a protein that helps in blood clotting. Layering these materials sometimes has the effect of producing a bioprinted object that collapses under the weight of air.

“They’re very, very soft. It’s the chemical properties of Jell-O,” Feinberg says. “If you start to create complex structures inside of that, it’s totally going to collapse.”

Feinberg’s innovation was to 3D print the cellular structures inside of a support gel of gelatin microparticles. He swapped out the standard MakerBot extruder—the piece that pushes out the material that would create a 3D-printed plastic object—and replaced it with a syringe. All the same software is used—his hacked MakerBot thinks it’s just printing a plastic object—but using a syringe allows Feinberg to 3D-print cellular structures inside of that support gel, which acts a little bit like mayonnaise: It’ll behave like a solid, and therefore cradle the cellular structure printed inside of it, but has just enough bend to it to allow a syringe extruding biomaterial to travel through it. The support gel melts away when heated to 98.6 degrees Fahrenheit, or normal human body temperature. What’s more, bioprinting with a syringe means Feinberg isn’t stacking a structure layer by layer, but printing continuously in a helix shape, kind of like how the 3Doodler pen works.

“The advance here is using a wider range of biomaterials and doing it at a higher resolution than you get with other systems,” he says. “Other systems that print in air are kind of limited in the complexity they can print in 3D. Our system allows us to get around that because we support it so well.”

So far Feinberg has bioprinted copies of coronary arteries and embryonic hearts using data collected from MRI images. The next step is incorporating real heart cells into these bioprinted structures as a way to regrow heart muscle tissue and testing the tissue’s survivability. But all told, it cost less than few thousand dollars for Feinberg to pull off his method of bioprinting, which is estimated to be a multi-billion-dollar market by the end of this decade. Large companies like Stratasys and 3D Systems are predicted to be big players in the bioprinting field. While Feinberg’s work is all research—he plans to release his 3D bioprints on the National Institute of Health’s open-source file database—the hack he performed spells good news for the growing number of startups beginning to tackle the bioprinting field.

“Having these technologies at a much, much lower cost will just accelerate the field,” Feinberg says.

For more on how technology is transforming healthcare, check out this Fortune video: