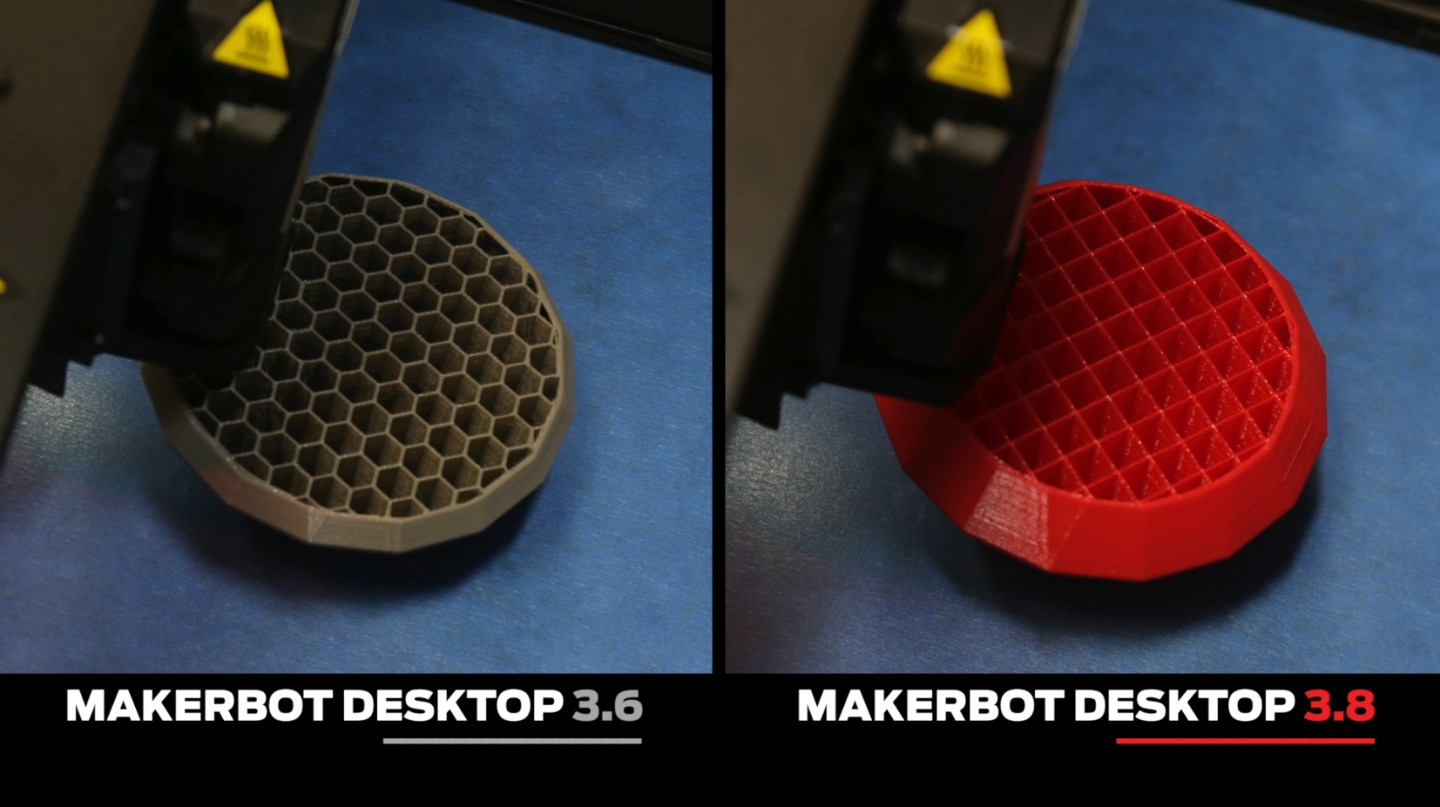 MakerBot, the Brooklyn-based manufacturer of desktop 3D printers, announced on Tuesday that its latest software upgrade will make its printers churn out 3D-printed designs 30% faster than before.

The upgrade accomplishes that in two ways. First, by allowing for a diamond infill pattern during printing, the extruder—that is, the part of the printer that pushes out the plastic material used to create the 3D-printed object—moves more quickly during turns. Secondly, a new “one click” option allows users to queue up a 3D print while “slicing,” the term used for converting a 3D design to a 3D-printable file, so the printing begins immediately after that process is finished.

“One of the biggest barriers in 3D printing is, if you can create a more seamless experience, and you can make it as easy as possible, then you’re going to draw and attract more demand,” said MakerBot CEO Jonathan Jaglom in a call with Fortune.

In late October, Stratasys issued some preliminary third quarter financial results. Among the highlights: Stratasys expects third quarter revenue to be about $168 million, which would be a decline of about 17% compared to Q3 2014. What that indicates for MakerBot is probably best understood by having another look at Stratasys’ financial results from the first and second quarters of 2015. Product and service revenue at MakerBot declined by 18% and 57%, respectively, and three months after Stratasys’ second quarter earnings call in July, MakerBot announced that another fifth of its staff was being laid off.

It’s hard times for 3D printing after several years of growth and excitement experienced by both Stratasys and fellow 3D-printing sector giant 3D Systems (also reporting third quarter earnings tomorrow). In a recent research report, UBS analyst Steven Milunovich seems to put his thumb on the pulse of what’s been plaguing the industry, writing that the 3D-printing market was “overhyped” and that 3D-printing technology “is immature in terms of speed, quality and reliability, which has caused problems for Stratasys and 3D Systems.”

In navigating a tumultuous market, MakerBot and Jaglom have taken steps to tap more deeply into the professional and education markets while the company resets its strategy for selling printers to the consumer market—which, in this case, is probably best described as home users of 3D printers, not necessarily consumers of 3D printing who might use a 3D-printing service bureau to design and purchase something printed in 3D. In the past Jaglom has said he thinks 3D printers will find their way into the homes of all Americans in the next decade, and he no doubt wants to make MakerBot’s line of desktop printers the most appealing choice. But that’s a tall order, mainly because most people don’t know how to do 3D modeling.

“The number one problem we need to solve: Lots of people have creative ideas, but not a lot of them know how to use 3D software,” said Peter Weijmarshausen, the CEO of online 3D-printing marketplace Shapeways, in a call with Fortune.

Ultimately, for MakerBot, that’s the point of such an upgrade: Remove any sort of impediment that might make a potential MakerBot user think preparing and actually producing a 3D print is more tedious than worthwhile. Now it’s time to see if it pays off.

For more on 3D printing, watch this episode of Fortune Live: