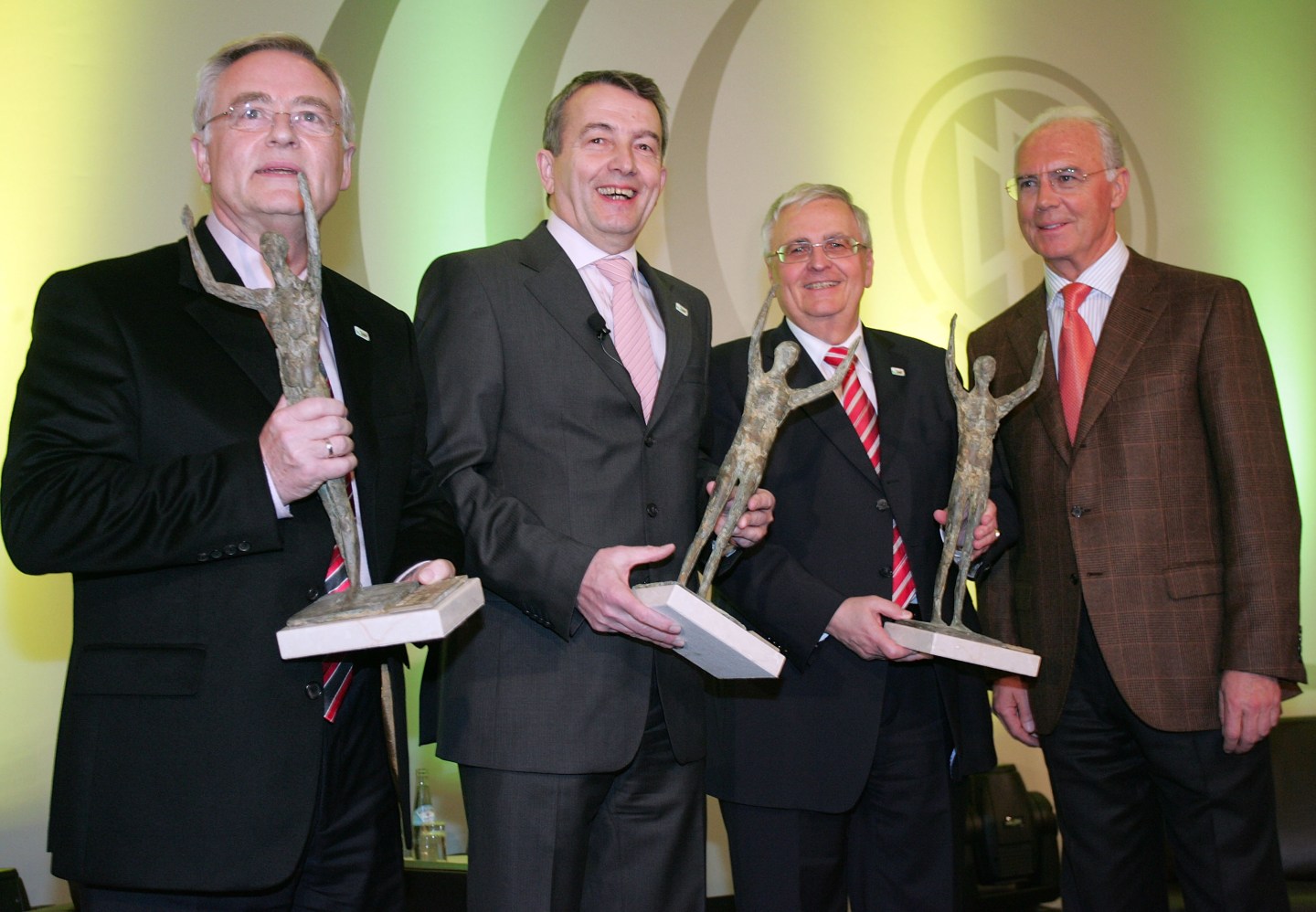 The competition goes on to see who can drag Germany’s international image into the mud fastest.

Hot on the heels of the Environmental Protection Agency’s second and potentially game-changing notice of violations against Volkswagen AG (VLKAY) over its diesel emissions, state prosecutors Tuesday raided the headquarters of the German soccer federation in an investigation into alleged bribes given in return for the right to host the 2006 World Cup.

Around 50 officials from the Frankfurt am Main prosecutors’ office raided not only the Deutscher Fussball-Bund’s HQ, but also the homes of its former treasurer Horst Schmidt, its former president Theo Zwanziger and the current president Wolfgang Niersbach (who was also deputy head of the committee that led the bid for the 2006 tournament). A spokeswoman for the prosecutors confirmed to Fortune that only three people are under investigation (without confirming their names).

German media report the usual playbook of files, computers and hard drives being taken away for inspection.

Prosecutors are having to take a somewhat indirect route to get to the bottom of the affair. The statute of limitations for bribery and corruption, under German law, has already expired, so prosecutors will look to bring charges of tax evasion, where the statute of limitations runs for 10 years from the moment a tax return is approved by the authorities. The nub of the case is a suspect payment of €6.7 million in 2005 that never made it on to the DFB’s tax declarations.

The DFB admits that in April 2005, it made a payment of €6.7 million to FIFA (although U.S. lawyer Quinn Emanuel, who has been retained by FIFA to investigate the Department of Justice’s allegations of corruption at the world soccer body, says the money never went to an account controlled by the Zurich-based organisation). The DFB initially said the money was destined for a ‘cultural program’ but it is alleged that the actual purpose of the payment was to use FIFA accounts to repay a loan to the (now-deceased) ex-Adidas CEO Robert Louis-Dreyfus. Louis-Dreyfus had (allegedly) deployed a slush fund to buy key votes in the bidding process four years earlier. He died in 2009, and Adidas–a long-time FIFA sponsor–insists it had nothing to do with the payment.

Ex-DFB Treasurer Schmidt tells a slightly different tale (read his statement in German here). According to him, FIFA had demanded the money as an up-front advance in connection with the transfer of 250 million Swiss francs to cover the DFB’s costs of staging the World Cup. The organising committee hadn’t known about this until 2004, when Beckenbauer told the DFB that Louis-Dreyfus had covered FIFA’s demands out of his own pocket, and that he personally had guaranteed repayment (going as far as to give Louis-Dreyfus a promissory note).

Schmidt’s version, of course, begs the question why, if the payment was official FIFA business, Emanuel couldn’t find it in FIFA’s accounts.

Beckenbauer, revered in Germany as still the only European to win the World Cup as both player (1974) and coach (1990), is the only one of the four-man presidium not to be a suspect in the investigation. He wasn’t reachable for comment Tuesday.

The DFB said Tuesday only that it “fully supports the investigation” and stressed that the association itself “is not a suspect.”

CORRECTION: The original version of this story incorrectly stated that Beckenbauer is the only man to have won the World Cup as both player and coach. Brazil’s Mario Zagallo has the same distinction.