10 women to watch during the New York Marathon 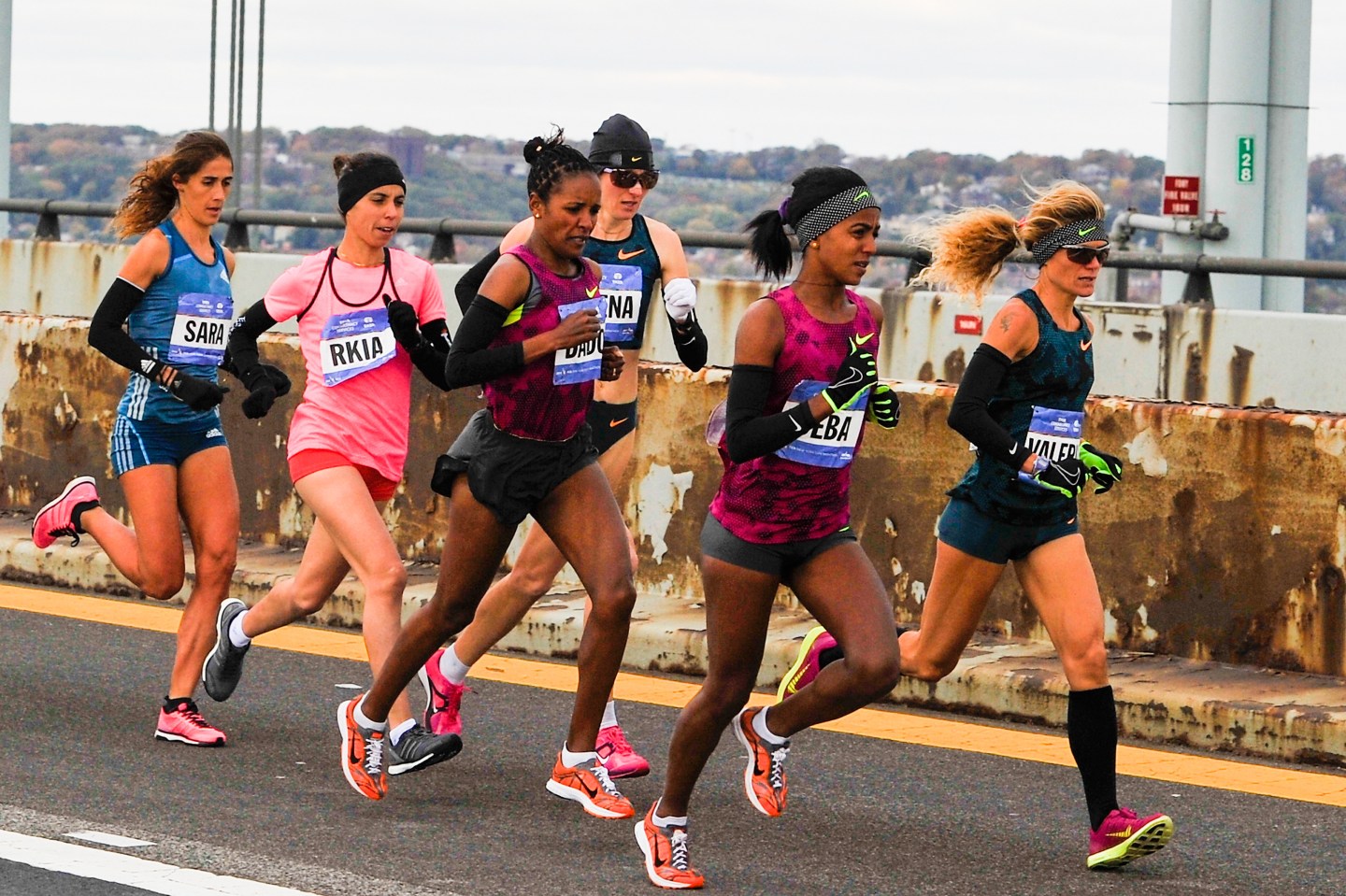 This Sunday, more than 50,000 runners will take to New York City’s five boroughs for the 26.2-mile New York City Marathon, one of running—and the city’s—most storied sports traditions.

For the more than 20,000 women who are expected to run on Sunday, it’s been an even longer trek to the finish line. When the marathon started in earnest in 1970, women in the U.S. and worldwide were fighting desperately for the right to be taken seriously in distance running. Katherine Switzer’s numbered entrance in the 1967 Boston Marathon was a sharp critique of her coach’s famous proclamation that a marathon was a distance that was too far for a “fragile woman.” (It would take five more years for women to be officially allowed in the race.) Women were barred from competing in the marathon at the Olympics until it was eventually added at the 1984 Los Angeles Games, where American Joan Benoit won the gold medal.

Today, thankfully, the picture is far brighter. Female participation in the New York City Marathon has slowly climbed to more than 40% of the total field and there is no shortage of fascinating women to watch in this year’s race, on and off the course.

Buzunesh Deba, of Ethiopia, looks over her shoulder on the home stretch of Boylston Street as she came in for a second-place finish in the women’s race of the 118th Boston Marathon on Monday, April 21, 2014. Photograph by Dina Rudick — The Boston Globe via Getty Images

Buzunesh Deba is an Ethiopian standout who trains in the Bronx and has a realistic shot at becoming the first-ever New Yorker to win the race.

Deba, who is coached by her husband, has flirted with the podium’s top perch in the past. She has run New York three times, finishing in the top 10 each time, including twice in second place. Her 2015 season has been off to a strong start, with Deba finishing third in the Boston Marathon earlier this year, running 2 hours 25 minutes and 9 seconds. This year’s field of American competition is slightly lighter than in the past due to the timing of the U.S. Olympic Marathon Trials making the roads all the more spacious for Deba to pop to the front of the pack at home.

Mary Keitany, a Kenyan powerhouse, is the defending women’s New York City Marathon champion and is returning this year to reclaim her title. She took second place earlier this year at the London Marathon, running 2 hours 23 minutes and 40 seconds and is one of the fastest women to ever compete in the sport, having set records in the half-marathon and 10-mile distances. She’s also one of the fastest mothers ever, having given birth to two children since 2008 with fellow runner Charles Koech.

Sally Kipyego, also of Kenya, may upset her countrywoman’s chance of reclaiming her title. Last year, Kipyego set the New York City half marathon women’s record and earlier this year won the Millrose Games women’s 3,000 meters. She has already hit the qualifying “A” standard for the Summer Olympics in the 5,000 meters but her appearance on Sunday will mark her marathon debut. Like Keitany, Kipyego’s strength is being able to sprint toward the end of her distance and upset finishers in the final moments. Will Kipyego still be able to have gas in the tank when she hits the mile 25 mark for the first time?

Alana Hadley is an American, 18-year-old running prodigy who will take to the course, even though age requirements may keep her from competing at the 2016 Olympics in Rio. American women have struggled to win medals internationally in the marathon, and typically most athletes age into the distance as their careers take on a second act, making Hadley unusual in taking on such a grueling distance early in her career as a runner. A student at the University of North Carolina at Charlotte, Hadley has been tweeting up a storm ahead of the race and posting on her blog, aptly titled “Growing up Fast.”

Tatyana McFadden is a longtime star of the wheelchair race and has accumulated more hardware than a Home Depot in the process. In addition to be an outspoken advocate for disabled athletes, McFadden won three gold medals at the 2012 Paralympic Games in London, set a course record at the London Marathon and won last year’s New York Marathon wheelchair division with a time of 1 hour 42 minutes and 16 seconds. In 2013, McFadden became the first and only athlete to win four of the world’s major marathons (Boston, London, Chicago, and New York), repeating the feat in 2014 and hoping to hit a threepeat, having conquered Boston and London earlier this year. And because wheelchair racing wasn’t enough, she won a silver medal at the Sochi Paralympics in 2014 in the one-kilometer sitting cross-country ski race.

Paula Radcliffe, a legend in the sport, will be inducted in the New York Road Runners Hall of Fame this year. Radcliffe, who hails from Great Britain, had one of the most memorable finishes in the history of the marathon here winning just three seconds ahead of Susan Chepkemei of Kenya in 2004. A mother of two who has battled asthma throughout her career, she is the current women’s world record holder in the marathon with a time of 2 hours 15 minutes and 25 seconds and is a three-time champion of the race in New York (2004, 2007, 2008). After the 2015 London Marathon, Radcliffe announced her retirement from competitive running.

Mary Wittenberg, formerly head of the New York Road Runners and one of the few women in sports business leadership, will be at one of the volunteer water stations up in Harlem toward the later legs of the race, cheering fans on. Wittenberg left the Road Runners earlier this year to take a position with Richard Branson’s Virgin Sports.

And the usual stable of celebrities will be tackling the race, most of them running for an assortment of charities. Pop singer and die-hard New Yorker Alicia Keyes will be competing, along with Katrina Bowden of “30 Rock” fame and Metropolitan Opera singer Susanna Phillips—who plans to complete the course after singing the national anthem.