The decline of the (red) meat industry — in one chart 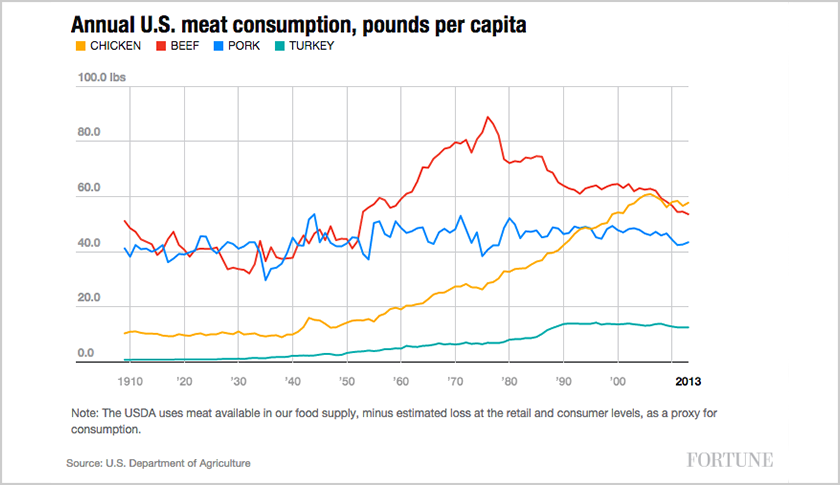 The World Health Organization’s classification of processed meat—bacon, hot dogs and sausage—as a carcinogen and red meat as a “probable” carcinogen is just the latest salvo in the meat-eating debate. Immediately under attack by meat industry groups and praised by some activists, the determination by WHO’s International Agency for Research on Cancer (IARC) won’t settle the question of whether red meat causes cancer. But it could accelerate a trend already well under way in America: the decline in red meat consumption.

Beef consumption peaked in the mid-1970s, according to the U.S. Department of Agriculture, while chicken consumption has doubled since that time.

It’s impossible to pinpoint just when the idea that Americans should strive to eat less meat gained hold, but Marion Nestle, professor of nutrition and food studies at New York University, says it dates back at least to the late 1950s. That’s when Ancel Keys, the first scientist to champion the health benefits of Mediterranean diet, advised cutting back on meat, primarily because he believed in restricting saturated fat. Then, in the 1970s, a few scientists began linking red meat to cancer.

“By the late 1990, experts were saying that red meat ‘probably’ increases the risk of colorectal cancers, and ‘possibly’ increases the risk of pancreas, breast, prostate, and kidney cancer,” says Nestle, author of Big Soda Politics. The International Agency for Research on Cancer reviewed decades of research and placed processed meats in the same category as smoking or asbestos. But it said it didn’t have the data to determine how much processed meat is a danger.

The USDA figures show that there was a decline in beef consumption over decades, while there was a sharp and steady rise in chicken consumption. One sign that Americans were growing wary of red meat is that the National Pork Board launched a campaign in 1987 positioning pork as “the other white meat.” Many doctors have advocated eating white meat instead of red meat because white meat is lower in saturated fats. Both the USDA and IARCC both classify pork as a red meat (though the role of saturated fat is under debate.) Still, the USDA figures show that the National Pork Board’s campaign may have been effective—as pork consumption has held remarkably steady.

Recently, the question of meat’s environmental impact has become as important as its impact on human health, with the USDA’s advisory panel recommending that the latest edition of the Dietary Guidelines advise Americans to eat less meat, in part due to environmental sustainability concerns. After an uproar from the meat industry and some members of Congress, the federal government said it would reject that recommendation.

The World Health Organization’s classification is likely to just add fuel to that controversy—and perhaps add to Americans’ concern about eating red meat.