Why trucks are one step closer to automatic brakes 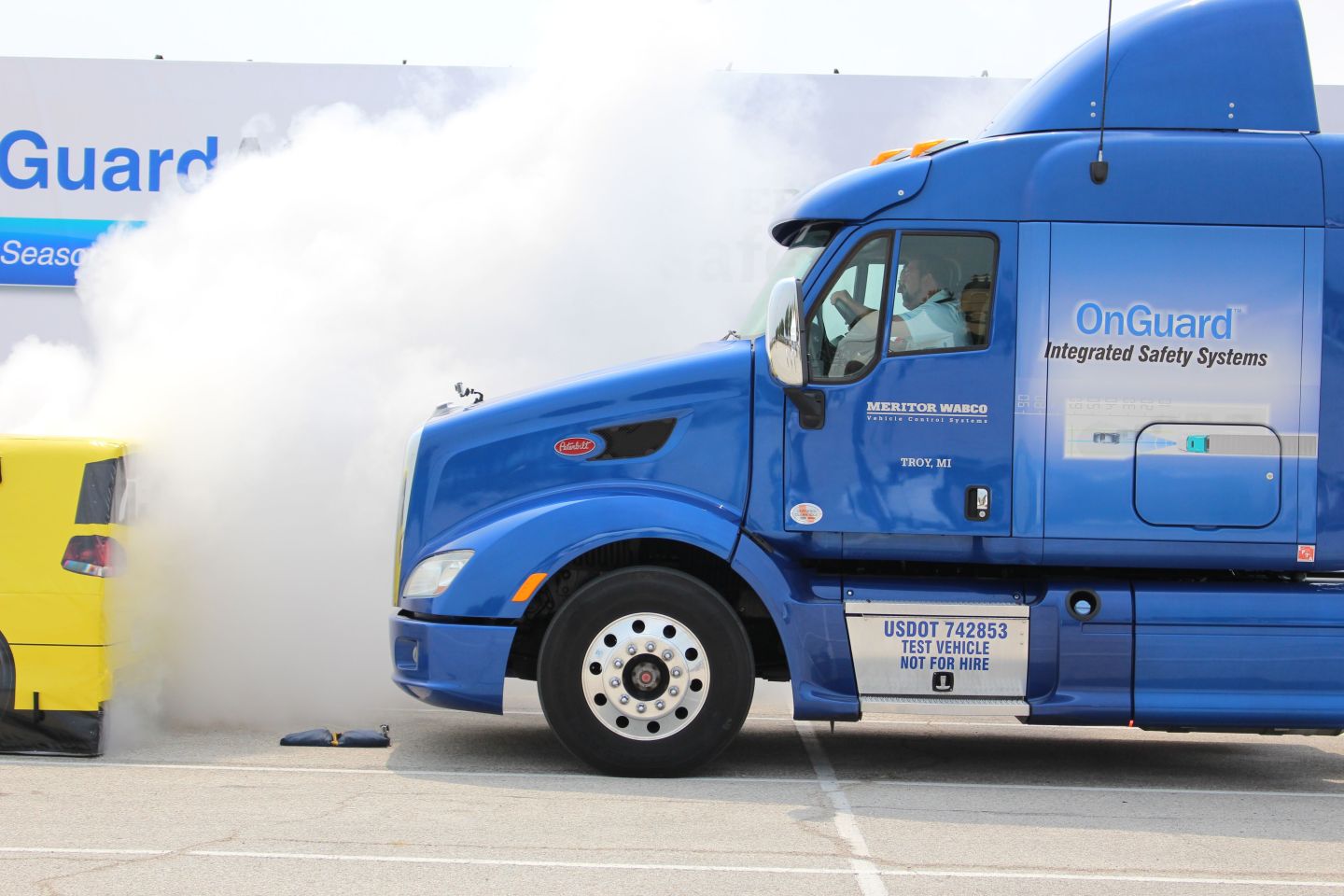 In the early morning of April 22, 2015, two cars carried a group of nursing students slowly along Georgia’s Interstate 16. Stuck in stop-and-go traffic, the Georgia Southern University undergrads inched towards their final day of clinical rotations of their first year of nursing school.

Then, suddenly, a tractor-trailer operated by Total Transportation of Mississippi failed to stop for the line of traffic. In the ensuing multi-car pileup, five of the nursing students were killed.

The National Highway Traffic Safety Administration has now announced that it will consider mandating all large trucks carry the automatic emergency braking systems that could have prevented that accident, and thousands like it across the U.S. each year.

Automatic emergency braking (one of various names for the systems) uses radar, lasers, and cameras to see as far as 650 feet in front of a truck—about three times the typical follow distance on highways. They first signal a driver of upcoming obstacles, and then, if the driver doesn’t react, will slow or stop the vehicle. The technology has been available for nearly a decade, and is already in service in tens of thousands of trucks across the U.S. and Europe.

The NHTSA’s acceptance of the petition is “a significant step forward,” according to Clarence Ditlow, director of the Center for Auto Safety. CAS joined with other safety groups to petition for the rule.

There are still several stages left in the process, but many in the industry think the rule will eventually go into effect. “It’s just a matter of when,” says industry veteran John Flynn, CEO of fleet management provider Fleet Advantage. The systems are already scheduled to become mandatory on many new commercial trucks in the European Union starting Nov. 1.

Flynn also points out that the life cycles of large trucks have gotten much shorter in recent years, thanks in part to steadily rising fuel economy standards. That means the new safety technology would penetrate the commercial fleet quickly once a rule is enacted.

Large commercial trucks have gotten more dangerous over the last five years. While miles traveled and the number of registered trucks has held relatively steady, the rate of accidents has inched up, from 29.26 fatal crashes per 100,000 trucks in 2009, to 36.86 per 100,000 in 2013. NHTSA also found that in 2013, 64% of those crashes involved frontal impacts by trucks—crashes which could have been prevented or mitigated by automatic braking.

Stephen Hampson of Meritor WABCO, which has produced emergency braking systems since 2007, says that fleets using the technology have reported between 60 and 80% reductions in rear-end accidents and associated costs. He says about 90,000 Meritor WABCO systems are already on the road, and that some truck manufacturers already include the systems in as many as 25% of their new trucks.

MORE: In trucking, a little automation saves a lot of money

Truck drivers, though, often view automatic systems as slights against their professional skills, or even as safety risks. Flynn has seen that resistance to new technology—at least at first. When automatic transmissions debuted, he says, “We had resistance on the front end—they all said, ‘Oh, I don’t want that.’ But all the drivers that got automatic transmission, they’d never go back.”

“You have to get over that macho image for a moment,” says Flynn.

Meritor WABCO has campaigned hard for driver acceptance, putting on demonstrations across the country to show off the systems’ ability to do the humanly impossible, like seeing through fog banks and dense rain. Hampson also emphasizes that the systems, with their several layers of alerts, are designed to help drivers, not second-guess them.

“Essentially what you want to do is re-engage the driver,” says Hampson. “You want the driver to pilot control the truck.”

The bigger picture could give truckers a different set of worries. The past 10 years have seen an explosion of automated systems on trucks, including adaptive cruise control, lane-departure warnings, and electronic stability control (which NHTSA has already mandated for large trucks by 2017). That buildup is leading, bit by bit, to fully autonomous trucks. While that will be a huge boon to overall driving safety, it could also push human truck drivers out of the picture.

But Flynn’s not worried about driver’s jobs. He imagines they’ll be present to monitor automatic systems, while being freed up for planning and paperwork duties on the road.

“I don’t think there’s any scenario where there’s not a driver in the truck,” says Flynn. “I don’t see the public accepting that for a long time.”

NHTSA officials did not respond to requests for comment for this story.

For more Fortune coverage of automated vehicles, watch this video: