In trucking, a little automation saves a lot of money 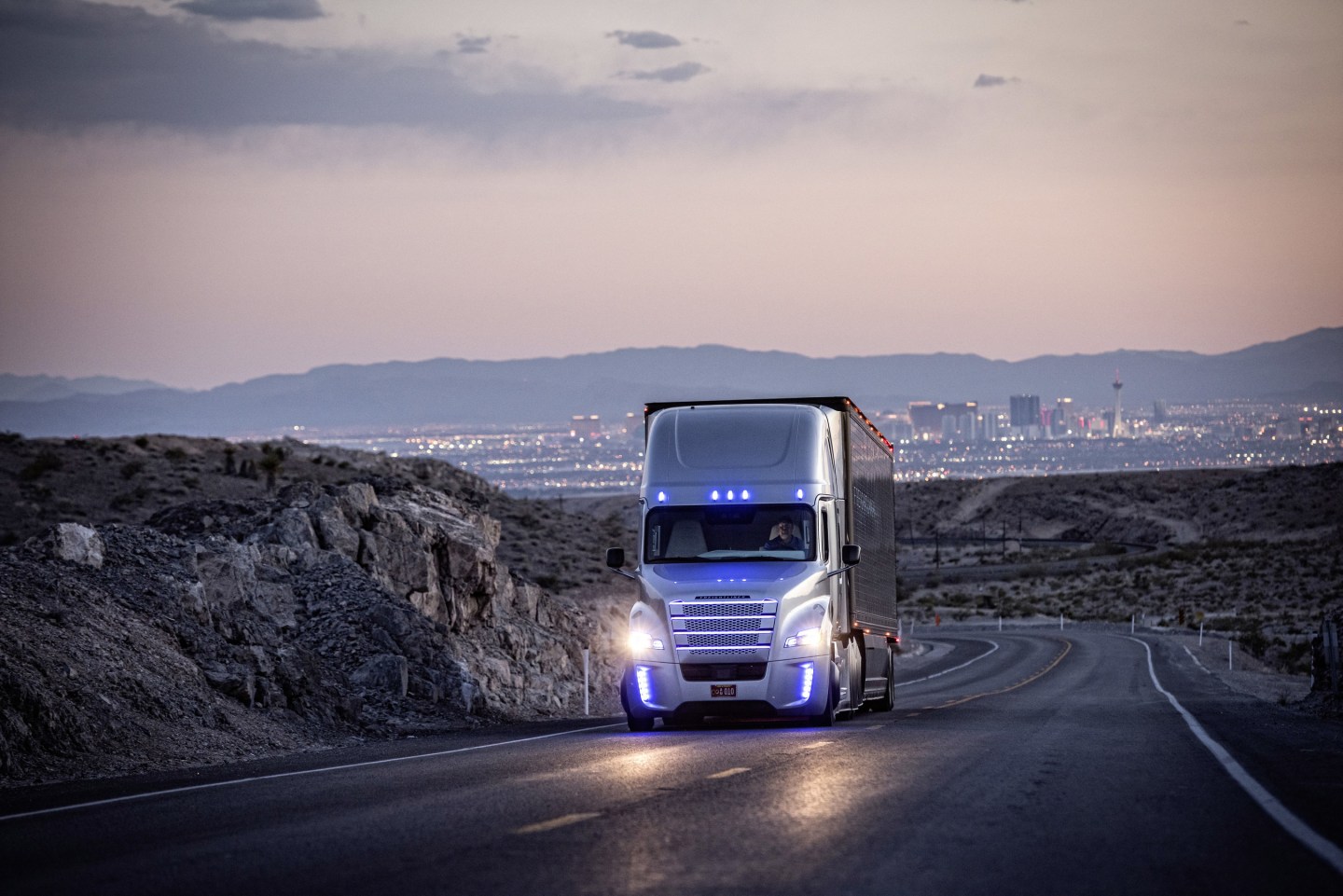 Freightliner Inspiration Truck Unveiled at Hoover Dam. First Licensed Autonomous Commercial Truck to Drive on U.S. Public Highway (PRNewsFoto/Daimler Trucks North America LLC) THIS CONTENT IS PROVIDED BY PRNewsfoto and is for EDITORIAL USE ONLY**
Photograph by Daimler AG/PR Newswire/AP

The dream of a fully-automated semi truck is getting closer to reality every day—earlier this month, for instance, Daimler announced that it would begin testing an automated truck on public highways in Nevada. Thousands of hours of testing and significant regulatory hurdles put practical automation at least a decade away, but benefits are coming sooner from partial automation systems that enhance the performance of human drivers and increase efficiency.

According to trucking analyst Andy Ahern, 60% of wasted truck fuel is caused by driver overacceleration—for instance, hitting the gas on the way down a hill, only to have to brake to slow down at the bottom.

Continental AG’s eHorizon system, housed in a small unit that connects to trucks’ existing controls, works to prevent that waste. It uses a topographical database to plan acceleration and braking to take advantage of momentum on hills. The system can plan acceleration decisions before a human driver can even see the hill around the next bend.

Robert Gee, Continental’s head of product management, says that eHorizon reduces overall fuel consumption by around 3%. That might not add up to much for a small car, but it can save around $2,000 worth of fuel for a single freight truck per year.

The technology is already deployed in trucks manufactured by Sweden’s Scania AB, and Continental claims those trucks have saved 16 million gallons of diesel fuel since 2012—that’s $62 million in savings. The American Trucking Association counts 2.4 million semi trucks on the road in the U.S., so nationwide use of such systems could save as much as 1.6 billion gallons of fuel and $4.8 billion annually. The U.S. Energy Information Administration states that burning a gallon of diesel fuel generates 22.38 pounds of atmospheric carbon, so using such systems has the potential to cut truck emissions by more than 35 billion pounds per year.

Another possibility for automated efficiency is truck platooning. Truck drivers have known for decades about the fuel-efficiency benefits of drafting—closely following a leading truck to reduce wind resistance. But drafting is incredibly dangerous. A human driver’s baseline reaction time is about half a second, not nearly enough to respond to a braking truck just a few feet ahead.

Menlo Park-based Peloton Technology is developing a system that would make drafting safer by linking adjacent trucks into ‘platoons’ of two or more following a lead truck. A wireless vehicle-to-vehicle communications link and automated braking would allow trucks to respond nearly instantly to changes in speed. In tests conducted with a fairly generous 36-foot follow distance, the North American Council for Freight Efficiency found that trailing trucks burned 10% less fuel.

With persistent safety concerns, a worsening driver shortage, and fuel costs that are once again rising, there’s plenty motivating the trucking industry to incorporate more partial automated systems into its trucks.