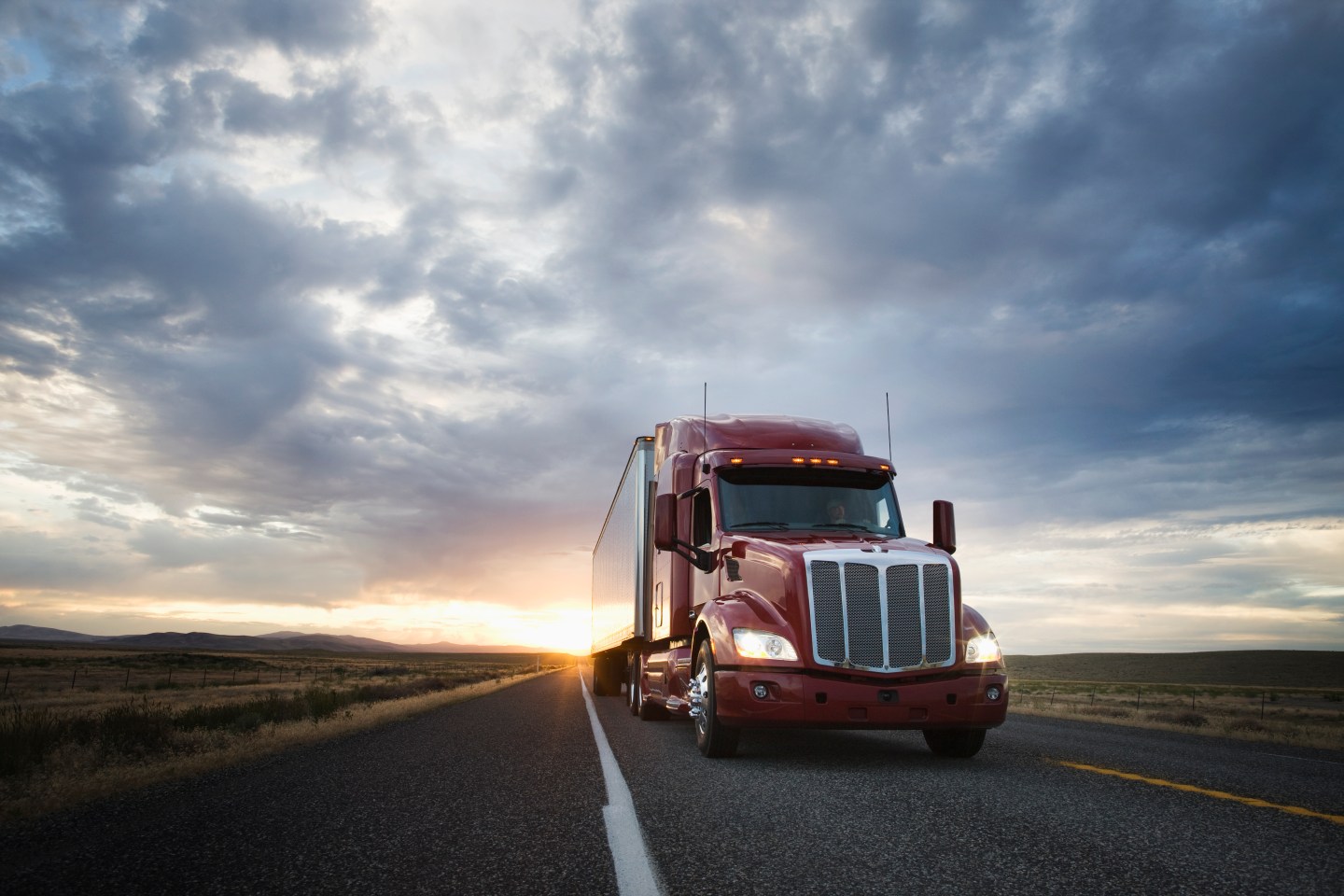 “I’m in an industry,” says Phil McRimmon, “That I will never hurt for a job.”

McRimmon’s been a trucker, mostly long-haul, for the more than twenty years since he retired from the Army. He currently drives routes that take him far from his home in Granbury, Texas. He loves the freedom of the job, the sense of making his own decisions day in and day out.

He’s also, in many ways, the face of the trucking industry’s labor problem.

The American Trucking Association claims that there’s a current shortage of between 35,000 and 40,000 truck drivers nationwide. Trucking companies report lots full of idle trucks and ready cargo, but not enough drivers to move them. The operator Con-Way recently blamed the driver shortage for declining volumes and profits.

With trucks moving nearly 70% of all U.S. inland freight according to the ATA, the driver shortage could have a nationwide impact on consumer prices as labor costs rise.

The ATA estimates that continued economic expansion could demand the addition of as many 100,000 drivers a year to keep up with demand. The ATA’s chief economist, Bob Costello, has said that the driver shortage is likely to get worse before it gets better. To deal with the driver shortage, trucking companies are focusing resources on retaining labor.

The most obvious option for attracting more drivers is money. “Pay’s going up substantially, because it has to,” says Andy Ahern, CEO of trucking consultancy Ahern and Associates. Ahern cites companies including Celadon, CRST, Boyd Brothers, CR England, and U.S. Express as recently increasing driver pay. From an average paycheck of $40,360 as measured by the Bureau of Labor Statistics in 2012, he ventures that freight drivers are now averaging a bit over $50,000 a year.

In trucking, short labor drives wages higher very directly, as drivers can easily jump ship from one carrier to another. And turnover rates for long-haul truckers are truly staggering—96% in the fourth quarter of 2014, according to the ATA. The rate for local truckers is a much lower 10%, but that still dwarfs the national turnover rate across all industries, which the Bureau of Labor Statistics put at 3.5% in March.

McRimmon illustrates this dynamic. He’s been working his current contract, delivering empty cargo containers, for less than a year. Before that, he drove refrigerated cargo, but he says the new gig pays better and puts less strain on his truck—though he says he hasn’t noticed broader pay increases, perhaps reflecting significant geographic discrepancies in driver pay.

Wages are only the start of the industry’s labor challenges. McRimmon owns his big rig, just like about 350,000 other owner-operators nationwide, as counted by the Owner-Operator Independent Drivers Association. According to Ahern, truck prices have ballooned in the past five years thanks to mandated environmental and monitoring technologies, and financing for aspiring owner-operators is hard to come by.

Deeper problems with recruiting are reflected in trucking’s aging workforce. The average age of truckers is currently 49, compared to 42 for the labor force as a whole. McRimmon is 63, and says he plans to retire within five years.

Despite trucking’s status as one of the increasingly scarce middle-class careers open to those without a college degree, efforts to recruit younger drivers may be hampered by negative public perception, increasingly strict oversight and regulation, and limited opportunities for advancement.

McRimmon has encountered plenty of disdain for his profession, and the idea that to be a truck driver, it takes “the intelligence of a monkey.” But as he points out, trucking actually requires detailed attention to scheduling, routes, and fuel efficiency—and to a raft of regulations that strictly control drivers’ time on the road and rest breaks.

Pete Dannecker, director of fleet safety for Pennsylvania-based A. Duie Pyle, speculates that the predictability of a career in trucking may be a turn-off in a culture that worships innovators. “Everybody knows who Bill Gates is, everybody knows who Steve Jobs is,” he observes. “But quick, name four great truckers. It’s not a glamorous business . . . and there’s not a great chance to make the million.” Pyle has worked to counter that sense of limited opportunity by recruiting two-thirds of management from within, while supporting new drivers during their training.

The one clear solution to the labor shortage is years away, though advancing steadily: automated trucks. They’re already operating on closed sites like Rio Tinto’s Pilbara mine in Australia, and Daimler AG has just received approval to test automated highway driving in Nevada. But however badly the trucking industry may need it right now, automation is at least a decade away. The trucking industry will need to find another solution in the interim.