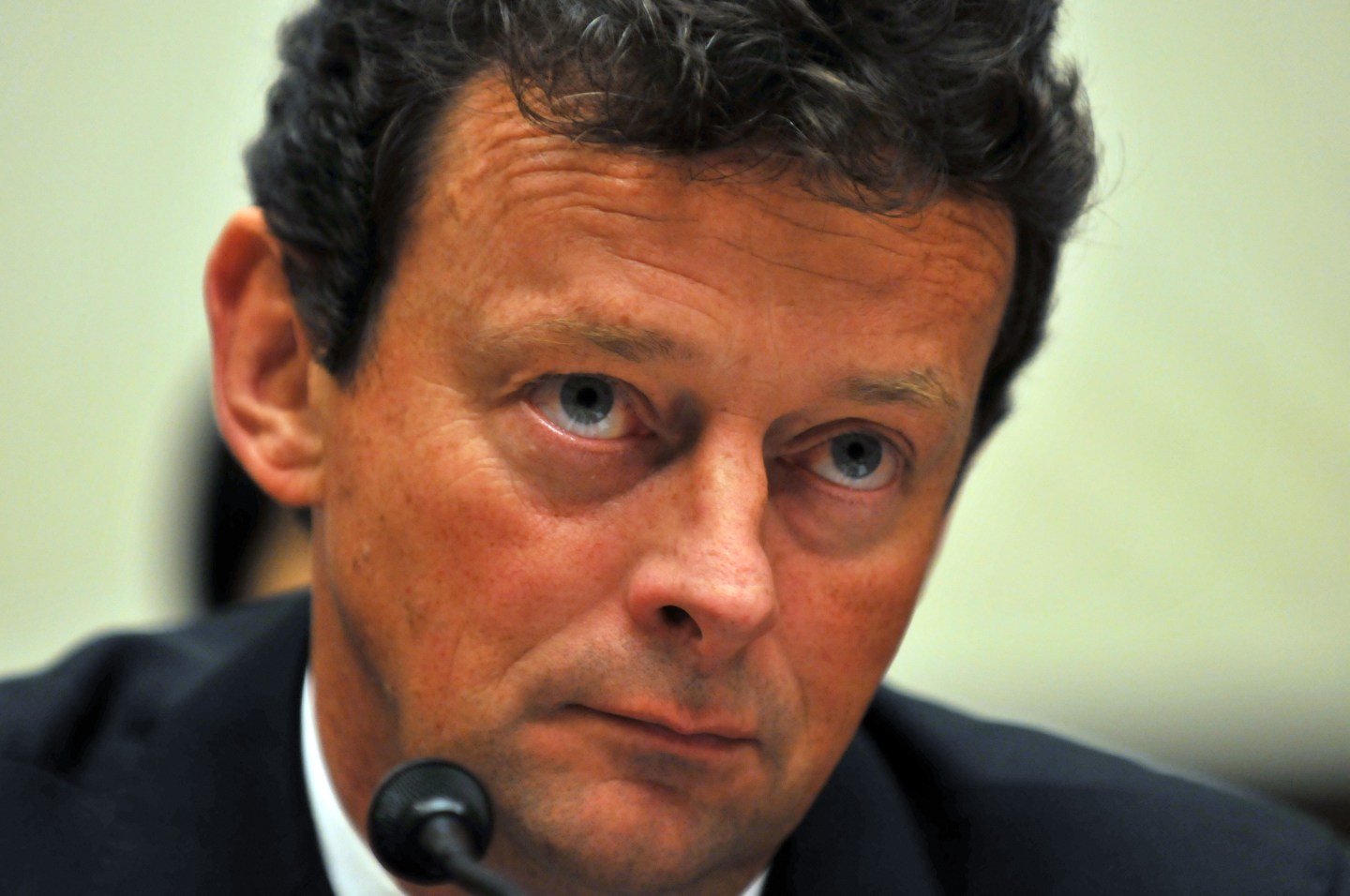 BP CEO Tony Hayward listens to opening statements from members of Congress as he waits to deliver his opening remarks before a House Oversight and Investigations Subcommittee hearing on "The Role Of BP In The Deepwater Horizon Explosion And Oil Spill", in the Rayburn House Office Building on Capitol Hill in Washington, DC, June 17, 2010. Hayward is appearing before members of Congress as the historical and deadly oil spill disaster is nearing two months. AFP PHOTO/ROD LAMKEY JR (Photo credit should read ROD LAMKEY JR/AFP/Getty Images)
Rod Lamkey Jr./AFP—Getty Images

Apologies are in the air these days. This month, outgoing Procter & Gamble CEO A.G. Lafley took responsibility for the consumer product giant’s weak performance at the company’s annual meeting and promised improvements. United’s new (and currently sidelined) CEO Oscar Munoz apologized to the company’s employees and passengers for its poor treatment of them. Pope Francis apologized—again—for the scandals bedeviling the Catholic church. Volkswagen apologized for selling cars with software designed to defeat pollution control regulations. And more than a year ago, Mary Barra, CEO of General Motors, “gave a full-throated apology for the defect-and-recall disaster” arising from flawed ignition switches.

Virtually every company and person is, at some point, going to screw up. So the question becomes, if, and how, you should apologize. As for the first issue, to apologize or not, conventional wisdom in public relations says to apologize whenever a company or person makes a mistake. But holding aside the fact that apologies sometimes seem like admissions of blame, leading lawyers to counsel against apologizing to reduce potential liability, there are other considerations that also make the choice less straightforward.

The archetypical example of admitting blame and moving on is Tylenol. In 1982, Johnson & Johnson recalled 31 million bottles of Tylenol from stores after seven people died from taking cyanide-laced capsules. Although the recall cost the company $100 million, Johnson & Johnson’s stock price—and Tylenol’s market share—soon recovered. In drawing lessons from this story, people sometimes overlook a few important and unique facts. First, the company was not responsible for the product tampering, which could not have been reasonably anticipated. Second, the solution to the problem—creating tamper-evident packaging—was clear. So J & J was able to get the problem behind it and do so in a way that did not embarrass the company or its employees.

Apologies do seem to make recovering from errors easier and less expensive. For instance, research shows that physician apologies for medical errors reduce the likelihood of litigation and decreases the average payout by $32,000

Kennedy School lecturer Barbara Kellerman, in discussing when to apologize, makes two important points. First, when someone is wronged, even unintentionally, they expect an apology as a way of obtaining a least some measure of justice. Unfortunately, in today’s world, everyone apologizes all the time. Therefore, they may not be as effective because talk is cheap and people expect actions, not just words, to ensure that the behavior doesn’t happen again.

But second, when companies and their leaders apologize, they are speaking not just to wronged or potentially harmed people, but also to other constituencies, including their employees, shareholders, and their boards of directors. That makes apologizing much trickier. In saying sorry, a leader is potentially undercutting employees’ feelings of pride in the institution and their attachment to the company and its work.

The case for not apologizing

In the aftermath of the financial crisis, Goldman Sachs was accused of betting against—or shorting—securities it had sold its clients. In 2010, the bank faced a Senate committee headed by Carl Levin of Michigan and eventually settled accusations against it for hundreds of millions of dollars. Also in 2010, BP confronted House of Representatives’ committee hearings on the oil spill in the Gulf of Mexico. I use excerpts from the testimony of the two CEOs—Lloyd Blankfein of Goldman Sachs and Tony Hayward of BP—to illustrate to my business school students how to deal with objectively tough situations.

Blankfein never apologizes, never admits that Goldman did anything wrong, and mostly looks puzzled as he explains to his interrogators how financial markets work—for every buyer there is a seller, and vice versa. He notes Goldman’s age, venerable history, size, success, and the talent of the firm’s staff. He refuses to accept the characterizations that others make of the firm and its behavior. And he ceaselessly reiterates the importance of the firm’s clients and their trust—and that the firm only did what was requested of it. At one point he notes, “People wanted an exposure to the housing market, and that’s what they got.”

By contrast, Hayward in his testimony never puts BP and its activities in context—why was the company drilling in the Gulf of Mexico in the first place, with pressures of thousands of pounds per square inch? He apologizes but then seemingly ducks responsibility, noting that he had nothing to do with the drilling of that well, and, in his testimony, he is relying on the reports and recommendations of others.

Most viewers like Hayward’s contrition and are repelled by Blankfein’s arrogance. But Blankfein still has his job (and some large bonuses) and Hayward is long gone. In part, that reflects an uncomfortable but important psychological truth, nicely described by Stanford social psychologist Larissa Tiedens: people accord more status to those who express anger than to those who express sadness or remorse. Both anger and sadness are negative emotions, likely to be expressed when things have gone wrong. But one emotion connotes power, and the other does not.

When in crisis, or maybe all the time, people look to leaders to assess whether they believe the leader can guide the organization through its problems. They seek expressions of confidence and assurance that the leader is in control. Companies should apologize when it’s appropriate, but they should also provide reassurance and confidence that everything is going to be fine.

One other strand of research is relevant to apologies. People are notoriously bad at predicting how they will feel in the future—a phenomenon called forecasting errors. A recent study shows that people overestimated how much they would value an apology, rating an expression of contrition more highly when they imagined receiving it than when they actually did, and predicting that they would trust the individual delivering the apology more than they did when they received one.

So life is complicated. On the one hand, companies need to make amends to those that have been harmed. On the other hand, companies need to retain their people—the talent that makes them successful. We think we want apologies from those who have harmed us. Yet we instinctively respect strength, confidence, and assurance. And throughout, our ability to forecast our true reactions to situations is imperfect.

For guidance on how to “apologize,” watch any one of the 33-minute YouTube versions of Steve Jobs apologizing for what came to be known as “Antennagate.” When Apple introduced its iPhone 4, there were reports that the phone’s built-in antenna did not work well and there were front-page articles on the device’s reception issues and dropped calls. The brouhaha came to be called “Antennagate.” After a few weeks of media frenzy, Jobs decided to hold a press conference in a big auditorium—recorded, of course, for future watching and distribution. He did his usual masterful job.

After admitting that “we’re not perfect” and offering a free iPhone case (to help mitigate the problem of people touching the phone in the wrong place and accidentally interfering with the built-in antennas), Jobs went on to compare the iPhone’s performance (favorably, of course) to that of its competitors, note how many iPhones had already been sold (3 million), how few customers had complained (just 0.55% of buyers), and that fewer than 2% of people had returned their iPhone 4. In short, Jobs used the occasion of a presumed apology to do what he always did—sell the company and its products. He did this by articulating a narrative that placed the situation in the most favorable light for Apple, Jobs, and the company’s employees who created and sold its products.

The lessons from watching Steve Jobs apologize for a product problem seem both clear and generalizable:

Although people often think they want apologies, they also are attracted to strength and confidence and often overestimate how much they will value an apology. This is why apologizing, and doing so in a way that maintains confidence, is trickier than it might look.

Jeffrey Pfeffer is the Thomas D. Dee II Professor of Organizational Behavior at the Graduate School of Business, Stanford University. His latest book, Leadership B.S.: Fixing Workplaces and Careers One Truth at a Time, was published in September 2015 by HarperCollins.