An app that aims to break down the barriers to English 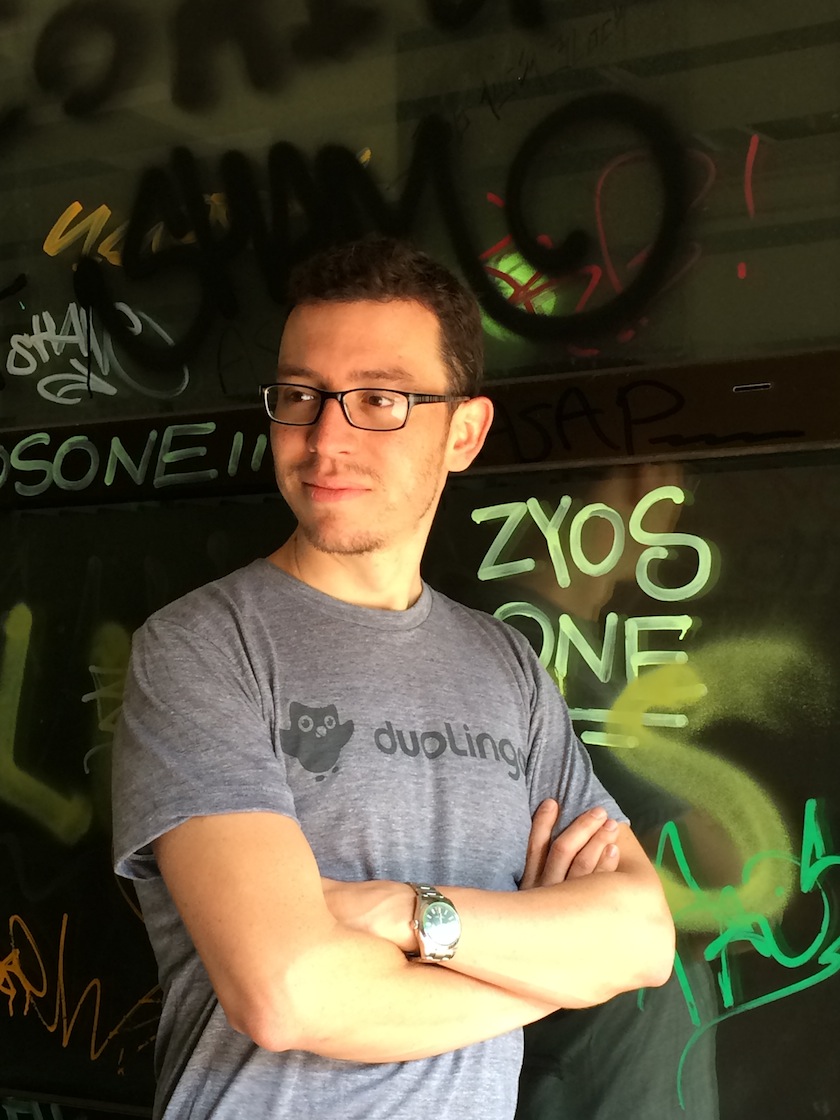 Luis von Ahn’s free language-learning app, Duolingo, is the convergence of his crowdsourcing genius, gaming interest and desire to democratize learning. So far, it’s worked better than he ever expected. More than 100,000 new users a day sign up for Duolingo, which “gamifies” language learning on a smartphone app.

And now the Pittsburgh-based company is extending its reach even further by becoming an English proficiency test, a $20 alternative to more expensive established tests.

In just four years, Duolingo has grown so rapidly that 100 million people around the world have downloaded the app that teaches 46 courses in both real and fantasy languages. From English, speakers can learn 13 languages ranging from Spanish to Klingon to Esperanto. People waiting in line in the grocery store or at a doctor’s office can do a few translation exercises or work on pronouns in a program that was named App of the Year by Apple and Google’s Best of the Best in 2013.

Language learners who sign up take a small placement test and then pick exercises that allow them to unlock to new levels of proficiency. Users are rewarded for playing on consecutive days; those who fail tasks will see Duolingo’s mascot green owl cry tears that will dissolve into a small puddle. (The size of the puddle was researched to optimize the return of users).

The 36-year-old von Ahn–sometimes called “the father of crowdsourcing” because of the innovative ways he’s applied it to technology–is a professor of computer science at Carnegie Mellon University. He and Severin Hacker (yes, the real name of the Swiss-born computer scientist who was a graduate student under von Ahn) co-founded Duolingo in 2011 because they wanted to use their work on crowdsourcing to democratize education. And making language learning accessible resonated with von Ahn, who grew up in Guatemala City, where there is a wide economic gulf between the well-off who receive English instruction and the poor who can’t afford it. Von Ahn was a member of the comfortable class: the son of two Guatemalan doctors, he attended an English-language school before getting a bachelor’s of science in math at Duke University and a Ph.D. in computer science at Carnegie Mellon University, where he is now a professor in the computer science department.

“In Guatemala, everyone wants to learn English to get out of poverty. The ironic thing is if you want to learn English, it takes $1,000” with traditional language learning programs, he said.

While Duolingo is free, the technology it runs on isn’t. von Ahn concedes that a smartphone may be a barrier to the poorest. But he said people can run Duolingo on a $100 Android phone that can be operated on Wi-Fi. “There is a funny statistic from the U.N. that more people have access to mobile phones than toilets,” he said.

He said that giving people a language-learning app, akin to Candy Crush, makes it a better bet they will actually use it to learn a language, instead of traditional methods. “Trying to learn something on your own requires going somewhere and spending hours on it. It’s just too much of a to-do and most people don’t have enough motivation. If we can turn it into something that is always with you and you can do it three minutes here, five minutes here, a lot more people are going to do it. That is what we are seeing with Duolingo.”

Duolingo gives people their gaming buzz by rewarding them with a virtual currency called Lingots, which can be cashed in for, say, a champagne track suit for the owl mascot or a bonus lesson on flirting in Spanish. Users also get running tallies of consecutive-day streaks and can compete with their friends.

An average of 34 hours on Duolingo is equivalent to a semester of language education at a university, according to an independent study conducted by the City University of New York and the University of South Carolina.

If von Ahn is gamifying learning, perhaps that is because he learned how to use a computer playing games. At age 10, he nagged his mother for a Nintendo and was upset when she bought him a Commodore 64 computer instead. But that disappointing gift helped propel him on a career as a tech entrepreneur. “I had to learn how to use the computer to play games. The games were expensive and my Mom wouldn’t buy me anymore. So I had to use my computer to pirate them.”

While still a graduate student, he helped to develop CAPTCHA, those squiggly-letter tests that humans can read but computers cannot, preventing bots from wreaking abuse on a website. In 2006, he received a MacArthur “genius” grant, and in 2007, von Ahn applied his crowdsourcing expertise to reCAPTCHA, which helps digitize books. People who log into the computer are fed an image of a word scanned from an old book that is being digitized. In 2009, he sold reCAPTCHA to Google for an undisclosed sum before moving on to Duolingo.

As Duolingo has grown, it uses crowdsourcing to let volunteers add new languages. In fact, its incubator program is so popular, it received 30,000 applicants. Three to five fluent volunteers have been selected to create each of 30 new language programs.

Duolingo has received backing from an impressive roster of backers, including a $45 million investment round led by Google Capital in June. Union Square Ventures, Kleiner Perkins Caufield & Byers, actor Ashton Kutcher and author Tim Ferriss also have invested in the company.

Of course, making money from a free app is always a challenge. Initially, the company made money by crowdsourcing translations and selling them to private companies. But von Ahn said it wasn’t the best model because they needed a large sales force and “it’s a race to the bottom as far as price. If you say 3 cents a word, someone else says 2 cents a word, and then you have to do 1.5 cents.”

He believes the new English proficiency tests fits well into the core mission of helping poor people improve their lots. People who studied English for free can now take a proficiency test for only $20 –a fraction of the cost of other certification tests such as TOEFL, he said. People can take the Duolingo test on their computer under the eye of a proctor making sure they don’t cheat. That eliminates the added expense of traveling to a test center.

The test is used by Uber in Colombia, the Harvard Extension School, and a few other institutions. The company is talking to other schools and companies about accepting the test, and von Ahn expects the company to break even next year.

Von Ahn, who speaks Spanish and English, is now learning Portuguese on the app he developed. But he no longer plays video games. “I stopped playing games. I spend all my time with Duolingo.”