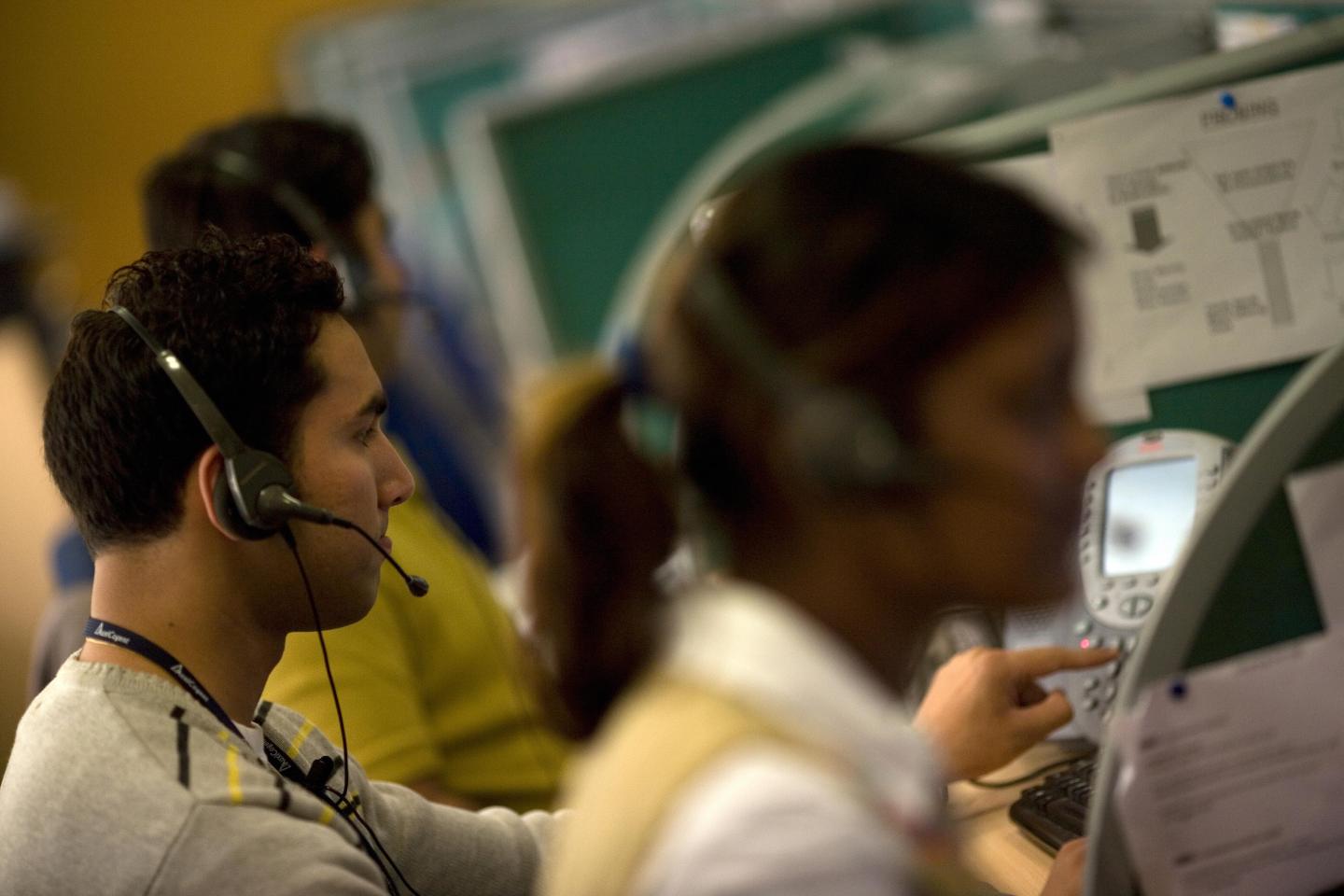 Indian workers answer telephone calls at a call-centre in Gurgaon on the outskirts of New Delhi on December 5, 2008. Delhi, the capital of India, is the site of seven principal cities built throughout the centuries by different rulers who came and conquered, establishing their presence with grandiose buildings, some of which lie in ruins amonst the sprawling urban mass that the city is today. As the nation carves out an increasingly significant role in the global economy, modern day Delhi is slowly being conquered once more as a new urban elite make their mark on the landscapes and lifestyles of the city. AFP PHOTO/Findlay KEMBER (Photo credit should read FINDLAY KEMBER/AFP/Getty Images)
Photograph by Findlay Kember — AFP/Getty Images

Hold it right there!

A pop-up notification bursts onto the screen of your computer. “Critical Security Warning!” the text exclaims, bearing its message in Alarming Title Case! Your device has been—gulp—INFECTED.

And with a “malicious adward attack,” no less. Please, you think to yourself. not “adward.” Either A) my device is in such a rush to alert me about this problem that it has abandoned orthography altogether, or B) this so-called adward is some next level computer virus I’ve never encountered before.

What do you do, dear user? Panic, perhaps? Call the 11-digit tech support line the alert recommends? Break out into a cold sweat and question every digital decision that led you here? How about trying this: Keep calm. And ignore it.

No, there is nothing seriously wrong with your computer. (That we know of.) The device’s manufacturer is not directing you to its support page. In fact, that’s not an official support page at all; the whole production is a scam.

Jérôme Segura, a researcher at the malicious software removal company Malwarebytes, reports on his company’s blog that there’s a new electronic grift in town. While fraudsters have long attempted to fool Microsoft (MSFT) Windows users into handing over their money, login credentials, or into installing malware on their machines through ruses that employ fake alerts and counterfeit tech support sites, now the crooks have begun targeting Apple (AAPL) Mac users.

“These pages are designed to scare people into thinking there is something wrong with their computer,” Segura writes of the scheme. The cyber thieves will fear-monger by any means necessary: Pop-up alerts, loud threats, deceitful warnings. Anything to trick a panicky user into falling for the con.

The swindle is a lucrative, albeit illegal, endeavor. One early scammer (of the non-Apple imposter variety) made off with $4 million in a single year between 2010 and 2011, Ars Technica notes. (The general premise is nothing new: The U.S. Federal Trade Commission has warned people about similar phone-based scams, too.)

In the latest iteration of this cyber subterfuge, the scammers have set up a sham site called “ara-apple.com”—an address that closely resembles the real Apple tech support page, https://ara.apple.com/—where customers can securely connect with technicians, allowing them to troubleshoot computer problems. “Scared victims will often comply and pay between $200 and $500 for bogus support packages,” Segura tells Vice Motherboard.

Be on the lookout for such rackets, Segura advises. “As always, please be particularly suspicious of alarming pop ups or websites that claim your computer may be infected,” he says. “Remember that Apple would never use such methods to have you call them or would never call you directly either.”

Indeed, it’s better always to stop and think: Is this adward trying to trick me?

For more on cyber scams, watch this video.

Follow Robert Hackett on Twitter at @rhhackett. Read his technology and cybersecurity coverage atfortune.com/author/robert-hackett. And subscribe to Data Sheet, Fortune’s daily newsletter on the business of technology, where he writes a weekly column.