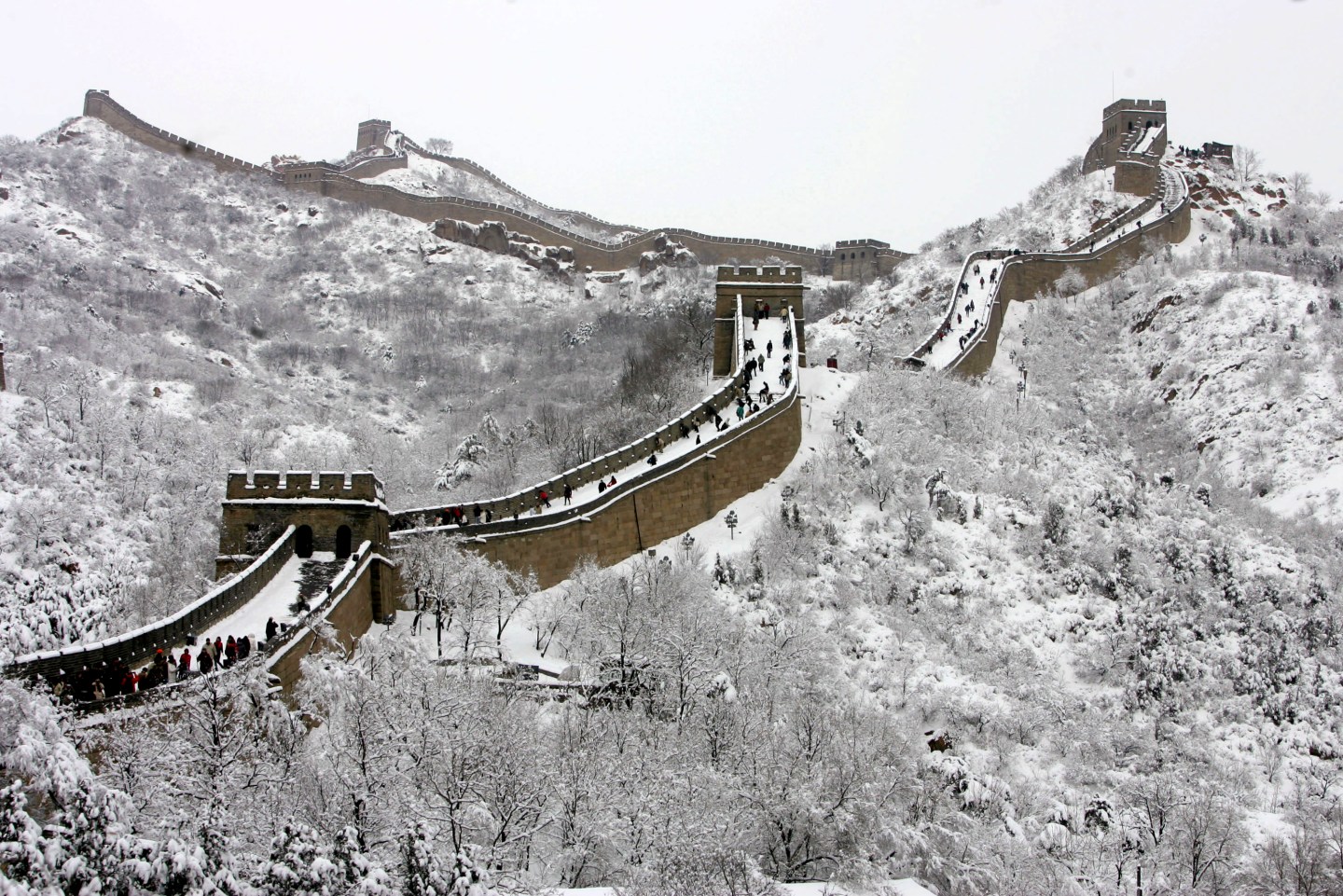 BEIJING, CHINA - MARCH 4: (CHINA OUT) Tourists visit the Great Wall covered by snow on March 4, 2007 in Beijing, China. A moderate rain and snow began to hit most parts of drought-plagued north China on March 3 as farmers and authorities have been struggling against the drought that has affected millions of hectares of croplands and caused drinking water shortages. Chinese capital Beijing experienced rain and snow of 21 to 32 millimeters on March 3 and 4, according to the Beijing Meteorological Observatory. (Photo by China Photos/Getty Images)
Photograph by China Photos/Getty Images

Here’s an eyebrow raiser: IBM is showing some of its software’s source code to Chinese authorities, according to a Wall Street Journal report citing unnamed sources.

The story also noted that IBM (IBM) senior vice president Steve Mills was quoted by Chinese media talking about the sharing agreement Thursday but could not confirm that.

According to the report, Chinese officials will be able to look at the software in a special room, but not retain, copy, or share, the source code, which is basically the nuts-and-bolts used to build software programs. Proprietary software companies treat their source code as a closely-guarded trade secret. Open-source software, on the other hand, is an open book. In a humorous coda, Mark Collier, chief operating officer of the OpenStack Foundation, which backs open-source code tweeted:

“Full disclosure: we let the chinese government view the OpenStack source code in any room they want.”

If the Journal report is true, this is an interesting development for a few big reasons. First, the U.S. government and many tech firms based here have had a strained relationship with the Chinese government for years over alleged trade secret theft and industrial spying. Second, despite all that angst, U.S. tech companies are desperate to enter the potentially huge Chinese market for cloud computing and other services.

The feeling is that if IBM caved on source-code sneak peeks, others may follow in a move that could rankle U.S. trade authorities.

Asked for comment, an IBM spokesman said via email that the company will conduct “limited demonstrations of specific aspects of our technology in highly-secure, controlled IBM environments that have no external communications links.” It was unclear whether those demonstrations would include views of source code.

IBM runs these demos to show stakeholders that there is no way for others to access IBM technology or customer data. He reiterated that IBM never shares customer data with anyone, and that IBM is in “full compliance” with U.S. export regulations.

These technology demonstrations are not unique to IBM, he said, noting that Microsoft offers similar programs in China.

It’s important to point out that charges of espionage go both ways. China remains miffed about disclosures by former NSA hand Edward Snowden that the U.S. intelligence agency spied on both the Chinese government and Chinese companies. So there.

Earlier this week IBM announced plans to bring its Bluemix cloud-based development software to China by year’s end. Last year, Microsoft (MSFT) opened a cloud computing data center in Beijing. Amazon (AMZN) now offers Amazon Web Services to select customers in China. Google (GOOG), on the other hand, is another major cloud computing supplier but has no data center presence in China and famously removed its Internet search engine from the region a few years back, citing censorship concerns.

Meanwhile, Alibaba, the Chinese-based e-commerce giant, is pushing its own AliCloud (or Aliyun) public cloud services both in China and, increasingly in the U.S., posing a potential competitive threat to U.S. providers worldwide.

This story was updated at 1:47 p.m. EDT with Mark Collier’s comment.