This is the favorite word of Fortune’s Most Powerful Women 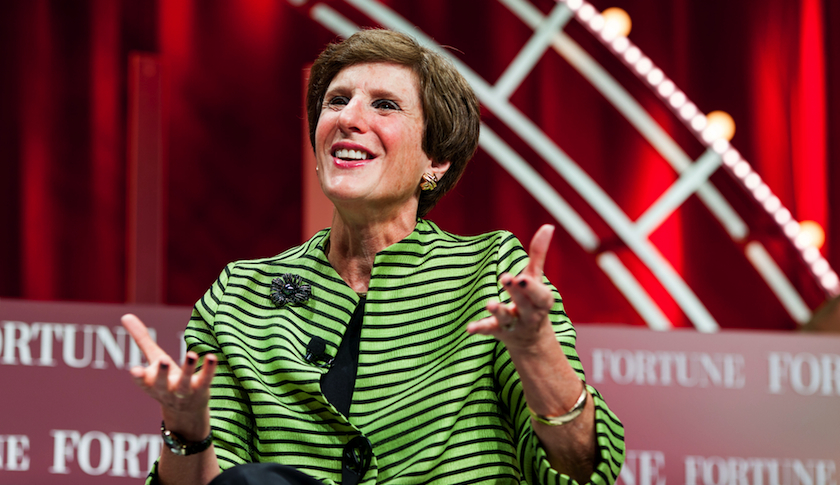 Which word was spoken most often in the CEO interviews during this week’s Most Powerful Women conference in Washington, D.C.?

In Tuesday’s interviews with five CEOs—Ginni Rometty of IBM; Marillyn Hewson of Lockheed Martin; Mary Barra of GM; Ursula Burns of Xerox; and Irene Rosenfeld of Mondelez International—the most commonly used word was “think,” which was uttered by the women 101 times.

“I think it is imperative that the cost of one’s cuts be sustainable. They can’t just be episodic. I think many companies have the experience where they get themselves in a jam…”

This discovery seems counter-intuitive at first: Aren’t we cautioned against using the word “think” too much? Research has shown that women tend to use “tentative” speech more often than men do, and female speakers are often counseled to avoid using qualifiers, for fear of appearing to lack confidence and certainty.

In reality, though, these five women displayed 24% more confident language than the average Fortune 500 CEO, according to our communications platform, which analyzes language and speech patterns and uses that data to benchmark speakers against one another.

Our platform is based on research that suggests that content that uses concrete, vivid words and phrases reflects a confident speaker. In addition, it factors in the use of phrases that strengthen the audience’s understanding of the subject. For instance, statements like, “to ensure growth, we invested in $10 million in this project” or “this is how we define success,” enhance listeners confidence in the message a speaker is conveying.

Here are just a few of the dozens of examples of the self-certainty these Most Powerful Women conveyed:

Burns’ use of the word “think” in a more hypothetical sense indicates that her scope of awareness expands beyond her own company’s inner workings. Here, “think” connotes an aptitude for, or at least interest in, problem-solving on a global scale. Burns shows no sense of hesitancy.

When Rometty tells her interviewer, “I think of that question differently,” she indicates that she has actively listened to his question and processed it carefully in order to answer accurately. She is describing her thought process, and how she views the question. (The use of “think” is especially apropos for the IBM CEO—it’s been a Big Blue motto since the company’s earliest days.)

“Where they’re really tested or where you have moments of truth, is when you’re going through a difficult challenge, and what I’m really proud of, and this was not only myself but my leadership team, we demonstrated our values, we put the customer in the center…we were transparent, and I think that’s vitally important, and that has really allowed us to emerge a much stronger company.” – Mary Barra, CEO, GM

As Barra reflects on the actions of her team during the recent recall crisis, the pride she expresses indicates her confidence that GM handled the struggle in the most appropriate way. Her use of the word “think” here demonstrates that she has formed a careful, informed opinion about the values the company ought to embrace, and the way they live those values day in and day out.

Even though excessive use of tentative language—like the word “think”—tends to undermine a speaker’s position, these women combined powerful insights with concrete language, allowing their confidence to shine through.

While the word “think” might point to uncertainty in some cases, it could also indicate thoughtfulness. After all, aren’t women known for processing and exploring thoroughly before coming to a decision?

Oh, and in case you’re still not convinced that a preference for the word “think” and a stellar confidence rating could coexist, consider the second most popular word among these CEOS: “know.”

Noah Zandan is the CEO of Quantified Communications, an analytics company that uses technology and data to help C-suite executives measure and strengthen their communications.