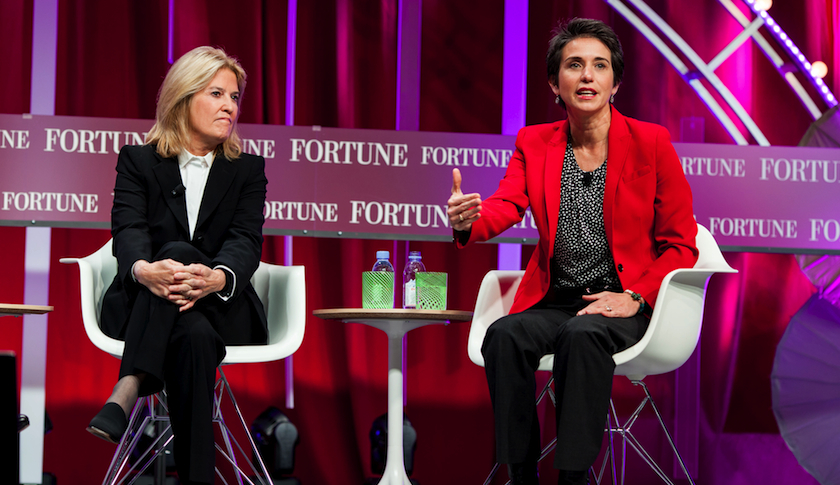 After Tuesday night’s Democratic debate, some Washington insiders believe Hillary Clinton’s performance will keep others out of the race—including Vice President Joe Biden.

That was the message from both Fox News host Greta Van Susteren and Amy Walter, national editor at The Cook Political Report, during a panel at Fortune’s Most Powerful Women summit on Wednesday. In Walter’s view, that means that the biggest threat to Clinton winning the Presidential nomination is herself.

Van Sustern concurred and said that if Clinton performs as she did during the debate for the rest of the campaign, she’ll be fine. But “if she acts dodgy and slippery and loose with the facts, she’s got a problem.”

In fact, Walter said, Bernie Sanders signaled during the debate that he was not going to challenge Clinton for the nomination. She noted that moderator Anderson Cooper handed her opponent several opportunities to go after Clinton on issues such as her email server, but Sanders didn’t take them.

As to who will replace John Boehner as house speaker, both Van Susteren and Walter doubted that Paul Ryan, who is being heavily courted, would go for the job. “He’s a very practical guy,” said Van Susteren. “It’s the world’s worst job. It’s like herding cats.” Van Susteren said she believed Boehner would end up remaining in the role until January 2017.

The biggest threat to the Republican party, Walter said, is that it lacks consensus on what its policies should be moving forward. “They’ve been so defined by who they aren’t,” she said, “but they’re not unified on what they are.” While Republicans can agree that they don’t support anything related to President Obama, Walter said they don’t have a path forward on issues like immigration or entitlement reform.

As for the Republican Presidential candidates, both Van Susteren and Walter said it’s not surprising that Washington outsiders like Donald Trump and Ben Carson have the most appeal. “What’s more surprising is the vacuum on the establishment side,” Walter said. She said there’s no one filling the void of the “non-establishment establishment candidate.”

Van Susteren also questioned whether the power of social media might lessen the value of campaign coffers. But if the old paradigm still exists and money matters, she says Jeb Bush has an edge.

Walter equated this stage in the election cycle to dating: At this point, the public is most interested in whether the candidate is fun, attractive, and interesting. “As you move along and it get more serious, if he’s still living in his parents’ basement that becomes more important to you.” She said that substance matters more as the race progresses. At some point, “the dating is over and now you have to pick someone to marry.”