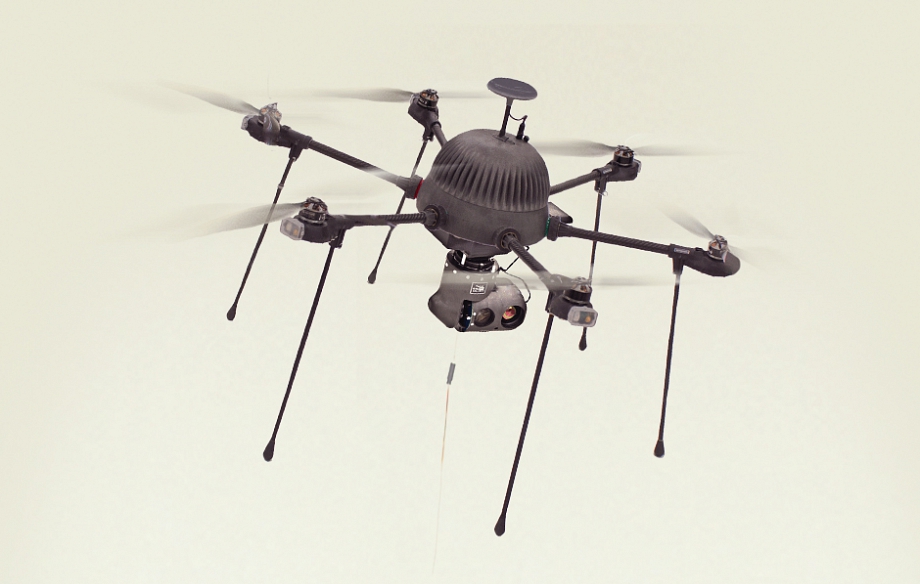 For most companies, a commercial drone’s value stems from its mobility. Unmanned aircraft can go places that people (and even conventional aircraft) can’t. The devices zip quickly through the sky to gather data and imagery that would be impossible—or incredibly expensive—to capture otherwise.

CyPhy (pronounced Sci-Fi) wants to turn that conventional wisdom on its head. The aerial robotics startup helmed by former iRobot (IRBT) co-founder (and president) Helen Greiner has spent the last seven years developing drone technologies around the idea that for many applications drones are more valuable when they’re tethered to the ground. CyPhy recently raised $22 million in Series B venture funding, and now set to bring that idea to the commercial market before the end of this year.

The startup’s new commercial drone product—known as Persistent Aerial Reconnaissance and Communications vehicle system, a.k.a PARC—is a drone like many others on the market; it’s a multi-rotor, camera-toting platform capable of capturing imagery and data from hundreds of feet up. Unlike other drones on the market, PARC is tethered to the ground by a microfilament cable running from a ground control station up to the hovering aircraft.

That microfilament tether serves as a high-speed data connection, beaming high-resolution video or imagery from the drone to the ground instantly. It also provides the drone with continuous power from the ground, making PARC a 24-hour-a-day aerial surveillance platform. So while PARC sacrifices mobility by being wired to the ground, it provides users with an eye in the sky that can loiter there more or less indefinitely. “It’s more like a near-earth satellite than a drone,” Greiner says. “So we’ve gone a different way than the rest of the industry.”

CyPhy is betting that this persistent, 24/7 data stream is more valuable than mobility to customers in any number of industries, ranging from national defense to facility security and management to heavy industries like construction, mining, and energy. That commercial potential has captured the interest of investors and strategic partners ranging from Bessemer Venture Partners to Motorola Venture Solutions and the strategic investment arm of UPS.

CyPhy has been putting its platform through its paces with testers in the U.S. military and with strategic partners like Motorola Solutions (MSI) . Its latest funding round will allow the company to put PARC on the commercial market before the end of the year, Greiner says. That could go a long way toward changing customers’ minds about what drones can do—or need to be able to do—to augment their operations.

“There have always been people making free-flying UAVs [unmanned aerial vehicles] or drones,” Greiner says. “When we talked to customers, whether military or commercial, what they didn’t like is having to constantly launch and land UAVs because then they have to pay someone to do that job. So they’re not saving money with the drone anymore.”

PARC launches automatically from the ground station with the push of a button, flies upward, and remains in place overhead for as long as the user needs it aloft. It comes standard with an electro-optical/infrared camera and has extra payload space available for additional sensors or communications equipment should the customer require them.

Tethered drones aren’t CyPhy’s only entry into the market. Its six-rotor, free-flying LVL1 camera drone—one aimed at the consumer and light-industrial markets—has gathered 1,500 supporters (and nearly $900,000) on Kickstarter and is moving toward 2016 delivery to customers. It’s a drone like many others on the market, designed for aerial photography and video, save one key innovation: because of its unique rotor layout and design, it doesn’t have to tilt to fly forward. That means the camera stays level even in forward flight and can be mounted within the drone body rather than on an exposed gimbal hanging from the aircraft’s underbelly.

It’s these kinds of small but important improvements that are driving CyPhy’s development, Greiner says. Whether it’s tethering them to a ground station for persistent surveillance or rethinking rotor layout to solve a photography headache, the commercial drone industry has reached point of maturity and commodification wherein just being a drone is no longer a selling point. Platforms that don’t solve specific problems for customers are already on the losing end of technological evolution, Greiner says.

“Anyone can put four rotors on sticks,” she says. “It’s innovation, pushing the boundaries around customer needs, that’s the differentiator.”

For more on drone technology, check out the following Fortune video: