How Felicia Day became ‘Queen of the Geeks’ 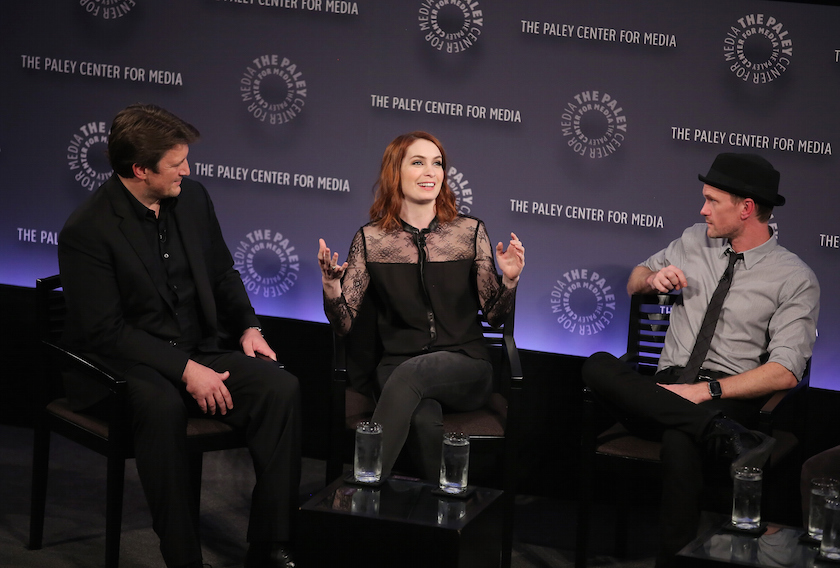 Big media needs help. Wooing an audience that has seemingly countless consumption options (Netflix, Amazon, Hulu, YouTube, and the many other distractions on the Internet) is no simple feat. And then there’s Felicia Day, an actress/writer/producer/digital entrepreneur who somehow makes it look easy.

Day, 36, who is known for her work on TV and web shows like Dr. Horrible’s Sing-Along Blog, Supernatural, and The Guild, helped define what a successful career in digital culture can look like and, in the process, has been bestowed the title of “queen of the geeks” (an honorific she has resisted). In 2012, Day launched a YouTube channel (currently at 1.3 million subscribers) and digital content company called Geek & Sundry, which she sold to Legendary Entertainment in 2014. She recently published You’re Never Weird on the Internet (Almost), a hilarious, insightful memoir that takes readers on a tour of her unconventional upbringing and career path. Fortune spoke with Day before she made her way to a New York Comic Con event. The following is an edited transcript of the conversation.

Why did you write a memoir at 36 years old?

Digital has come to the forefront so quickly, and I think eight years in digital might be dog years. The landscape has changed so much and it was directly parallel to my getting into the space. And every time I talked about my story, people responded in very inspired ways, either creatively or business wise. And I wanted to submit my own story versus spreading it out amongst the lectures I do and interviews and things like that.

You are an actor by trade, but you found yourself in a digital media career. How did that happen?

It was not something I ever planned on doing. I grew up with the idea that you could connect with other people online way before that was an actual instinct for most people. And I think that native feet on the ground, virtual feet on the ground, so early allowed me to see avenues to getting creativity out there that were just emerging on the Internet.

As an actor, I got frustrated with a lot of my opportunities and I wanted to tell stories that could feature me as an actor as well as just stories I believed in. In seeing that you can pick up a camera and put a video on this new platform called YouTube, it really was liberating. I didn’t have an end goal. I just wanted to have a fulfilling outlet for my creativity.

What about your acting career frustrated you?

I was very lucky to work as an actor. I made a living. I think 90% of people in the union don’t actually make a living acting. But I kept getting pigeonholed as types of characters that I didn’t feel were really what I wanted to play. I was just showing the world a sliver of who I am, to be a commodity that was easier to digest and sell.

Turning to writing was a creative outlet for me to get my voice out there. And that’s the wonderful thing about the web. Every day, you see artists emerging in music, and entertainment, in comedy, in front of and behind the camera, who were able to find an audience that would never have been traditionally thought to exist for their voices. If somebody can succeed being a professional video game player or a professional vlogger, then that allows the gatekeepers to see new options for audience and offers us more of what humanity is.

Do you think those gatekeepers—big media, in other words—have come around?

Every day, I see digital rising and becoming equal to TV. A Snapchat is as legitimate as a movie in a sense now. They are all pieces of content and they’re getting people’s attention. Audiences are scattering in a way they [big media] don’t know how to deal with on their traditional platforms. Going forward, it will be a partnership between the digital world, the digital personalities, and mainstream media to realign what entertainment is.

The sweet spot is when creativity can become business in a way that’s rational. And that, sometimes, is to the detriment of someone’s purity of vision. It’s all about where do you compromise without giving up the core of what it is that you want to say in this world.

Could you give an example of a compromise that you have had to make?

I guess I struggled in taking one show that I did really well—The Guild, where I wrote and produced and acted in for six years—and then I had an amazing opportunity to start a business to do multiple web series at the same time. I went into that venture not understanding that my role would have to shift. So I wasn’t really the creative vision for one show—where I had hands on everything, which is more my personality to be honest—but I would have to shift into more of a managerial role. Not seeing a whole project all the way through, but … trusting other people’s creativity and looking to them to provide the ideas versus mine. That was a struggle, especially the more corporate side of management: financials, finding offices, personnel, health insurance, all those logistics were a lot to scale … from working in my garage. It was a two-year, very hard struggle.

Was there a breaking point?

I talk about in my book literally having a nervous breakdown because of the pressure. And being able to come out of it a much better person. A lot of people live with regret and I know that my career took a turn that was very different from what I would have thought. But I’m very glad, even though there were a lot of downs to the ups, that I went through that process because I know I’m a better person for it. I learn better, I treat people better, I treat myself better. And now my company is even more successful than I could have imagined, even having gone through those tough times.

How did you rebound from that low point?

I had to learn how to delegate much more. I had to actually be very disciplined in protecting myself more than the company. A lot of my impulse is to pour myself into a project to the detriment of my health. Self-care is taking care of your career.

I had to take a lot of time off. I sought help, with my physical and mental ailments. Thank goodness, I had people to steer the ship while I had to divorce myself a little bit. It was just a month I had to go away, but identifying the places where I was weakest in those down times and making it my mission to fill those weaknesses with the best people I could find really relieved a lot of pressure on me and allowed me to concentrate on the things I do best.

Could you tell me a little bit about your business?

Geek & Sundry is a web content company, and I say that because we’re on all platforms. We were created for YouTube in an original content program, where they funded about 100 channels. Mine was one of the few to continue after that initial investment, which really changed the shape of web video because it was such an infusion of confidence and cash into the digital ecosystem.

After two years, I sold the company to Legendary Entertainment, which is a studio in Hollywood. They make huge movies like Godzilla and Dark Knight, but they also have a very large investment in digital. So, my company is alongside Nerdist, and Amy Poehler’s company, which is called Smart Girls.

We have a standing set [and] we livestream six hours a day. We also have an editorial staff.

So, how does your company make money?

We have a lot of sponsorship opportunities, so we do sponsored content. It’s kind of a startup in a sense, but we are under Legendary Digital. We have a lot of interesting long-term monetization plans. They have a lot of trust in the creativity and the audience that we’re capturing.

My viewpoint is pretty unique and the people who are drawn to that have a sensibility that we can make a lot of content for. And it’s not going to be for everybody, but it doesn’t need to be for everybody anymore. It just needs to be for some people, and enough people to sustain a business.

What’s your role there?

I am the creative head of my company, the CCO I guess. I am all about the creative vision and the direction of the company, the short-term and long-term. Sourcing creatives to come in and make things for us, coming up with ideas, looking at new platforms and thinking what can we do with this platform as digital culture shifts and turns, as it always does.

It really is! I have a very firm point of view about what my audience will like. And my audience is very hard core geeks, Comic Con goers, young teens, to families, to older people. We specialize in tabletop games, video games, comic books, cosplay, all the sort of emerging things that really weren’t anything when I first started in this business, but now they’ve become so popular in mainstream culture.

Did you have any idea you’d be doing this? I imagine your first love was performing.

Yeah, my first love was performing, and I still love to perform. But my success has come from not abandoning what makes me different and embracing it.

What would you say makes you different?

I was homeschooled, I went to college when I was 16, as a woman I’m really interested in the subjects I talk about, which are video games and things that aren’t “traditionally” female. But being homeschooled, I didn’t realize there were those limitations. I just followed the things that I love regardless of other people’s judgment. And I think that’s when we can be our authentic selves. If you can harness any part of that in your career, I think that you are winning life.

Speaking of gender, what’s your take on the “gamergate” controversy and sexism in gaming culture?

Gaming has been very fulfilling in my life and allowed me to be myself and feel like I belong. And to have a small minority of people be able to inform and portray gamers as anti-female is very hurtful to me. So I will always be here, being a face of the positive side of gaming and how wonderful it can be to bring a group together and play with them.

How do you feel about how the book turned out? What has the response been like?

The book was a huge investment of my time and I’m so proud of it. And being able to go around the country and see the impact that my company and my work has done—teenage girls saying they love to play games because of me, and families saying, “we picked up a tabletop game because of [Geek & Sundry show] Tabletop,” and college kids who come up and say, “Hey, I’m really glad you made The Guild because I never knew I could say that I was a gamer until you made that”—that’s why you need to be creative, whether it’s on a large or small scale. Even if you impact one person, you’re changing their life in a small way.