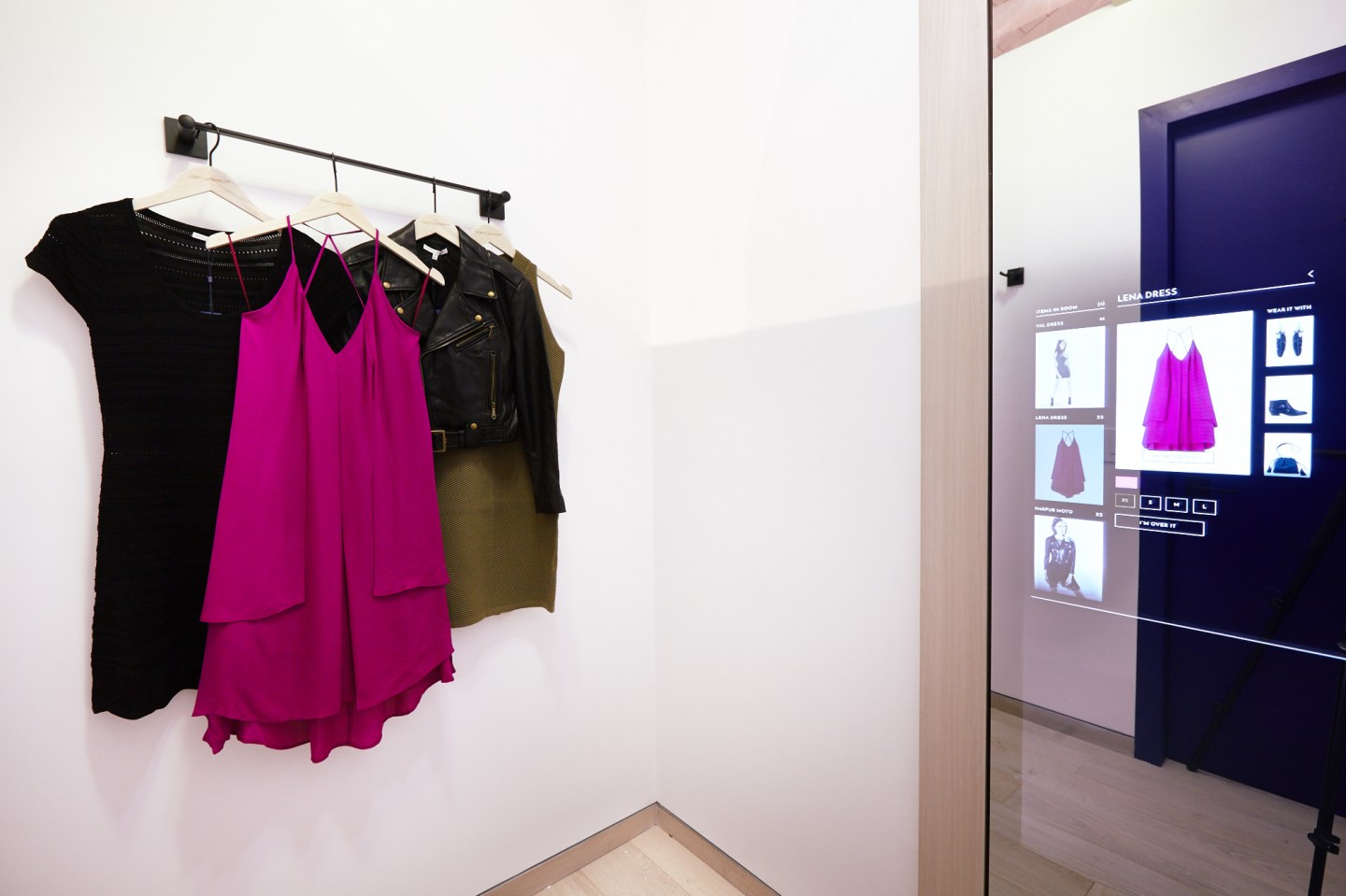 Imagine the scene: you walk into a boutique and are immediately welcomed by smart walls that invite you to approach. A “handwritten” directive encouraging you to ‘TAP’ the screen is followed up by an offer to select both a free beverage and a few new pieces of clothing to try on. A salesperson, armed with an iPad, delivers the chosen items to dressing room, and you receive a text letting you know your fitting room is ready.

Need a different color or size? Want to get a sense of how that dress will look in the evening? You tap the magic mirror in your dressing room to let it know. Not sure if you want to purchase it yet? A list of all the items you’ve tried on in this “session” will be saved and sent to your phone so you can order later via e-commerce.

This is what it’s like to shop right now at Rebecca Minkoff’s new flagship store in Los Angeles, the latest and largest of her growing fleet of “connected” retail stores.

Ten years after launching the accessories label, designer Rebecca Minkoff, 34, and her brother, Uri, 40, run a $100 million lifestyle juggernaut that has made a name, in part, by embracing tech trends as fervently as they follow fashion. “We want to stay one step ahead of the consumer,” says Minkoff in an interview with Fortune, “what does she need now and tomorrow.”

Minkoff was one of the first designers to set up social feeds on Twitter and Tumblr back when each channel was nascent. She also was the first to live stream her runway shows. Last February, the company filmed their New York Fashion Week show in virtual reality so viewers at home could feel as though they were seated in front row, using Google Cardboard with their smartphone. During last month’s New York Fashion week, Minkoff partnered with Intel to use drones, not only to capture aerial footage of their show, but to let the audience see that Minkoff recognizes that fashion-forward young women will likely own a drone in the future.

But the new flagship store in Los Angeles – opened this August– is the Minkoffs’ most ambitious attempt yet to remake the retail experience. In addition to the smart wall and magic mirror technology that debuted in the New York City store last November and in San Francisco in January 2015, the Los Angeles store has a dedicated space within set to showcase “Minkoff Projects” that include art, music, and, of course, technology.

And already, Uri Minkoff says they’ve seen sales jump at these three connected stores. According to Uri, 30% of customers are asking for additional items from the dressing rooms with the mirrors. “The result is we are selling three times the amount of apparel,” he says. Customers who’ve been reluctant to buy during their shopping trips are using their push notifications to make e-commerce purchases later. Data from those sessions indicates that year over year sales in the three cities with connected stores have risen 50%, says Uri Minkoff. A Chicago store will open later this year.

Still, there is skepticism in the industry about how significant these tech innovations actually are. Sucharita Mulpuru, a Forrester analyst who specializes in e-commerce, for instance, notes that Rebecca Minkoff was launched about the same time as Tory Burch. Yet Burch “is much bigger and more successful, it seems, than Rebecca Minkoff,” she notes. (The privately-held Burch is estimated to generate a $1 billion a year in sales. ) “And the last I heard I don’t think Tory Burch has magic mirrors in its dressing room, so magic mirrors aren’t essential for a successful retail business.”

Mulpuru also questions the appeal of this technology to millennials. “The digital store is interesting, but way ahead of its time,” she says. Based on her years of analysis of multichannel retail and consumer behavior, Mulpuru says she believes customers aren’t asking for this sort of technology and very few of them will use it.

Pam Danziger, founder of Unity Marketing who studies consumer spending in the luxury space, has a different take. She says affluent, female millennials – whom she calls HENRYs (high earners not rich yet) – may be receptive to the technology. According to her research, about two thirds of these women are shopping in brick-and-mortar stores, and they spend about 20% more time shopping in physical stores than they do online. The key for retailers like Minkoff, Danziger says, will be to integrate the technology in a way that enhances the in-person shopping experience instead of just trying to wow with bells and whistles. “Why go to all the trouble to go to the store,” Danziger asks, “if you can instant-message a sales clerk online from the comfort of your home?”

Rebecca Minkoff says that is precisely what they’re doing — using digital technology to help the retail experience become more personal and personalized. “Now we are helping in a way that is more meaningful,” she says. For instance, when you’re shopping in the L.A. store, if you need to figure out which shirt will go with a pair of pants, one swipe at the magic mirror will tell you what Rebecca advises. “I can be the person they are getting a great recommendation from,” she says. “We’ve never had the designer voice at retail,” her brother chimes in, adding reaction from consumers has been “great.”

He also says that the “stylists” – which is what Uri and Rebecca call the sales associates– are excited about the possibilities. Now, sales staff can know exactly what customers are trying on in the dressing room – down to the size and color – and they can make better recommendations as a result.

And both Minkoffs say they understand what millennials are looking for in the retail experience: they either want to shop anonymously, as they do online, or they want to be pampered and treated like a VIP. With the technology, Uri says, the salesperson can do either. “It allows [sales staff] to let the customer lead instead of having a random conversation about music or hobbies,” to get a sense of their preferences, he observes. “They are able to see a person’s style based on what they pick, on their first move [in the store].”

Mulpuru, however, contends that in the end, it’s about the product, not just the process. “What is successful is making sure that you have the products that people want to buy and if you don’t, that you help your shoppers find those items so you don’t lose a sale,” she says, “That is more important than just about anything.”

Uri Minkoff says he is confident that his sister’s creative design muscle will continue to churn out collections that captivate customers. So he’s focused on perfecting the shopping experience. Hinting that they are about to unveil two new technological innovations to stores in the next six months, he says, “There is a whole laundry list of unpleasant things we are hoping to solve.”

Lydia Dishman is a business journalist covering the intersection of technology, commerce, and innovation. She is a regular contributor to Fast Company and has written for CBS Moneywatch, Entrepreneur, Forbes, Popular Science, and the New York Times, among others.