Here’s why GoPro’s stock is dropping so much 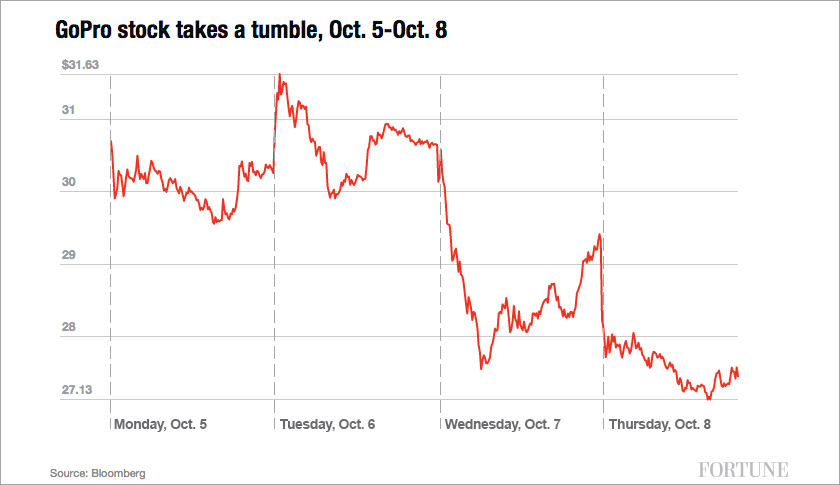 Morgan Stanley says GoPro’s newest camera is a bust, and that’s sent shares even closer to their IPO price.

The Hero4 Session is GoPro’s effort to sell more cameras to consumers beyond the daredevils who made the brand popular. But Morgan Stanley analyst James Faucette said in a note Wednesday that demand looks weak amid mixed feedback about the smaller Hero4 Session, as customers seem to prefer the GoPro Silver’s LCD screen and better video quality. Morgan’s warning came with reduced expectations for revenue and gross margins and a price target reduction to $35 from $62.

“Disappointing demand culminated in GoPro announcing its decision to reduce the price to $299 last week,” Faucette wrote in his research note. That’s a $100 cut from the original price when the camera debuted in July.

But analysts have remained stubbornly bullish on GoPro. All but six of the 21 who cover the stock have assigned shares a “buy” rating, meaning they see GoPro has an ideal investment today. The rest rate the stock at “hold,” including Morgan Stanley’s Faucette, while none recommend selling the shares. The 12-month consensus price target stands at around $65. Shares would need to soar about 135% over the next year to reach that level. The most rosy price target is $105, set by JMP Securities analyst Alex Gauna.

GoPro is a perplexing stock to pinpoint. Revenue for its latest quarter soared 72% to $419.9 million, putting the company in the black with a profit of $35 million. (Last year it recorded a loss of $19.8 million for the second quarter.) Gross margins were also fatter, expanding to 46.3% from 42.1%.

But one of the issues vexing Morgan Stanley is that GoPro devices may remain a niche alternative to the video features already available on smartphones. There may not be enough of an incentive for consumers to drop hundreds of dollars on a video recording device when their phones already have that function.

“We think the latest video editing and sharing features on the GoPro mobile app are steps in the right direction, but trail the features already available in video editing apps for Android and iOS,” wrote Faucette.

In September, a Barron’s report predicted GoPro shares could drop to around $25.