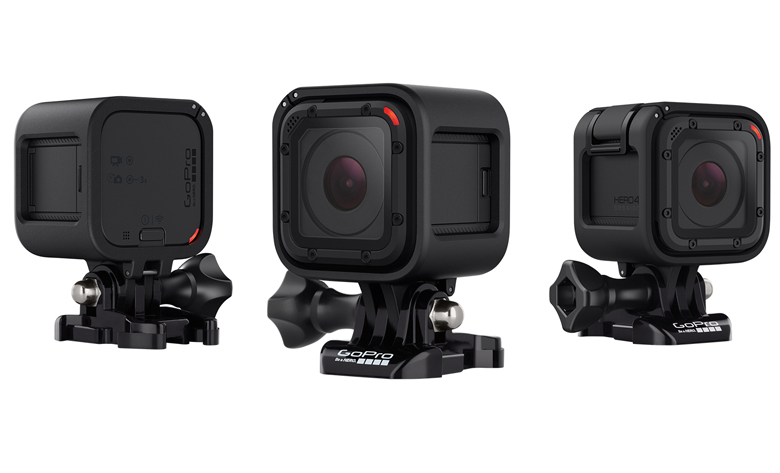 GoPro (GPRO) has sold millions of its tiny action cameras around the world. The cameras are commonly used by daredevils and thrill-seekers as a reliable way of capturing near-death adventures.

For this reason, I’ve always shied away from buying a GoPro.

I’m married, a father of three, somewhat out of shape, and constantly have a smartphone with a capable camera nearby. I don’t ride a BMX bike down mountains or surf, nor do I jump out of planes on the weekends. For all intents and purposes, I’m a normal person living a somewhat boring life.

For the last three weeks I’ve tried to answer a simple question: Does a GoPro make sense for someone like me?

I used GoPro’s $399 Hero4 Session, the smallest camera the company has released to date. The 1.5-inch cube is waterproof and built to withstand a fair amount of abuse. The Session boasts 8 megapixel photos and up to 1440p videos.

To test its resiliency, I let my kids record themselves playing outside on multiple occasions. The Session was thrown, dropped, kicked, and licked (remember, it’s waterproof). To my surprise, the camera withstood the abuse; all the while recording the interaction and dialogue between the three of them.

The most annoying aspect of the Session is the long delay between after the record button is pressed and when the camera actually starts recording, which I estimate to be around two seconds. It’s a number that feels like an eternity when you desperately want to capture a moment, and because of this delay a few moments were unfortunately missed.

The Session lacks a screen for viewing shots taken or setting adjustments, relying instead on the GoPro smartphone app for the added functionality. Adjusting the camera’s settings is easy once you’ve connected the camera to a smartphone device, but the process doesn’t lend itself to quick changes on the go. Not to mention, leaving Wi-Fi turned on will eat into the device’s overall battery life.

Meanwhile, I also reviewed the $399 Hero4 Silver. The backside offers a display with touch capabilities for setting adjustments, to frame shots, and view content. I appreciated the screen more than I thought I would after having spent time with the Session; there’s something to be said about quickly reviewing a photo or changing a setting.

The Silver shares the same price tag as the Session, and that’s where the similarities between the two cameras end. The Silver offers a removable battery, up to 4K video capabilities, and 12MP photos.

An extra housing is required in order to weatherproof—or in my case, dog proof—the camera. I used GoPro’s Fetch harness to attach the Silver to a farm dog, hoping to catch him run wild through the fields and water-filled ditches that come with the turf. At the end of the day I was left with a 45-second video of the Great Dane-Mastiff mix running at full speed. The end of the clip flashes a barbwire fence and then the sky — a dog’s mechanism for removing a GoPro from his back.

During my time with both devices GoPro updated its smartphone app, adding the ability to quickly trim a video clip directly on your phone and share it with friends, family, or your various social networks. It’s far from a robust editing tool, allowing you to quickly remove the 5, 15, or 30 second section of video and share it.

You can’t splice two clips together or add any text to the video, but it’s a step in the right direction. I would love to see a dedicated smartphone app from GoPro offering a more robust editing experience, akin to the GoPro Studio desktop app where users can import and edit footage.

The Silver’s added functionality and battery quality (all for the same same price as the Session, I might add) gives it an ever-so-slight edge, save for the peace of mind in knowing the Session is ready to be abused without adding a case.

After my time with a couple of GoPro’s, I have come to one conclusion: The GoPro is the modern-day version of the video camera. Its marketing campaign will have you believe it’s designed for those living life on the edge, but I’ve found it to fit right into my adrenaline-free life. I now have hours of video that my wife and I have watched and laughed at, numerous times.

Yes, we have smartphones that do the same thing as a GoPro, but there’s something to be said about the simplicity of a dedicated camera. You press a button and it begins recording. You don’t have to worry about a phone call or text message interrupting your video. Furthermore, you can confidently hand a GoPro to a child and let them have a blast without fear of a cracked display on your $700 phone.

Should I ever get brave and decide to go skydiving, well, I’ll have a camera for that too.

Correction: An earlier version of this article misstated the amount of time it takes for the GoPro Session to begin recording. The delay is roughly two seconds, not four seconds.